previous
Jack Bauer is back in trailer for 24:Live Another Day
random
next
Latest trailer for HBO's Game Of Thrones Season 4 is here.
Film and TV
1 like

> Sullivan Stapleton is no Gerard Butler
> Over-use of slow motion

Like it's predecessor, Rise of an Empire is a stylish, blood-soaked flurry of limbs, spears, arrows and this time... boats. It links into Miller's previous work seamlessly, and is enjoyable to watch. The slow motion kicks in a whole lot though.

I’m a huge fan of Zack Snyder‘s 300 – it’s a really stylish, great looking action movie with really charming characters and lots of gore. Plus it’s probably one of the most accurate graphic novel adaptations out there next to Sin City. When I heard that 300: Rise of an Empire was coming out, I was naturally excited, yet pensive at the same time. Even moreso when I found out that Frank Miller was only about 2 issues into the 5 issue series of Xerxes in December.

Running a concurrent storyline with the original 300, Rise of an Empire tells the story of the navel battle fought by the Greeks, led by their General Themistokles (Sullivan Stapleton) fending off Persian fleet, led by the merciless Artemisia (Eva Green). The Persians’ two-pronged attack also had King Xerxes (Rodrigo Santoro) leading his troops on land headlong into battle with the fearless King Leonidas (Gerard Butler) and his brave 300 Spartans.

Although the Persians are led by Xerxes, Rise of an Empire is really all about the conflict between Themistokles and Artemesia as they perform a tactical ballet with their respective fleets. If both characters were male, I’d most definitely be expecting some dick measuring at some point!

When it comes to visuals, it seems that Frank Miller’s source material is always intended for the most stylish of appearances (if the original 300, and Sin City are anything to go by). The style is definitely a major factor here, with slow motion used to accentuate some truly brutal maneuvers. The opening sequence which tells the story of how Themistokles rose to fame has our protagonist cleaving through a ridiculous amount of enemies like they were butter, claret flying around like bloody confetti at the biggest wedding of the year… and holy shit is it a glorious and barbaric sight.

There’s a great effect used during this opening sequence, combining slow motion with the blanching of colour (when lightning strikes during the raging storm). The result is an effect which almost isolates Themistokles while he ploughs through his intended target, making the impacts and sword strikes hit home that much harder and seem more visceral. It’s brilliant. 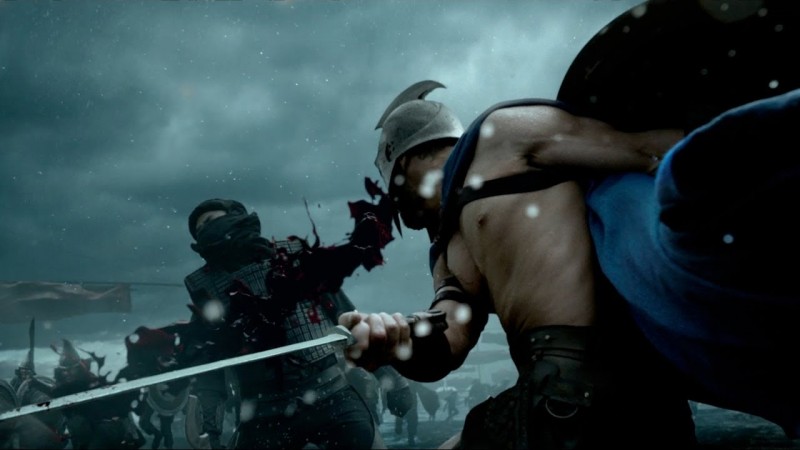 The fighting choreography is excellent, with gore galore

One thing that’s definitely had more thought put into it this time is the fight choreography. 300’s was excellent, and showed the Spartan’s discipline and effectiveness… however there’s so much more style here. More spinning blades, intricate sword movement, flare and brutality makes the fights a real pleasure to watch.

Although the fights are great, there is a lot of slow motion used – admittedly to good effect. It’s not like Murro is using this as a crutch or something – the use of slow motion definitely adds emphasis and intensity to the event… but it is quite frequent. It may be frequent enough to irritate some viewers.

The music in the film is great though – the use of Ozzy Osbourne’s War Pigs is inspired… so much so that it’s used in the film as well as the trailer. There’s a continuing theme played during dramatic scenes that fits the scene perfectly… to the point where I’d really like to get the soundtrack. This music almost sounds modern… like electric guitar-ish, but not quite. It’s great, and doesn’t sound out of place either which is a bonus. 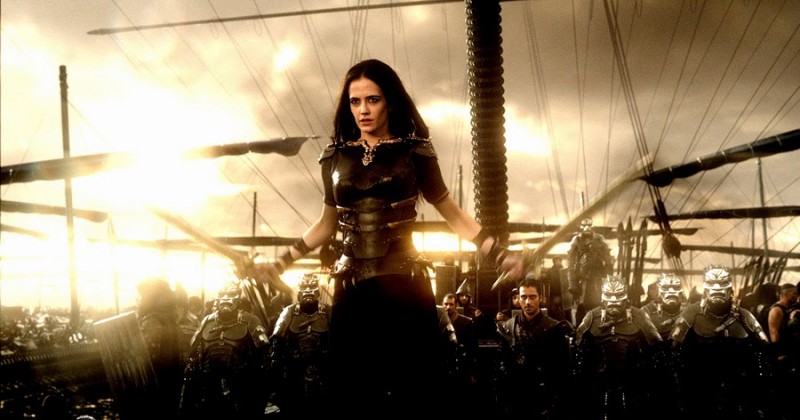 Artemisia is a bit handy with her twin blades

All the cast do a decent job – in particular Eva Green as the devout and rather psychotic Artemisia. She’s got the maniacal look down to a tee with that wide-eyed stare she has. Her annunciation is sometimes a little odd, but I think it adds to the character’s quirks. Of course with a name like Artemisia she’s obviously a Greek, but she has a compelling reason for doing what she’s doing.

Sullivan Stapleton does an alright job portraying Themistokles, but he lacks the gruff charisma and charm that Gerard Butler had in 300. When he’s giving a rousing speech to his troops, it’s suitably inspiring, but you can’t help but think he falls way short of a Leonidas speech. When Xerxes gives his speech, he has a much more commanding voice, even if he is a blinged-up weirdo.

Speaking of Xerxes, Rise of an Empire does go into his origins a bit, showing how he became a God-King following his father’s death. This is definitely in keeping with Frank Miller’s style, but without ruining anything for you… it seems a little… lazy. There didn’t seem much to him becoming a God-King… like anyone could’ve done it if they were bothered, and knew how. 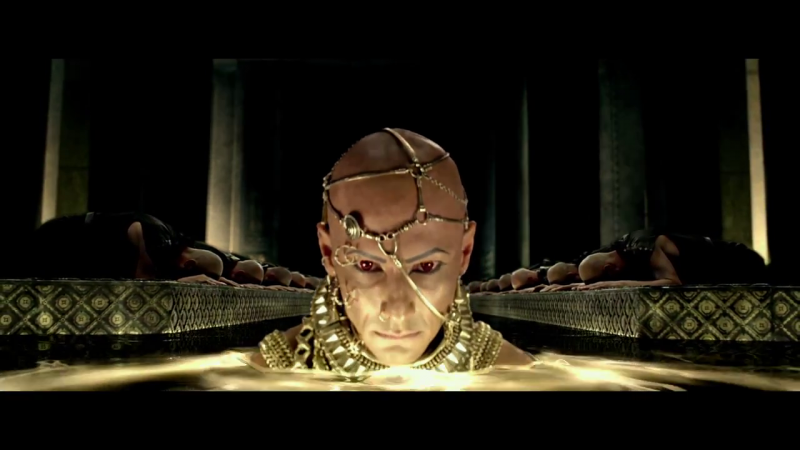 Xerxes doesn’t even bother removing his jewelry for a bath. Eww!

When it comes to the movie’s shortcomings, there aren’t many save for those I’ve already mentioned… Stapleton not being a match for Butler, the over-use of slow motion and some lazy plot points. We’re not able to see how accurate it is compared to it’s source material Xerxes, which may not have been finished by Miller yet. We’ll have to wait a while before it’s released, as at the time of writing there’s no release date.

The original movie was a near-perfect transcription of Miller’s book, with the comic used almost like a screenplay… so I’m hoping that Noam Murro has followed in Zack Snyder’s footsteps and done that as much as he’s able to.

Overall I really enjoyed 300: Rise of an Empire. It’s by no means a perfect movie, and I’d have probably cast some other actors in certain roles, but it’s still an enjoyable, action-packed, blood-drenched, exciting movie. If you liked Snyder’s predecessor, you’ll more than likely enjoy this. If you were one of the ones who criticised 300 for not being historically accurate, then you’ve no business watching this movie either as you obviously missed the point.

Movie and videogame geek, basketball player, guitarist, waffle connoisseur & expert in being a slacking bastard. You'll find me gaming on PS4 as "SpasmicPuppy" most of the time... I'm addicted to Destiny.
More Goodness
300David WenhamEva Green