previous
How Did the From Dusk Till Dawn Series Get It So Wrong?
random
next
Star Wars Episode VII Cast Announcement
Film and TV
0 likes

The Amazing Spiderman 2 dispels all fears held over from Spiderman 3 about too many villains as it delivers on an emotional, funny, action packed sequel that massively ups the game from its predecessor and tantalises with thoughts of what's to come in a series that just seems to keep improving.

Amazing. Astonishing. Spectacular. Superior. Sensational. When Spiderman gets titled, it’s never done by halves. So when the cinematic franchise was rebooted following the crash and burn of Spiderman 3, it made a bold step by going with Amazing particularly considering that the first installment, while strong and a definite step up from the previous films, was more “good” than “amazing”. And when it was revealed that the sequel was to feature 3 villains, one of the major mistakes that Spiderman 3 made seemed to be returning to haunt fans from the grave. But oh how wrong we were. So very, very wrong. let’s go to Mr Fantastic to take a look at how you should be feeling right now if you doubted Amazing Spiderman 2 pulling it off. 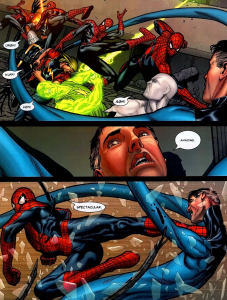 And oh so humble

You’re god damn right, Reed. You see, the mistake made was assuming that because the previous team behind Spiderman’s cinematic outings royally cocked it up, so would the new bunch. What we forgot was that they’ve got a superb cast and a much, much stronger grasp of what they should be doing with the characters. Also, I’m pretty sure the fact that the director’s surname is Webb means that they have destiny on their side. Regardless of the how, they’ve really nailed it. The problem the previous films had, and don’t get me wrong Spiderman 1 and 2 were pretty darn good, was they focused on the serious side of the character and dialed the moodiness and teen angst up to 11. But that’s not who Spiderman is. Ultimately, Spiderman is a light-hearted character who happens to be put through some serious tragedies. This is the element Webb and his team have decided to hone in on, letting Spiderman’s wit and banter, marvelously delivered by Andrew Garfield, brighten the moments of intense action.

They also happen to know how to suckerpunch you right in the feels. It may not be manly to admit but, straight up, this film had me on the brink several times. I honestly cannot put into words just how incredible the combination of elements is. Any fear of overburdened villains was quickly dispelled as the story is guided along the main paths of Electro as the big bad with Green Goblin swooping in for a relatively short but crucial sequence towards the end. Rhino merely serves as an intro and outro action sequence. And yet each villain is given sufficient space to breathe. I may have liked to see a bit more of the Goblin story but with the upcoming Sinister Six spin off, teased most seductively towards the end of the film (make sure to watch out for what’s in those glass cases at Oscorp), I’m happy knowing that’s likely where we’ll get the real pay off. For this film, the real one to watch is Electro. A character who, while somewhat silly in the comics, has been switched up to a villain of true tragedy. A full breathing sob story brought to life by the magnificent Jamie Foxx.

I don’t want to say too much about it but rest assured, this is no 2 dimensional villain. However, as with the first film, the stars are Emma Stone and Andrew Garfield. Separately, the two deliver superb performances. Together? They are truly awesome. It’s the perfect blend of bittersweet teenage awkwardness and just sheer pleasure that they clearly find in each other’s company which is brought to effervescent life by the fact that they’re just too damn funny in how cute they are. Props to both of them because it’s very easy to turn comic book characters into cartoons but boy do these guys breathe and move and live. There are several moments throughout the film where this is turned to full advantage with emotional tugs but there’s a moment at the very close of the film that, in particular for me at least, really worked at the tear ducts. These moments are of course delivered by the actor’s wonderful performances but if there is one perhaps unsung hero to this film it is the maestro himself, Hans Zimmer. Collaborating with The Magnificent Six, the soundtrack to this film is bloody incredible and, rather than simply being pleasant background music, actually works alongside the film to give a aural kick up the arse to scenes. 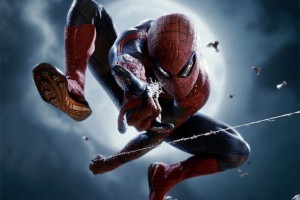 Prepare to be amazed. *pun intended*

Not that they require any assistance. I saw the film in 2D. Usually that’s a good choice as most 3D films really don’t capitalise on the technology and just rip you off with the extra ticket cost. Spiderman is not the same. While the 2D looks dang good, I definitely want to see it in the full, eyepopping 3D. The action sequences are *ahem* electrifying and to see some of the stuff the effects crew have created coming out of the screen seems like something well worth investing in. In the previous film, you saw the Spider learning his craft, working out his place. In this film you see a hero. And, as such, the full on action that is delivered is nothing short of awesome. From super slow mo to super fast, each sequence is something you can fully imagine coming straight out of one of the comics.

And, ultimately, maybe that’s why this films works so damn well. Rather than being a cinematic translation, the Amazing Spiderman 2 feels more like a Spiderman comic has just been hit with some kind of film ray. Andrew Garfield’s webhead may be more gangly than geek, more of an awkward outcast than a loser but who ever said Spiderman could never be cool? I absolutely adore what they’ve done with the characters and, while Garfield may be cooler than what you expect for Peter Parker, he still plays the outcast card brilliantly, being just cool enough that you want to be him even more. AS2 asks a lot of its hero. There is of course just one answer though. “With great power comes great responsibility.” The only responsibility I would ask of you, is to go and see this film. There’s a reason the character’s an icon. This may well be some of the best reasoning yet.