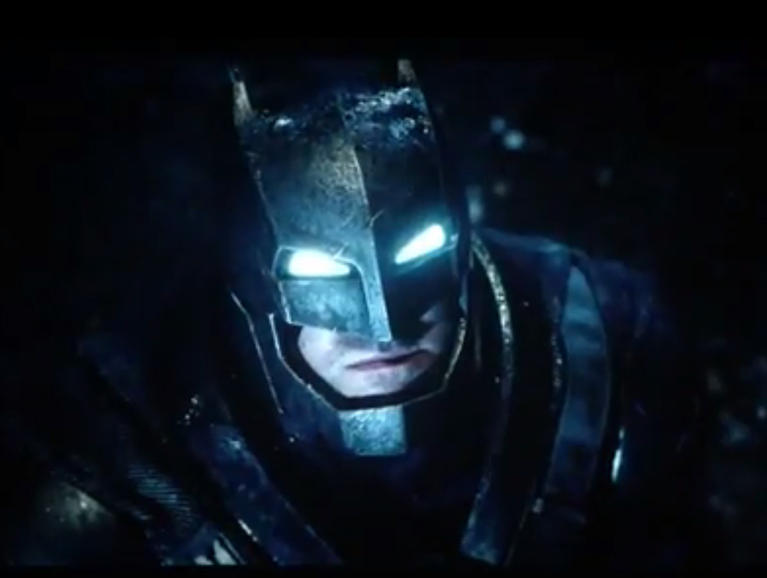 So once again the best laid plans of a multi-billion dollar studio attempting to maximise the hype and anticipation around the release of a movie trailer, have been ruined by nothing more than a fan-boy with a camera phone.

After Lucasfilm were forced to abandon plans to screen the first teaser trailer for Star Wars: The Force Awakens exclusively in cinemas after a screener was leaked within hours, the same fate has now befallen Warner Brothers’ eagerly awaited Batman V. Superman: Dawn Of Justice.

A complicated and confusing campaign which involved a 5-second flash-teaser being released late on Thursday night which was meant to whet appetites for a longer trailer being attached to either Marvel’s Avengers: The Age Of Ultron or Mad Max: Fury Road looks to have been scuppered early this morning when the full trailer turned up online (with added shaky hands and Spanish subtitles “FALSO DEUS!!”).

Hopefully this leak forces Warners to relent and release a full HD version ASAP, as it will allow a million DC fanboys (like myself) to analyse every frame, in the same way that the Force Awakens trailer was dissected after the Star Wars Celebration event in California yesterday. (LOOKS LIKE THEY DID!)

But from behind the blurriness of the screener, here’s what has caught my eye:

All in all, it’s a solid but decidedly bleak trailer. I’m still a little on the fence about the project, but more because I think the Superman character is being left behind and not being given the chance to develop into the franchise that fans deserve – same with Wonder Woman, Aquaman, Cyborg, etc.. They all should have had their own movies to introduce the characters properly and to make the concept of these individuals coming together to form the ‘Justice League’ entity more important.

Warners are way too desperate to have a Justice League cash-cow to compete with Avengers and are letting their corporate greed have a detrimental effect on these iconic characters. On the other hand, Batman will be fine – the character will always appeal to the mass market, and in Ben Affleck hey may just have the actor to bring the comics-centric version of the character that the fans have always craved.