Straight to the point: This film merges homo erotica with the political machinations of the Nazi’s, creating a beautiful juxtaposition between the both sides; a film worth watching, a film worth promoting until your voice is hoarse.

“Christopher and His Kind”, made in 2011 for the BBC, was based on the 1976 memoirs of Christopher Isherwood. This was a film I stumbled across whilst searching for other works by Matt Smith during my Doctor Who obsession. The film is based in Berlin in the 1930s where Matt Smith plays a young man called Christopher Isherwood; an upper class Englishman, who, with an awkward poise and an innocence not quite protected by the English countryside, sets off, bright eyed into the world. His destination; Berlin.

Enter Wysten Auden (played by Pip Carter); Christopher’s monotone friend who lives in Berlin and is the reason for Christopher’s trip. A fellow Englishman, the polarising opposite of Christopher. A cynic, a realist, a poet with a depressive state of mind. We see Wysten introduce Christopher to the one thing he wanted; the boys.
From here on in we are treated to a wonderful escapade of whimsy, innuendos and a flourish of “darling’s” and “dear boy’s”. We watch how Christopher becomes involved with the raunchy, seedy underbelly of the Berlin prostitute business, something which Wysten is a veteran to. 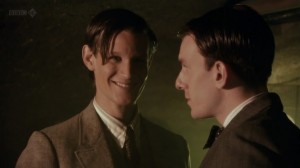 However all is not as magical as it would seem. Tangled in with the sexcapades are the undertones of the political change that is going on within the country; a danger, an ever growing fear, the Nazi rise. Just half an hour into the film we start to see the infiltration of the Nazi’s in the film, just like they almost infiltrated the world; slow to begin with, a few swastika’s here and there planted delicately within the storyline, but then powering through with the force of nothing seen before. We watch as Berlin starts to crumble around Christopher, not only the country, but those he met and held dear. The symbolism is strong with this one. 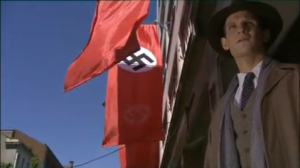 Not even the most politically charged of films can be without a love story. Enter Heinz; a soft, caring young man, a simple street cleaner with a quiet gait about him. He shows us that love does in fact exist, even in the most horrid of times, but then it can be lost; lost amongst the rubble of politics and paperwork, gone forever. However, Heinz also helps to serve a higher purpose than just a love story; he shows us how families can be destroyed and have been destroyed in those turbulent times.

In the end, Christopher eventually moves to America, but takes a visit, once all the chaos has ceased, back to Berlin to visit those he cared for so much. The film ends by Fraulein Thurau handing Christopher the clock which once sat in his room; the only thing to survive the war, and the one thing the film opens with.

This film is a splendid example of how even in the worst of times, we can try and find the best of times. The juxtaposition of sexually repressed, ‘stiff upper lip’ England and the sexually prominent, ever changing Berlin is both wonderfully eye opening and brilliantly done. The film immersed me in the culture and events going on at that time, but also, the film was not afraid to take a firm grasp on those subjects which some may find taboo and make them into a thought provoking cascade of emotionally charged wonder.

I would definitely recommend this film to anyone who is looking for something ever so different to the boring “oh-my-god-not-another-one” type of wash being spewed into the cinemas today. Amongst the nudity, raunchy homosexual conquests and a strong lead character, played by a strong lead actor, someone will find something that will light up that dusty bulb in their head and make them think, make them smile, make them laugh, and never forget about Christopher and His Kind.

Here is me in the form of a haiku: My name is Jodie, Love fun, love hugs, loving life, To write is to be.
More Goodness
BBCgaygermany