previous
Empire: X-Men Days Of Future Past Exclusive
random
next
Sundance Sneek Peek: Films to Look Forward to in 2014
Film and TV
1 like

A few days ago Whovians were treated to the first official ( i.e.  not sneakily leaked) look at what Peter Capaldi’s Doctor is going to dress like. In short, he should probably front Joy Division in this get up: 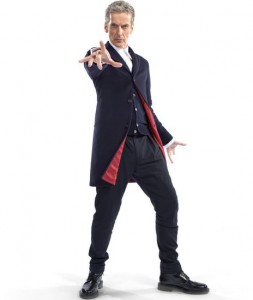 “Livin’ after midnight, rockin’ to the dawn”

This style seems a bit darker than the Doctor’s last few regenerations, possibly this is to reflect  a darker tone in the upcoming series.A dark coat with vampire lining and DMs that could deliver a kick to the groin that would make a Cyberman cry, it would seem that this Doctor means business. As excited as I’m sure you all are, the few comments we’ve heard from the Capaldi/Moffat camp are somewhat worrying to say the least.

When asked about his choice of costume, it seemed that Capaldi made a dig at the doctors of the past stating that the style was “Simple, stark, and back to basics. No frills, no scarf, no messing, just 100% Rebel Time Lord”

This has the connotation that we might be seeing a more angry, or possibly even violent doctor. This of course could be on purpose, lest us forget that just before The Doctor’s latest regeneration  he straight up murdered 3 Daleks with the magical, never-been-used-this-way, wasn’t-that-a-useful-plot-device powers granted by the parallel dimension bound Time Lords (also, conveniently, granting him umpteen more regenerations).

This sentiment was echoed by long-time series’ writer Stephen Moffat, who issued the warning that it was a “New Doctor, new era, and of course new clothes. Monsters of the universe, the vacation is over – Capaldi is suited and booted and coming to get you.”

Shooting has already started in Cardiff, so it’s only a matter of months until we can confirm or deny any of these theories/rumours.

Excited for the new era? Think Moffat’s lost the plot? leave your rage/love below. It’s okay, we understand.

Hailing from Kent, England, Mike is a writer, editor and podcaster who has just finished his degree at CCCU. He also is a drummer of 11+years, plays in several bands, and is available for session work. His other interests are Batman, music which doesn't suck and pizza. Follow Mike @The_Dark_Mike
More Goodness
breakingDr WhoMike Orvis