previous
It's Official: The Hateful Eight is Cancelled!
random
next
Empire: X-Men Days Of Future Past Exclusive
Film and TV
0 likes

It would seem Marvel are stepping it up; first the announcement that Lady Sif to make a guest appearance and now the addition of a classic. Through season one of Marvel’s Agents of S.H.I.E.L.D  we have unknowingly witnessed the origin story of Marvel classic character Deathlok –  a cybernetic soldier with enhancements granting super strength, super speed and a high tech eye among other advantages.

Marvel have today confirmed that recurring character Mike Peterson – played by J. August Richards – is to be reintroduced as Deathlok in the 4th of February episode. It was obvious Peterson was going to become something more and I expect the fans will be happy it has turned out to be a classic character from Marvel canon; something the series has been lacking.

[box_light]”We have been waiting all season for this moment where we can reveal that Mike Peterson’s story arc is an origin story,” said Executive Producer Jeffrey Bell. “We’re thrilled to have J. August Richards playing Deathlok and to have our audience enjoy this favorite Marvel character on the show.”[/box_light] 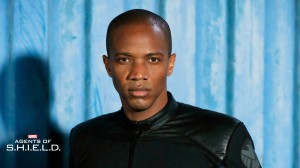 It would seem J August is just as thrilled about playing a superhero:

[box_light]”If you would have asked when I was nine-years old what I wanted to be, I would have said a super hero and I’m so excited to be one now as an adult on TV!” added J. August Richards. “It’s a dream come true.”[/box_light]

Coincidently or not, this year marks the 40th anniversary of the Deathlok character who first appeared in Astonishing Tales #25 and has had at least three different characters take the name – including S.H.I.E.L.D espionage agent Jack Truman. The last time we saw Mike Peterson he had been captured by Centipede, probably to be used as a weapon. Marvel say this incarnation will have to “struggle to find the man in the machine” and it can be assumed the “struggle” will involve switching sides and may be joining the S.H.I.E.L.D team…who knows? Of the answer is Marvel but for now they are keeping quiet.

Are you excited about this reveal? Which Marvel classic character will be next? Who do you want to see? As always comment below!

Editor and occasional writer for Geek Pride! I prefer Star Trek over Star Wars, collect comics and wish I could be a superhero one day. I tabletop RPG as well as a little gaming, design the odd t-shirt now and again, update my Geek Parenting Tumblr and when I have cash to spend (which is rare) I scour the internet for Wonder Woman collectables. Also Doctor Who and Firefly rock!!
More Goodness
breakingcomicJ. August Richards