previous
Original Robocop Art up for Auction - Own a Piece of Cinema History!
random
next
The Grudge - Rebooted...
Film and TV
0 likes

Fast paced, kept me on the edge of my seat for most of the movie's run. Great acting from all actors.

A little too much exposition, no Dauntless Cake, too little development for the supporting characters

I genuinely didn't expect to like this movie as much as I did. 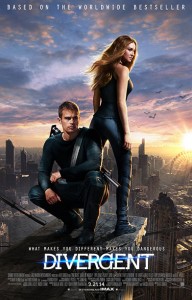 For those of you who aren’t familiar with the trilogy, Divergent is the book that sets the tone for this dystopian future/post-apocalyptic story. The tale of Tris, a girl that defies her family valus to choose her own path in life, is what has fascinated readers all around the world, and when the news of a movie broke out, it was met with both excitement and dismay. I found myself somewhere in the middle and with each poorly directed, poorly acted, poorly edited movie adaptation of a book I loved, I was getting more and more despondent.

I was happy to leave the theatre yesterday with the confidence that it can still be done. With a good script (even though some of the relevant for the plot bits of information were cut out), great acting and great directing, Divergent actually kinda rocked. Yes, I know, not very scientific of me to say that, but when a movie based on a book you’ve read and know inside out still manages to keep you interested and on the edge of your seat, wondering if your favourite characters will survive, you know they got it right.

The one thing that I felt was a little off was the extended exposition. While it worked perfectly fine for the book (and was necessary for the non-readers), it was overly long and forced some important plot points out, in order to set out the stage for events yet to come.

Long story short, in a dark, somewhat gloomy future, kids are asked to choose where they want to spend the rest of their lives, whether in their own faction (since the world is divided into five such factions) or in another one, based on an aptitude test, but also on personal choice. I don’t think it dawned on me until now that this is why people kept saying that Divergent borrows from Harry Potter, but I suppose aptitude test=sorting hat. I guess all those tests we take in high-school make us all wizards. Every now and again the aptitude test is inconclusive, for people that fit in no nice category. Those are the feared Divergents, those that can’t be quantified, who think outside the box and can’t be controlled. Once the choice is made, no one can contact their families again and must conform with the rules of the faction of their choice.

Tris, a simple Abnegation born girl, decides to leave the peaceful, somewhat stifling world behind and joins the Dauntless, the crazy soldier type people that jump out of trains for fun or climb high buildings to get their adrenaline pumping. After a very rocky start, she makes a few friends, including the revered Four (Theo James), who she later discovers is a Divergent, like her; she becomes one of the best and eventually ends up saving the day after Janine (Kate Winslet), a member of the Erudite faction, decides to take over the world by force. 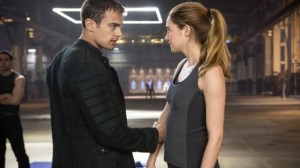 The movie is fast paced, as I mentioned before. I hadn’t even noticed the time fly and it’s over two hours long. There are action scenes after action scenes and they still managed to squeeze in enough character development (at least for the two leads) to make them likeable. I was a little disappointed that the supporting characters weren’t as well developed, with them being relegated to second fiddles. I suppose from a reader’s point of view, the missing information wasn’t as crucial, since we knew it was there, but for those that had never touched the books, it will come as a surprise, if Insurgent (the second instalment) ends up being made. Perhaps they will re-create them through flash-backs, who knows? All in all, it was a fantastic film and after being completely let down by many others, like I said, it came as a nice surprise.

The acting was stellar on all accounts, even the characters that had very little screen time were played with enough intensity to keep us interested and Shailene Woodley and Theo James proved that they can carry the weight of such a franchise on their shoulders. Kate Winslet was surprisingly villainous as Janine, something I hadn’t expected from her, though in all honesty I’m not familiar with a lot of her word and Miles Teller, who plays a bullying psychopath sure made those traits of his character believable. I don’t think there’s anyone that I could complain about without simply nitpicking.

The score is fantastic, something that’s true for most movies that have come out lately, particularly those in the same vein, such as The Hunger Games and it will not disappoint. Ellie Golding, Snow Patrol and Skrillex being some of the artists that have come together to enhance the emotions present on screen through their music.

With some minor complaints, Divergent gets nearly perfect marks from me. Go watch it and let us know what you liked (or didn’t like about it).

What's there to say about me? I love the sci-fi and fantasy genre when I read, but I am in no way limited to that alone. I do think Frank Herbert deserves a statue for his writing(if there is one, point me in that direction, please). I enjoy writing quite a lot, but I am also kinda lazy. If you want to make me happy give me books or Doctor Who collectibles. Or a real TARDIS, in which case I will love you forever.
More Goodness
allegiantansel elgortdivergent