It's witty, engaging and slightly off the wall.
It features a stellar cast.
It stays true to the core integrity of what Frank Sidebottom represented.
The soundtrack is phenomenal.

I'm clutching at straws with this, but the lack of a Mancunian accent!
The ending is slightly predictable, but none the less still enjoyable.

Go and see it. You will either love it or hate it, but it's very much one of my top picks at Sundance London!

It’s a well documented fact that I like quirky films, and after today, I have to say they don’t get much quirkier than Frank, the latest piece of cinematic joy (and I do mean joy, because I absolutely loved it) brought to us by director Lenny Abrahamson.

The movie follows the trials and tribulations of Jon (Domhnall Gleeson) a young musician, who joins an eccentric band led by the enigmatic and charismatic Frank (Michael Fassbender), after whom the film is titled. As a newly recruited member of the band, Jon’s soon whisked off to Ireland to record the band’s album and documents this journey and process online. His escapades earn him a fairly grand following, and soon the band is invited to perform at South by Southwest festival. Things don’t always run smoothly however, and that’s part of the point, but all the way throughout, there’s this real question about the integrity of the music and following Frank’s ideal of playing music for the sentiment it can convey, not just for success. 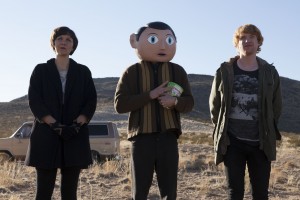 It’s not difficult viewing to get through this film, and admittedly I was a bit gutted it had to end at all. I went in primarily because it was a Fassbender film and because Frank Sidebottom is from my neck of the woods! There’s something about that iconic papier-mache head that will always scream Northern pride to me, and even though this incarnation of Frank, isn’t Frank Sidebottom himself, I think a lot of Fassbender’s role stays true to the integrity and spirit behind what Frank represented. (Which is why, I’m willing to discount the American accent, because it honestly didn’t bother me in the slightest.)

Domhnall Gleeson as always did not disappoint, and I think he really did do a wonderful job of encapsulating the frustrations and ambitions of Jon in a way that’s both realistic and entertaining to watch. It wasn’t a rigid set in stone mentality, but a fluid one that I thought connected really well with the audience. Also, that beard. Seriously. I was impressed with that beard (although presumably it was the make-up department’s handiwork…) either way, it gave a lot of scope and humour to the plight of recording for 14 hours a day, for 11 consecutive months!

Which is actually one of the things that I think really made this film work. The humour is so casual and so well orchestrated and delivered, it’s not an in your face kind of wit. Whether it’s Frank’s description of his facial expressions, or the slightly avant-garde personality quirks of him as a person, he’s not just a gag. He’s this wonderfully infectiously positive person, and he radiates charisma, right up until the point he’s struggling himself. 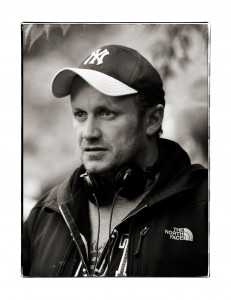 I also have to give credit where it’s due to the sublime Maggie Gyllenhaal for her role as Clara, the aggressive and slightly cut-throat bitch-esque sidekick to Frank. For someone that was so outwardly vicious for lack of a better word, I think Gyllenhaal really managed to portray some of Clara’s own longing and attachment to Frank in a way that made me really feel for her. It was almost justifying her behaviour in a way, especially when Jon calls her up on it later, as to why she’s so determined to push everyone else away to keep Frank and the rest of Soronprfbs from performing on a large scale.

The highlight for me though, has got to be the soundtrack. From the weird to the wacky, confusing to catchy, it’s all there. The performances put in by the cast were phenomenal, and I’m admittedly going to go and re-watch it again, purely for the privilege of tangling myself up in the soundtrack to my own personal idea of serenity. I loved this movie, adored it even, but as one of my fellow journalist’s so rightly said, it’s very much a Marmite film. You either love it, or you hate it – which is why I urge you to see at at Sundance London this weekend if you can, or once it opens for general release on May 9th!