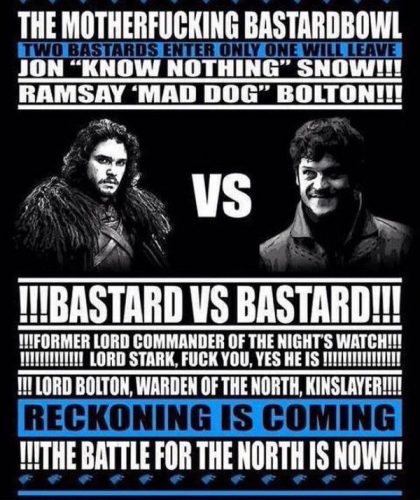 This article is SPOILER-tastic, so if you haven’t watched the latest episode, protect your pretty little eyes now and turn back before it’s too late. Seriously, bugger off.

It’s the event we’ve all been waiting for, Bastard Bowl 2016. However, in true Game of Thrones fashion, we’re thrust headfirst into the battle at Meereen, where Daenerys isn’t looking best pleased with what’s happened in her absence. Sort of serves her right for flying off on Drogon at the end of season four really, where she left her people (lover-boys included) to fend for themselves against the Sons of the Harpy.

With Meereen under attack from the Masters, Dany is looking super-pissed and ready to burn some bitches up. After meeting with the Masters to discuss terms of a surrender, from them of course, the Dragon Queen is certainly living up to her name. Uttering the words ‘my reign has just begun’, Drogon arrives and I’m half-expecting her to bugger off again.

Instead, I utter a massive ‘huzzah’ as Viserion and Rhaegal burst from their cave and join their Momma and big bro in the sky. We’ve been waiting for this moment for a good couple of years now and the show really delivered here, along with the entire Dothraki army finally reaching Meereen and joining the party. 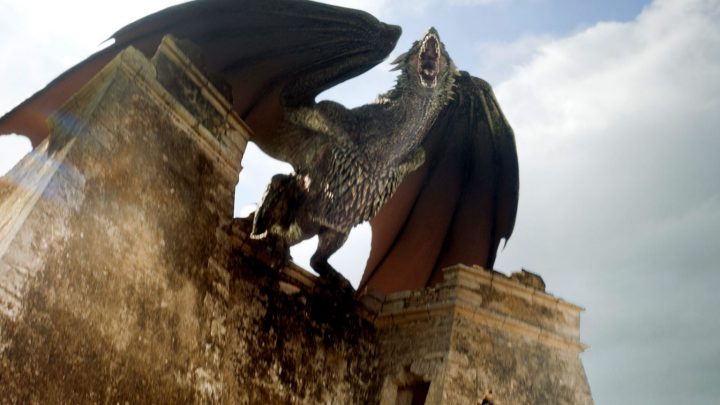 As Dany commands ‘Dracarys’, it’s becoming slightly reminiscent of the Mad King’s famous line ‘burn them all’, which could indeed be foreshadowing our beloved Mother of Dragons going all dark side on us in the future. She’s certainly become a much less forgiving ruler, favouring a more violent approach for settling her problems. However, Tyrion’s attempt at peace resulted in the attack, so I’m all for burning the slaver to a crisp. 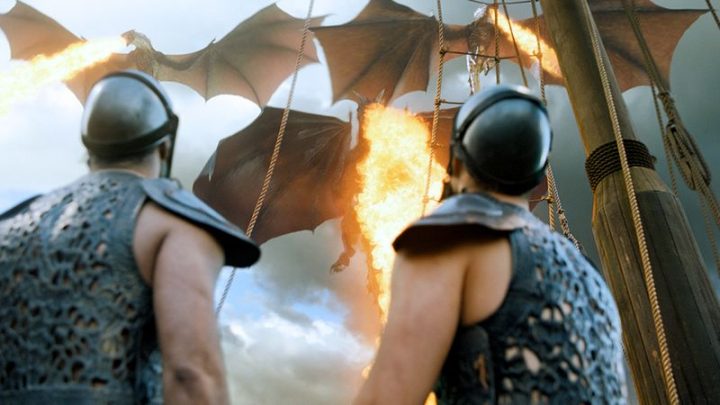 Finally, we head over to Winterfell, where Jon Snow and Ramsay Bolton finally come face to face. As Jon attempts to encourage Ramsay to fight him one-on-one, the Bolton Bastard shows his cowardly side, admitting that Jon may well beat him in the ring. Instead, Ramsay opts to hide behind his army, attempting to get Jon and Sansa riled up in the process. In this episode we really see Sansa develop as a character and live up to the Stark name as she threatens Ramsay and speaks frankly to Jon. She doesn’t think Rickon has any chance of survival, which is what we’re all certainly thinking right now. It seems pretty unlikely that he’s going to escape unharmed, especially as the rightful Lord of Winterfell.

After discussing battle preparations, Ser Davos goes for a little stroll in the snow, where he comes across Shireen’s Stag figurine, which has been burn to a crisp. The look on his face is one of sudden realisation of what happened to the poor little Baratheon at the hands of her father and the Red Woman. Things aren’t looking so good for Melisandre and I’m pretty sure that she’s going to meet her demise at the hands of Ser Davos next week. That is, if the witch can actually be killed, so I’m hoping that it doesn’t end badly for the lovable Ser Geordie. 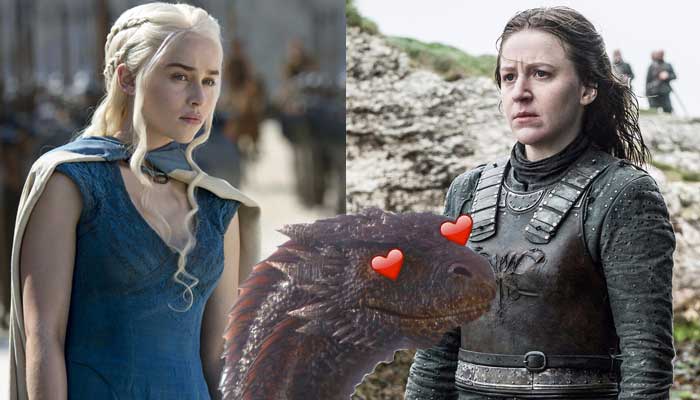 We head back for a brief interlude in Meereen, where Theon and Yara have made a pretty speedy trip and arrived for an audience with Daenerys. After some serious ass-kissing from Yara, going all female empowerment with her speech, the trio form an allegiance in return for one hundred ships from the Iron Fleet. Dany really does have some serious power behind her now and her claim for the Iron Throne is going to bring some serious competition. Perhaps there’s even another romance in store… 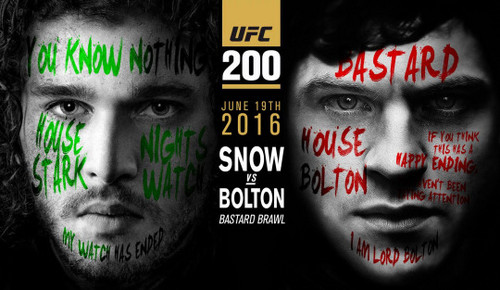 Bastard Bowwwwwl. Jon’s army really does look a little pitiful against Ramsay’s crew, who aren’t charging in the manner that our boys were hoping for. Before long, Ramsay brings out poor Rickon on a leash and it’s pretty obvious from that very moment that the littlest Stark isn’t going to escape this battle unscathed. What ensues is perhaps the most difficult scene I’ve had to watch on Game of Thrones, on par with Shireen’s awful death.

We all know Rickon isn’t going to make it to Jon, but I’m still watching on the edge of my seat and screaming at the television, whilst my Sister bawls in frustration as Jon races towards his little brother. As the arrow hits Rickon, I’m still shouting at the TV for Jon to back off, with his army urging him to do the same. However, Ramsay has exactly what he wants, with a lone Jon racing towards his army, unable to control his emotions. For a moment, I thought that was it, we were going to lose Jon once again, especially when the arrows took down his horse and he went on foot. As Ramsay’s army charges towards Jon, I was positive he’d be killed, all guns blazing and avenging his poor little brother. Instead, what ensued was what was quite possibly the best battle sequence I’ve seen on TV or film, earning the Battle of the Bastards a firm place in my top five, nay, top three, episodes of Game of Thrones. 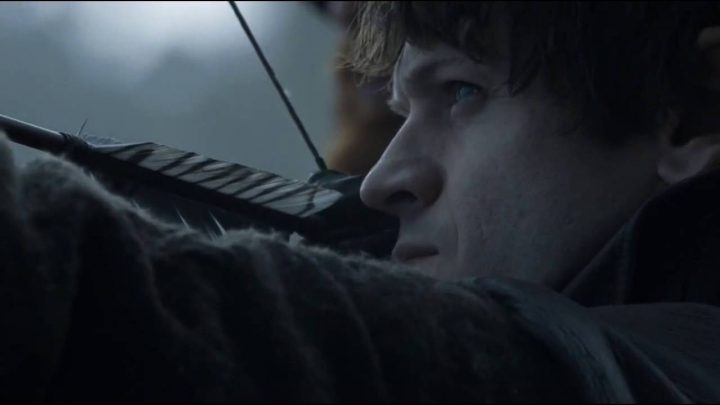 I could go on for hours about the battle itself, there were some utterly incredible scenes and it delivered beyond all expectations. We’re constantly fearing the lives of Jon, Tormund, Ser Davos and even our Giant friend. I’m fairly sure that my heart stopped on multiple occasions, particularly when Jon becomes buried in the sea of scrambling bodies and I once again feared for his life. The moment in which Petyr Baelish and his Knights of the Vale arrive was absolutely outstanding, at a time when I’m pretty sure everyone thought that all hope was gone. Ramsay certainly wasn’t prepared and bolts (badum-tssh) indoors to escape the wrath of Jon and co., who aren’t ready to stop there. 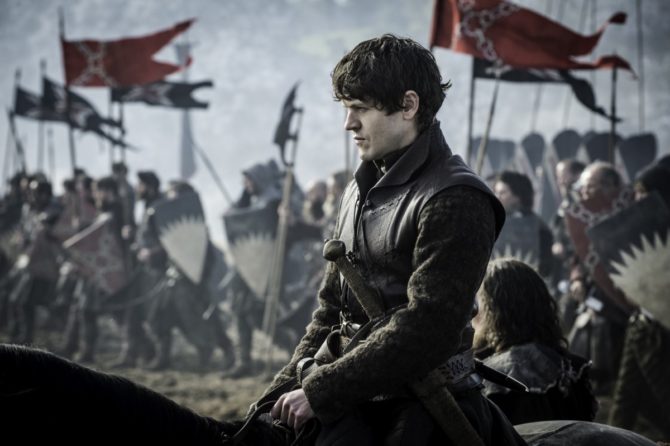 Thankfully, Tormund and Ser Davos also survived the battle, but let’s spare a moment for Wun Wun the giant, who has fought valiantly for Jon since he was his saviour at the battle of Hardhome. Now, for the really good shizz, the ultimate Bastard Brawl. It was clear from the start that Ramsay was no match for Jon in a one-on-one scenario and I was utterly delighted to see the Bolton Bastard beaten to a bloody pulp. I half expected Sansa to finish Ramsay off with her final act of vengeance, but what we got was so much better.

I’d often debated who should be the one to deliver the final blow, hoping that either Sansa or Theon would find some sort of justice in murdering that horrendous creature, but seeing Ramsay ripped apart by his own hounds felt like the perfect punishment. Whilst rather grim, I fist pumped and cheered as Sansa watched the hounds nomm away. 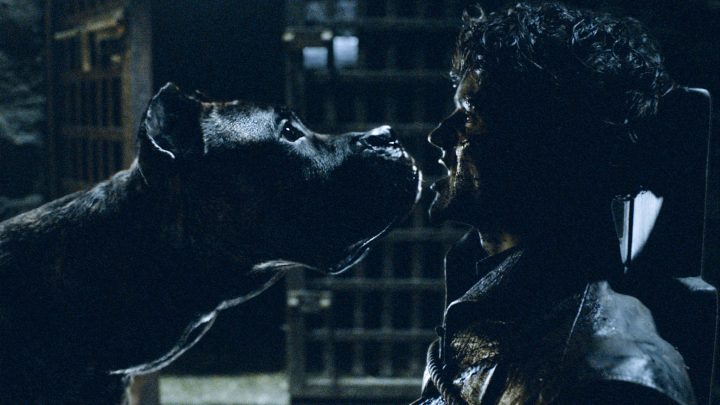 ‘The Battle of the Bastards’ was without a doubt one of my favourite episodes of Game of Thrones, earning a place up there with ‘Hardhome’, which I really thought couldn’t be beaten. The battle itself was incredible and the show delivered on all counts, whilst also being devastating in parts. Rickon’s death was tragic, but unavoidable at this stage and we all knew it was coming. Sansa finally got her revenge, but this could definitely be the start of something more sinister for her character, especially with Littlefinger in tow.

Next week’s finale looks set to be another big one, with the major focus set to be Cersei and Loras’ trials at King’s Landing. Is Cersei going to blow the place up with Wildfire, or will she meet her demise? Is Margaery going to keep up her ruse, or will she be victim to the High Sparrow and his cult-like following? For me, I’m mostly intrigued by Walder Frey hosting another one of his infamous dinner parties, with Jaime Lannister as the guest of honour. Perhaps we’ll have another repeat of the Red Wedding and another face will make an appearance… Who knows. What we do know, is that it looks to be another belter of an episode, but will it top the season five finale? We’d love to hear your thoughts and predictions for next week. For now, take a look at what’s in store in Westeros.

I'm an aspiring film journalist living in Chester. Into all kinds of geekery from N64 to Xbox, graphic novels, cosplay anime and more. I have an unhealthy obsession with Pokémon and the Legend of Zelda series. So much so that I have two Zelda tattoos and various Pokémon lurking all over my house. In my spare time when I'm not busy being a real person and working, I'm writing or making retro games jewellery. I'm also obsessed with pandas. They're fabulous.
More Goodness
boltonDaenerysdragons