Scott Teems, based on characters created by John Carpenter and Debra Hill.

Well made and brilliantly executed.

Ultimately unnecessary, as Laurie's story was resolved in the last film.

Well made but lacks a sufficently strong plot to justify its existence.

In 2018 all of the Halloween sequels, including the divisive Rob Zombie Halloween films, were retconned out of existence by the release of Halloween, which acted as a sequel to the original film.  The Halloween film released in 2018 was surprisingly good, as it brought the story back to its roots and concluded with Laurie Strode finally confronting Michael Myers.

Halloween Kills seeks to continue their story.  Michael Myers is still not dead, and the residents of Haddonfield, the fictional town that he stalks, seek to face their fears.  This is where the film falls apart.  The Halloween films have always been about Michael Myers’s obsession with Laurie Strode.  Introducing the wider Haddonfield community dilutes the original theme and plot.

That said, Halloween Kills is not a badly made film.  It looks amazing, and has some fantastic shots.  Of note is the scene where Michael Myers (played by James Jude Courtney) stands backlit by flames as he confronts firemen.  Likewise, Jamie Lee Curtis is fantastic in the role of Laurie Strode, as she carries the haunted look of a survivor who is slowly overcoming her demons.

Likewise, the rest of the cast are well played.  There is a moment during the film where everyone is celebrating the anniversary of Michael Myers’ capture and each person has a smile filled with regret.  The problem is that the mob that forms to defeat Michael Myers is too large, limiting the amount of time for developing their characters. 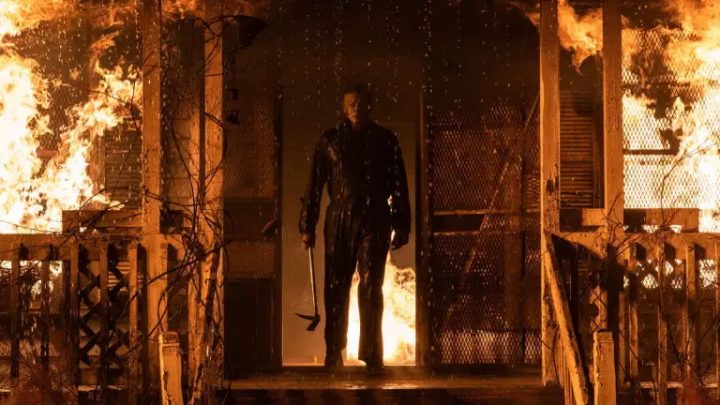 The result is that when they do perish (it is Michael Myers after all…), we feel no sense of loss for their deaths.  Instead, we simply move on.  The deaths are suitably graphic and gruesome, with some truly amazing special effects.

Unfortunately, it is the plot that lets this film down.  Whilst the dialogue is fine, the plot never really justifies the existence of this film, as the entire storyline of Halloween was concluded with the previous film; Laurie confronted Michael and won.  Even Laurie spends most of her time in hospital, leaving the mob to confront Michael Myers.  This film, as well made as it is, just never feels necessary.  At best it is an unnecessary sequel and at worst it is a shameless cash grab.

My other criticism is that the sound levels are all over place.  Whilst there is a need for screams and jump scares in a slasher movie, Halloween Kills would have benefited from tighter sound editing, as there were time when critical dialogue was difficult to hear over the carnage.

If there was sufficient reason developed in the plot for this story to be told, Halloween Kills could have been a fantastic sequel to amazing film.  As it stands, Halloween Kills feels shallow and unnecessary.  There is even another sequel planned, called Halloween Ends.  The story ended in 2018.

Science Fiction: the final frontier. These are the articles of the freelance journalist Peter Ray Allison. His continuing mission: to explore strange new realms of fiction, to seek out new genres and new visions of the future, to boldly geek where no one has geeked before.
More Goodness
FilmHalloweenhorror