previous
Now You See Me - 10 GPPs
random
next
Mexploitation, Round Two- Finally, a trailer for "Machete Kills"!
Film and TV
0 likes

Hammer of the Gods — 4 GPPs

Would you like something to leave on in the background of YOUR D&D campaign? Have a new bong you’d like to try out? Do you enjoy underwhelming combat in psuedo-historical action films? Well, then I’ve got news for YOU!

This film is chock-full of action movie tropes and cliches. The film plays out like a standard early-90s fantasy RPG module with a bit of dubstep. The king is dying and sends the main character on a quest to secure a successor. Everything hangs in the balance blah blah blah.

The story is set in late 9th century Britain during the final days of Viking dominion. The Viking king, Bagsecg (James Cosmo/Joer Mormont), summons his son Steinar. The prince is to find his estranged brother Hakan. He journeys deep into Saxon held lands, finds another adventurer to join the party, and finally kills his brother. 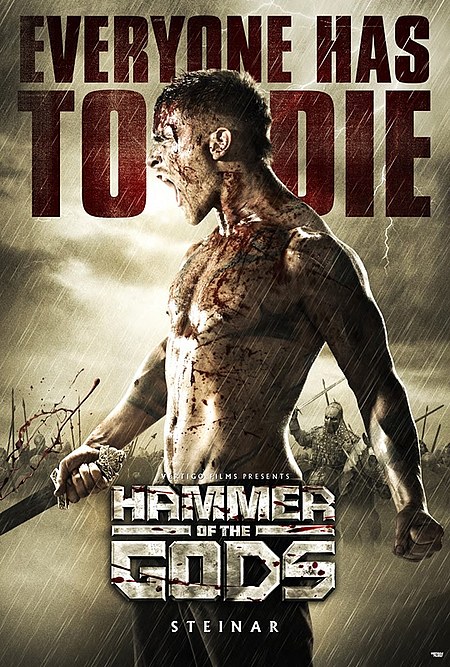 The story is bland but the characters are hilarious (not in a good way). Steinar is supposed to be an atypical Viking because he eschews the superstitious belief in magic and the gods and Jesus. His ‘great strength’ is his cold logic but he does something so stupid that it’s DISCUSSED IN DIALOGUE! His best friend, confidant, and eventual murder victim Hagen (Clive Standen…yes, Rollo from the History Channel show Vikings…and not the only actor from that show), points out that the smartest thing to do is wait for the king to die and then become the successor. Steinar was having none of it.

By the end of the film it became very reminscent of Joseph Conrad’s Beyond Thunderdome. The film badly wanted to convey the gravity of the long lost brother’s madness. Steinar and Hakan/Master Blaster/Brando entered a pit and, you know, one-man-leave. Steinar/Riddick inherited the clan of blue-painted cave-crazies. In fact, everyone but the obligatory damsel and main character died in this movie.

The final scene is Steinar and his new girlfriend/shield-maiden in front of an Viking army. The army was no larger than the one before his quest. It wasn’t clear whether the you-keep-what-you-kill cannibal people joined his forces on the battlefield. The Vikings were also about to attack a vastly superior force of Saxons. How is this new king supposed to be a smart one? (I think Steinar means Stoner.) 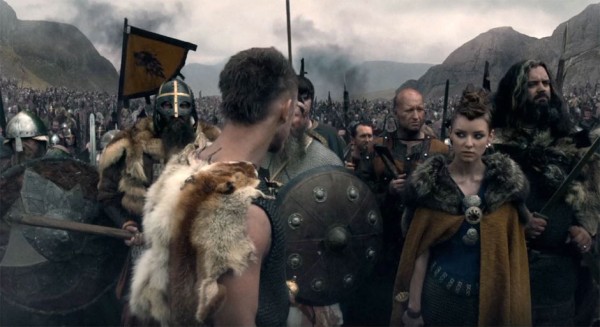 There was one deliciously fantastic ray of glimmering goodness in the film. Without this unbelievably stupendous moment, I don’t know if I would have even bothered to write a review. I need to make something clear. I do not mean this adulation and praise in a sarcastic or ironic manner AT ALL. I really truly mean that this was the best and most memorable part of the film:

Yeah. That’s right. You read it correctly. There’s just a black dude in a cave in 870 A.D. Britain…hangin’ out with cannibals…wearin’ blue body paint…worshipping a Viking cult leader. Nothing was explained. No hints. No suggestions. Just…an unexplained black man. You KNOW that magnificent bastard has a story! Who is he? How did he get there? When are they going to make a sequel so I can rip this gloriously unending Rubik’s cube from my skull!?

Unexplained Black Man is the reason to see Hammer of the Gods. I seriously started sketching out a backstory for that guy. It was so inspiring, so zero-effs-were-given, that I think I may turn it into a short story. I’ll let you know how it goes. The GPP over-inflation was all thanks to him. Cheers!

[NOTE: The year in the trailer is different from the one in the film’s prologue.]