We’ve all been dying to get more news from the set of the long awaited Batman vs. Superman and they finally gave us a photo. It’s not much – and it’s only a picture of Superman’s “cunningly” crafted disguise, Clark Kent – but hey, it gives me hope that more is to follow.

The picture was released via Twitter by The Royal Marines Charitable Trust Fund that Henry Cavill shows support for in the photo. The organization’s purpose is to help Royal Marines, both in active duty and retired, to have a better life quality.

Henry Cavill managed to kill two birds with one stone with this one, both giving us what we so much needed after a bit of a dry spell as far as Batman v Superman is concerned and raising awareness for this charitable organization. 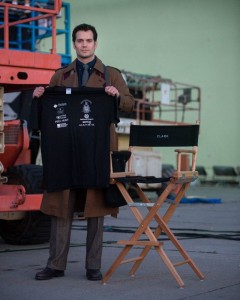 Stay tuned for more, we’ll make sure to bring you fresh news about the movie (that we still have to wait two years for, but who’s counting, right?!).

What's there to say about me? I love the sci-fi and fantasy genre when I read, but I am in no way limited to that alone. I do think Frank Herbert deserves a statue for his writing(if there is one, point me in that direction, please). I enjoy writing quite a lot, but I am also kinda lazy. If you want to make me happy give me books or Doctor Who collectibles. Or a real TARDIS, in which case I will love you forever.
More Goodness
Batman v Superman: Dawn of Justicebatman vs supermanClark Kent