It seems that after the horror of the Clash of the Titans remake and its sequel that there might actually be a good film based on Greek mythology as the first trailer for Hercules, starring Dwayne “The Rock” Johnson as the titular son of Zeus, hit the interwebs. 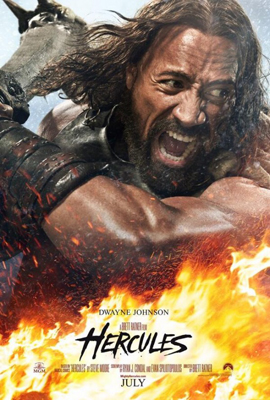 The film is based on the limited series Hercules comic written by the late Steve Moore, illustrated by Admira Wijaya and Cris Bolson published by Radical Comics. Moore’s story downplayed the more mythological aspects associated with the character and was more of a character study of a hardened warrior amidst the war, murder and deception of ancient Greece. It didn’t shy away from the brutality of ancient warfare as Moore, a comics veteran, didn’t want it to be prettified like a fantasy movie as  Hercules is hired by the king of Thrace to train his army. Fans of the comic will pick up the iconic headdress which featured in the comic in the trailer and will also notice that in some spot on casting Dwayne Johnson is Hercules and this could easily become a high profile franchise for the former wrestler.

There could be trouble though as director Brett Ratner was the man behind X-Men Last Stand, which was memorable for the worst of reasons and the screenplay is from relative unknowns Ryan Condal and Evan Spiliotopoulos.

Whether the film sticks to the more gritty and brutal style of its source material or whether it will ironically be a prettified fantasy movie   remains to be seen.

Andy Haigh started writing to counteract the brain atrophying effects of Retail Hell, now it's an addiction. Andy is an unrepentant sequential art absorbist and comics are one of his passions. Other interests include Film, Music, Science Fiction and Horror novels and quality TV like Game of Thrones. He can talk about these at great length if only someone would listen. He lives a somewhat hermit like life in The Shire, spends too much time on social media and is still waiting to go on an adventure.
More Goodness
breakingDwayne JohnsonFilm