A couple of moments of cliche villainy

John Wick is a great action film that sees Keanu Reeves on, pardon the pun, killer form. If only all fight sequences could look this good.

John Wick serves as somewhat of a critique of action films. It is highly likely this is meaning I’m putting on the film, rather than it being intended by the writers, but there are a couple of moments in the film where the notions of civility and basic instincts are raised that, to me, seem to support the theory I shall now unfold. Wick himself consistently follows base instinct, namely revenge, while denying his enemies’ pretenses of being civilised. To look at this as a position of critique, it is arguable that the film is drawing a line between action films that go pure and simple for the action, such as John Wick, and those that make pretenses at deeper plot in some sort of aspiration towards ‘high culture’. That is not to say that action films are inherently incapable of good or complex plotting, rather it is saying that they should not necessarily try to stretch themselves to creating Machiavellian level plotting in order to be something more than they need to be. As much as people go to see romances for the big kiss scene, action films are viewed for the action. John Wick sets an example by keeping it simple. Ex hitman, dog left by dead wife, russian mobsters steal car and kill dog, unleash Keanu. Then allow directors Chad Stahelski and David Leitch, former stunt guys themselves who worked with Keanu on the Matrix, to play to their strengths and focus on creating raw, slick moments of incredible kinetic violence. 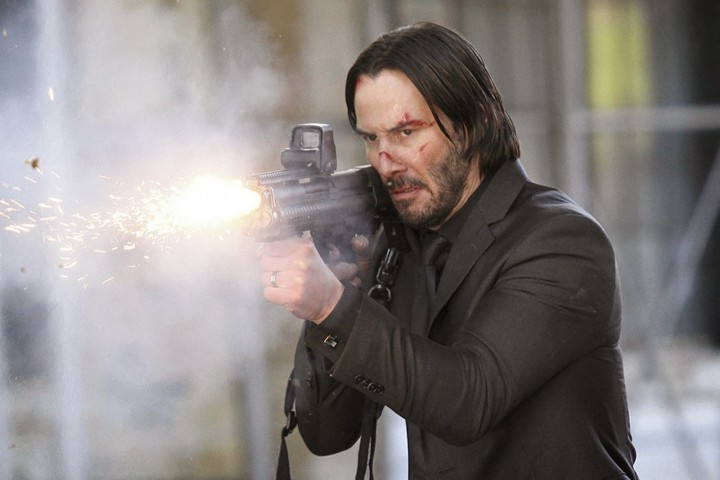 John Wick is not a “dumb” film, that’s a definition I want to make clear when I say that it’s simple. I simply mean that it is a film that knows what its audience wants and, perhaps more importantly, what it is good at. The setup as I described is all that’s really necessary. Particularly as the film is rather ingenious in letting plenty of moments of minute plot slip in that tease at a far greater universe that exists in the world of John Wick. You may not necessarily notice it amidst all the glorious Keanu action, particularly when he looks so damn good in that all black suit, but there are a lot of little details that are left, for the most part, unexplained. The world these various assassins live in, particularly as related to the seemingly exclusively hitman occupied hotel The Continental, is extensively teased but never fully realised because, ultimately, it is not necessary to the central narrative line. That doesn’t mean that it’s not fascinating however and I couldn’t help but think how well John Wick would operate as a comic book universe. Maybe, with the sequel/sequels supposedly lined up, we may get to see that dark universe more fully realised.

Regardless of franchise potential though, it’s hard not to love a film that looks this good. With Stahelski and Leitch’s prior stunt experience, aided by the fact that they’ve previously worked with Keanu, it would be hard to imagine John Wick working as anything less than a solid action outing but the pair really go all out and deliver fight scenes that are superbly choreographed with the right amount of reality and violence to really make you feel the fights, all the while not shying away from the fact that in the character of Wick, Keanu Reeves is somewhat mythic. A couple of moments in the fights really stood out for me but on very opposite ends of the spectrum. The first sees Reeves break a guy’s neck by slamming him onto a table and then chopping down so that the neck bends over the table’s edge, snapping in a seriously brutal fashion. On the lighter side of the spectrum however, there is a rather wonderful moment that sees Keanu having to reload mid one-on-one before he headshots the guy. You’ll have to see it to really appreciate the moment, but it is a wonderfully light touch of comedy to see the hitman so terrifyingly skilled that he is nicknamed the Boogeyman having to reload mid-fight with a look of mild irritation at nothing more than the inconvenience. And speaking of reloading, it is something that actually happens reasonably often, a point that may seem unimportant but is great to see. Far too many action films seem to equip their heroes with guns that just have never-ending bullets, seeing Wick burning through ammunition forces him to change up the fights and keeps you grounded in a way that stops the film ever entirely overplaying its hand on the mythic level of Wick’s skill.

Really, the only issue I can take with the film is that there are a couple of moments of cliche villainy when you’d expect the bad guy to just kill Wick but instead take the opportunity to monologue, obviously giving Wick the change to escape. And while these moments are somewhat trite, seeing as they inevitably lead into more of the great action scenes that really define this film, they’re not too hard to forgive. The potential of sequels is also something mildly concerning in that they could so easily fall into cash-in territory, particularly given the film’s nicely wrapped up ending, but, provided they stick to the tenets of the first film and don’t overplay their hand, there’s no reason that more outings into the universe of John Wick can’t be just as superbly violent and entertaining as this one.