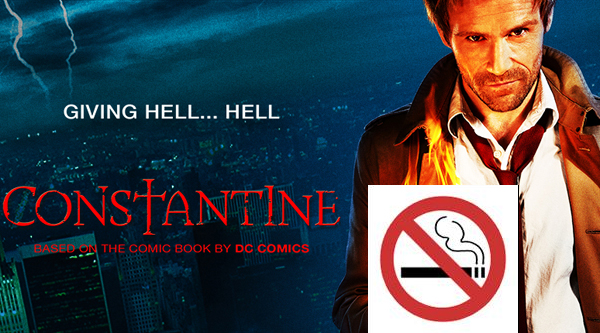 In a recent interview Neil Marshall, director of The Descent and several episodes of Game Of Thrones, amongst other things, revealed an important detail about the upcoming pilot for NBC’s Constantine – due to network policy John Constantine will be kicking his chain smoking.

For people not familiar with the character or Hellblazer, the character’s former home, this might not seem like a big deal, but Constantine’s chain smoking is a key character trait. His habit served as the core of one of the most acclaimed arcs to feature in Hellblazer, Garth Ennis’ Dangerous Habits. Constantine’s smoking also served two other functions as well, it indicated his blue collar origins, as smoking has generally been associated with the British working class, but it also serves as a visual metaphor for Constantine’s other addiction – magic.

The habit is so synonymous with the character that it’s hard to find a piece of Hellblazer art that doesn’t feature Constantine either behind a fog of smoke, with a smouldering Silk Cut in his hand or hanging from his mouth. Even Francis Lawrence’s film kept his chain smoking despite changing other details about the character and the world he inhabits.

Exactly how this will affect the show remains to be seen, but it seems like a big, if somewhat predictable, stumble for a show that has  done a lot of stuff right to convince fans that actually they were paying attention to the source material. much to a lot of people’s surprise.