The Percy Jackson series of books by Rick Riordan has a simple premise; introduce a boy into a world of Greek myths and legends, but set it in modern-day America, and have a little fun with it. The books manage this really well, taking some artistic license with the stories of gods and monsters, and adding a decent teenage commentary to add the real-world spin, and also inject a little humour.

2010’s Percy Jackson and the Lightning Thief provided a solid start to what could become a good movie franchise, with some interesting twists on gorgons, centaurs and sirens, as well as the amusing aging rocker Hades. The movie was fairly faithful to the book, and I was looking forward to how the series continued.

Now we have the follow up, Percy Jackson: Sea of Monsters – furthering the adventures of the teen demi-god and his trusty compatriots, and I was quietly looking forward to what would unfold. Unfortunately I was doomed to be massively disappointed. I’ll try and keep things as spoiler-free as I can, but there are some things I’ll be ranting about which may have the need to include them – I’ll give you fair warning though. 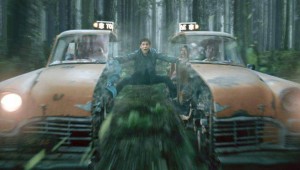 Pick a side, Percy!

Sea of Monsters continues son of Poseidon Percy’s story directly from where the first movie ended, set about 9-10 months after Hermes’ son Luke (Jake Abel) was defeated, and the lightning bolt returned to Zeus. Percy (Logan Lerman) is living in Camp Half Blood, touted as the only safe place on Earth for demi gods due to it’s protective barrier, where he trains with his friends in battle simulation prettymuch day and night.

An attack on the camp instigated by Luke causes the barrier around it to disintigrate, and it’s deemed that only the golden fleece can be used to repair it by healing a poisoned tree (the tree is a fallen demi god who was transformed by Zeus, creating the barrier to protect the residents of the camp from harm).

The quest to retrieve the fleece is assigned to the snobby, bitchy and arrogant daughter of Ares, Clarisse (Leven Rambin), who is largely considered the best warrior of camp half blood, and she certainly knows it. Fortunately for Percy, he seems to be involved in the quest regardless thanks to a prophecy which mentions him as either the saviour or destroyer of Olympus.

Prior to Percy’s departure he’s introduced to Tyson (Douglas Smith), a Cyclops who is also the son of Poseidon, and he accompanies Percy on the quest, along with his usual companions; Athena’s daughter Annabeth (Alexandra Daddario) and Satyr Grover (Brandon T. Jackson).

The visual effects of the film are actually pretty decent, with some excellent work done on the Colchis Bull – I love the steampunky feel to it, and it’s actually pretty badass – and the creature effects and designs are all really intricate and interesting to look at. The effects are unfortunately heavily relied upon, with there being little other substance to the movie.

The main plot of the movie is fairly straightforward, and there’s very little variation and/or twists to take into account – this seems to give the impresion that the plot progression throughout the film is just a filler from one action scene to the next. What’s also disappointing is that there’s next to no character development or progression either – the only dynamic that seems to have been utilised is Tyson, and the reactions to is “Ocular Impairment”.

Welcome additions to the cast are Stanley Tucci who appears as “Mr. D” aka the god Dionysus, and Buffy’s Anthony Stewart Head, who replaces Pierce Brosnan as the Centaur Chiron. Another Whedonite to join the movie is the always exemplary Nathan Fillion who plays Luke’s father Hermes. Fillion’s involvement is one of the few redeeming assets of the movie, in particular one quip about cancelling the best tv series ever in which he could prettymuch have been staring directly into the camera, calling Fox a bunch of bastards. Unfortunately Hermes’ appearance is cut way too short, and as a result we’re left yearning for more of our beloved Cap’n Mal.

The soundtrack for the movie isn’t bad, but isn’t anything special – it does the job, and builds tension in all the right places.

Now I’m afraid I’ll be having a little bit of a rant, so if you don’t want anything spoiled, then skip to the last couple of paragraphs for my final thoughts. However if you’ve read the book, and want to know why I’m pissed off, then you may want to keep on reading.

Right, so let’s get straight to it. Screenwriter Marc Guggenheim has screwed the source material completely while adapting Sea of Monsters for the screen (but then he did write the screenplay for Green Lantern). Just a quick one… why change the title? It should be “Percy Jackson and the Sea of Monsters”… what’s wrong with that? Ok… that’s just a pet peeve of mine, so can be forgiven. The rest… can’t be at all.

To start with, in Riordan’s novel Percy doesn’t live at Camp Half Blood – he only spends the summer there… in between he goes to school, and it’s in school that he meets Tyson where they’re best friends – he also finds out about Tyson’s mythalogical status there too as he’s involved in a fight with three giants, and Percy is saved by him. The “mist” that clouds his single eye and makes him look normal is a natual occurrence, rather than applied using a perfume bottle, and its not until Percy really looks at him closely that he can see he’s a Cyclops. 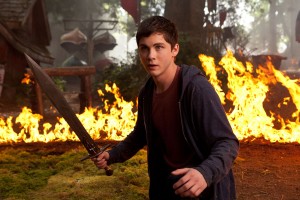 Percy gets ready for a fight

Secondly, there’s an underlying storyline with Grover and his search for the god Pan… He’s not even in the book (aside from in Percy’s dreams)  until about third of the way through when he’s rescued by Percy from Polyphemus.

I could go on and on about inconsistencies and things that have been changed (for example there were 3 Colchis Bulls in the book, along with a flock of metal birds that attack Camp Half Blood, a permanent grudge between Percy and Ares resulting in spectacular fights etc etc) , but if I just sat here listing everything that was different or wrong, then you’d prettymuch only be reading a tirade of abuse. Lets just say that if you expected the screenplay to mirror the novels as much as the Harry Potter films mirror theirs, then you’ll be left wanting… much to the film’s detriment.

What makes me angry about it is that if these facets were included and unchanged, it would make the story in general much more substantial and entertaining. As it is, the movie doesn’t stand up to scrutiny on it’s own because of these adjustments… and if it means because of this that the other books don’t get adapted, it’ll be a real shame. Just to hammer this home a little bit – there would be more of Nathan Fillion if the source material was stuck to… MORE FILLION I TELL YOU!

Anyway, I won’t tear it apart any more… Sea of Monsters manages to do this all on it’s own, right down to the lacklustre ending with the reveal of the big bad guy (who incidentally looks like he’s been ripped directly from a videogame like God of War), and the incredibly quick and easy method in which he’s dispatched. 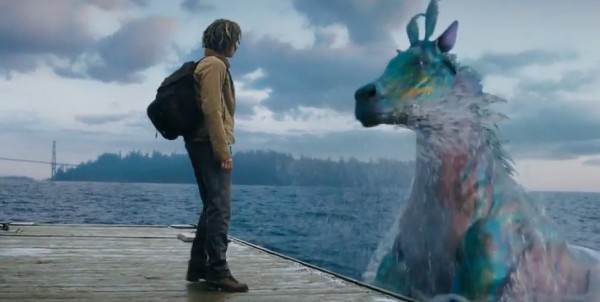 In the books, Tyson calls the Hippocampus (and Chiron) “Pony!”

Overall Percy Jackson: Sea of Monsters disappoints from the getgo, with a thin plot and disjointed story arc that just runs from one effects-laden action setpiece to another. You’ll enjoy the battles, but you’ll leave the theater feeling like there’s no payoff at the end of it. Judging by early reactions, it’s potentially putting the series in jepoardy… so as to whether there’ll be a sequel to adapt Percy Jackson and the Titan’s Curse or the other books remains to be seen.

If you haven’t read the novels, there’s a chance you may enjoy the film… but if you’ve read them, you are going to be incredibly irritated. If you have yet to read the books, then don’t let this film put you off – they’re great fun and well worth putting in the time to read through.

Movie and videogame geek, basketball player, guitarist, waffle connoisseur & expert in being a slacking bastard. You'll find me gaming on PS4 as "SpasmicPuppy" most of the time... I'm addicted to Destiny.
More Goodness
adventurebreakingFilm