Some decent jokes, and Mary-Louise Parker was quite funny.

Almost all of the film.

For me, RIPD is not a good film. It did have a few funny moments, but the tired Cop Movie plot grafted onto a Supernatural idea did not work. 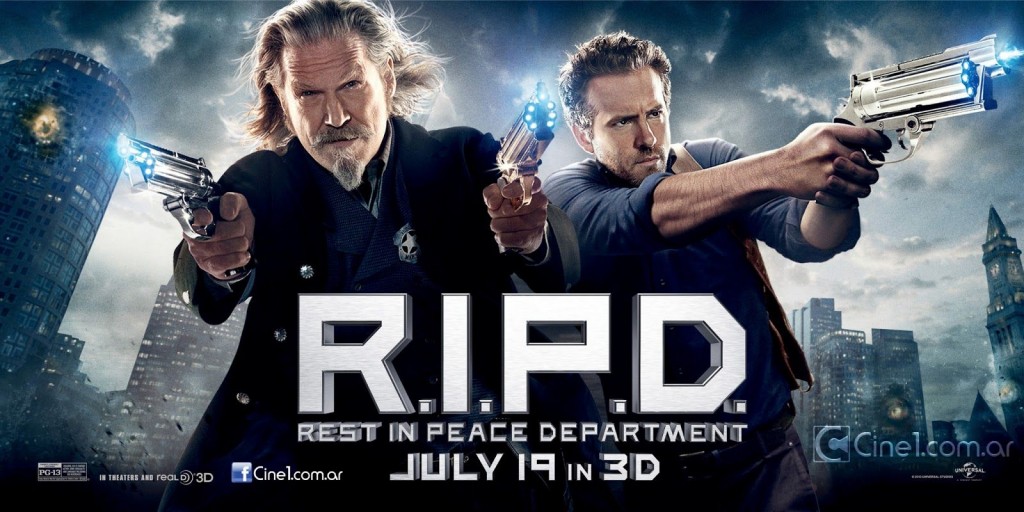 I shall preface this review by saying that I have not read the RIPD comic, so I do not know how badly mangled or faithfully represented the storyline is. If it is faithful, then I will not be reading the RIPD comic.

I don’t like to be negative about films (aside from The Dark Knight Rises and X-Men: The Last Stand). Films require a lot of work. People spend days, even weeks, trying to pull them together. They sweat, they toil, on making the effects sharp and the sound perfect. RIPD is broadly well-shot, its effects are reasonable and its editing is good.

The problems, for me, came from the script, story and acting performances.

Ryan Reynolds plays Ryan Reynolds, a Boston cop who has just taken a bribe at the behest of his partner, Hayes (played by Kevin Bacon, who seems to have realised he wasn’t in a great film and gives a performance almost identical to the EE adverts). Desperate for money to pay for… something for this French wife, who says ‘all I need is you’ because she *just* is so adorably free and endearing, he has taken gold from a drug cartel, which he buries.

The next day, Ryan’s conscience gets to him and he tells his partner he won’t take any more bribes. Hayes is annoyed but quickly takes Ryan’s point, saying it was getting on his conscience too, that he won’t take any more either. Three seconds later, they are coincidentally called out on a major bust which requires half the Boston P.D. to take down another drug ring.

During the shoot-out, Hayes surprises no-one by shooting Ryan and killing him. A cool moment follows, with everything frozen as Ryan leave the building and ascends to Heaven and Judgement. This was really well done, and I liked it.

Then, fate kicks in and Ryan is pulled away at the last moment to join RIPD. They give him the chance of getting into Heaven if he spends a century returning souls which escape Hell. For some stupid reason, they think it brilliant to plonk him back down in Boston, where all his unresolved feelings for his wife and his killer remain. They also give him a partner, a tough Wild West era Lawman who doesn’t play by the rules and is a loner and EVERY OTHER DAMN COP CLICHE IN THE BOOK. This man is also Jeff Bridges, though he calls himself Roy to protect his identity.

Roy takes Reynolds down to his own funeral, for ‘closure’. Of course, Reynolds goes up to his wife to say his still exists, but neither she nor Hayes recognise him because he now looks like an old Chinese man, something RIPD do to protect the living from the dead and also to help on ‘stake-outs’. Roy looks like a beautiful woman who has forgotten how to wear clothes, because the idea that an attractive female could be capable is so funny. Reynolds is obviously upset, not by the sexism but because not only has he seen himself buried but he saw his wife and his killer. If only there had been some way of preventing that…

Anyway, afterwards, they go out on a bust, which just so happens to be related to the gold Ryan was burying in the first few seconds of the film. Roy and Proctor will not believe that there is a connection though, particularly as the two RIPD cops completely botch the bust and barely catch their criminal. Reynolds though, who seems to know how ridiculous all of this is, will not let that plot thread die and so convinces Roy to continue the search.

They go to Roy’s informant, a soul he allows to remain in Boston because the plot needed somewhere to go (Seriously, souls in the RIPD universe rot and destroy everything around them, getting worse the longer they remain. Quite why this would be acceptable is beyond me). They interrogate this Red Sox fan, but he says he knows nothing. Reynolds gives him a piece of the gold he stole and asks him to find out more.

Luckily, though, every dead thing in Boston is in on the BIG PLAN, so the informant is able to contact someone to sell the gold to. And it’s HAYES! Would you believe it?! I certainly did. Reynolds and Roy follow Hayes as he then passes the gold onto another dead soul, this one made up like Ginger Elvis. They assume that this is a sale, despite the fact that no money exchanges hands, and continue to follow Ginger Elvis.

They trap GE in a fridge and interrogate him using Curry which, somehow, reveals the undead. GE decides this is all a bit silly and huffs a great handful of the stuff, before beating Roy and Reynolds up and leading them on a chase across the city. This action sequence is really well done, and a little amusing in places. However, GE gets away, leaving the gold behind.

Roy and Reynolds then get into big trouble because apparently no dead soul has EVER done this before, and this has now revealed the existence of the dead to the world. Despite how powerful these souls are, and the fact that they know they face erasure or a return to Hell if caught, no-one has ever decided to try and use their true form and its near-invulnerability to escape the RIPD before. They’ve never carried around sealed Curry powder for when they were cornered, apparently all having the IQ of walnuts. It’s amazing that these two aren’t congratulated for facing the first intelligent dead soul. But, instead, they are told exactly what the gold is all for and then summarily removed from the case and told they will be erased themselves the next day.

Now, you could argue that those who run the RIPD, implied to be from Heaven, knew what would happen next and did this to encourage it. But I find the ‘off the case, but continue with the case anyway’ schtick to be so terribly overdone. It angered me. A lot. I realise they were going for a tongue-in-cheek piss take of Police films, but that has been done so many times that I find such an aim in itself is a cliche! RIPD, I feel, has and had nothing new to add to the formula, just tried to tip us a wry wink as it did what everyone else has done ever.

Anyway, being off the case obviously is sad for a while. Roy and Reynolds argue, then make up, and they decide to continue after the case when Reynolds realises that Hayes might be undead too, because he’s after the gold which will return all the undead from Hell and Heaven and end the world. Roy just casually mentions, for the first time, that the dead can hide their destructive presence using artifacts. And Hayes wears a bracelet which the film made a big deal about. SO HE’S DEAD TOO!

They capture Hayes, allowing us a brief, enjoyable moment when the artifact is removed from Hayes and his pent-up evil destroys his home, and bring him in for arrest and questioning. Hayes taunts both as he is taken in, and neither questions why he’s so happy to be captured and face returning to Hell. Because plot.

Hayes and a few of his cronies are placed together and then they take down every RIPD officer using a substance that apparently is quite common but the RIPD officers never thought to check for. It’s even hidden inside one of the souls, making this a rip-off Joker Gambit. He then steals pieces of the artifact kept in RIPD’s vaults and escapes, because Act 2 needs to end on a down note in the Standard Script Formula.

Act 3 consists of running to stop the end of the world. Quite generic stuff. Hayes captures and kills Reynolds’ wife because plot, and then is defeated. The amazing artifact which will end the world is taken down with the help of a conveniently located bus (which, again, you could argue that Heaven put there but a story should never rely on Deus Ex Machina). The good guys win, the bad guys lose, Roy and Proctor get back together and everything is as it should be at the end of a cliched and formulaic film.

For me, RIPD is not a good film. It did have a few funny moments, but the tired Cop Movie plot grafted onto a Supernatural idea did not work. If you have the ability to switch your mind off, and want to try this ability out beyond the confines of a menial job, then RIPD is the film for you. Otherwise, I’d recommend not paying for it, and only watching it on a dare or if no other entertainment is available.

Sean is an editor, writer, and podcast host at Geek Pride, as well as a novelist. His self-published works can be found at all good eBook stores.
More Goodness
Jeff Bridgesmoviereview

R.I.P.D Is MIB With Zombies