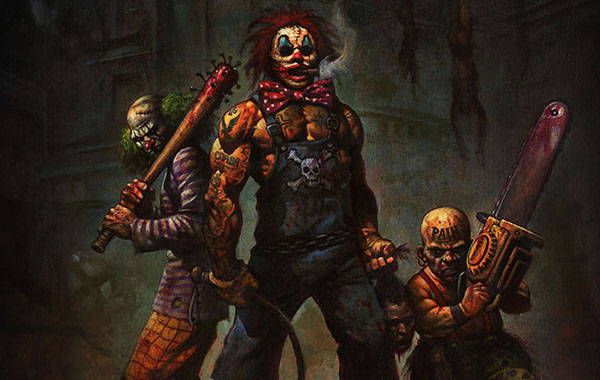 Rob Zombie, writer and director of cult Grindhouse inspired films House of 1,000 Corpses and The Devil’s Rejects as well as The Lords of Salem and his own take on John Carpenter’s Halloween, has his next film lined up and is turning to crowd-funding to help finance it.

I’m crowd-funding because I realize that it’s an incredible opportunity to engage the fans. They’ve always been the most important thing for me because, with metal and horror, the fans aren’t just fans – it’s their life, their lifestyle. They live and breathe it, as I do, and any way that you can bring the people that are as passionate about it as you are into the process is a win-win for everybody.Get on board! Get involved! Be part of this horrifying business! The world of horror needs you!

Researching Halloween, Zombie discovered that more people go missing on this day than any other inspired by this the film maker came up with the idea for “31”. The film is the story of five strangers kidnapped in the five days leading up to Halloween. The group find themselves having to fight for their survival in a nightmarish place called Murder World. They are forced to play a twisted game named 31 where they have to face and kill their opponents a group of clowns known as “The Heads” within 12 hours in order to gain their freedom.

The film maker and musician is offering backer rewards inspired by requests he’s had from fans at shows with rewards ranging from the standard affair of DVD’s and t-shirts to props from his films House of 1,000 Corpses and Halloween, concept art by Zombie himself, the chance to be an extra in the film and more. One reward a pair of lifetime laminates, limited to 20, allowing fans to see Zombie live on tour free forever wherever has already sold out despite the price tag of $1,000.

For more info on rewards and other details check out RZ31.com

Andy Haigh started writing to counteract the brain atrophying effects of Retail Hell, now it's an addiction. Andy is an unrepentant sequential art absorbist and comics are one of his passions. Other interests include Film, Music, Science Fiction and Horror novels and quality TV like Game of Thrones. He can talk about these at great length if only someone would listen. He lives a somewhat hermit like life in The Shire, spends too much time on social media and is still waiting to go on an adventure.
More Goodness
Crowdfundinggrindhousehorror