SPOILER ALERT go no further if you don’t want it ruined for you.

You have two options here… Listen to the audio below… or read it; up to you!

So as the title of this piece implies, I kinda liked Rogue One, a lot, like to the point where I have even  toppled my favourite Star Wars film of all time (The Empire Strikes Back)  and replaced it with said Rogue One; conferring it simultaneously with the accolade of BEST STAR WARS FILM EVER!

Now I will let you nerds take that in… Finished raging yet? ok I’ll give you some more time.  A lot of keyboards and phone screens being furiously tapped away at this moment in time.

Maybe if I give you my list of the Star Wars films so far; does that help?

Blas for me, Blas for you, Blas for everybody in the room no doubt; I best explain myself.

First off, let me caveat the above by saying I love Star Wars, always have done, from going to watch them with my dad when I was but a nipper, to growing up with the new incarnations and beyond.

Ok it has been a bumpy ride and at times the prequels have been widely lambasted by a lot of my peers, but as much as certain characters, Jar Jar Binks and Young Anakin, are possibly the most annoying creations ever, I still enjoyed the films; with some of the lightsaber battles being the best in the franchise and Darth Maul being one of the coolest bad guys. 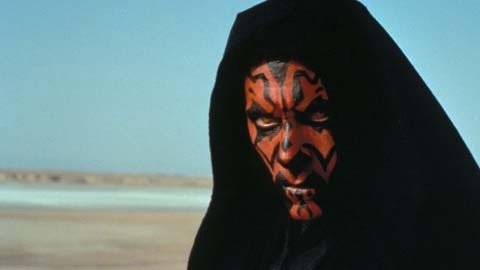 This being said, the prequels had a lot wrong with them: an over reliance on CGI, plot holes, contradiction of story ark… mediclorians ?! and so despite not hating them, I didn’t love them either.

They filled a hole though and I still have fond memories of going to see them with my family and friends. In fact I can remember specifically who I was with and where I was for each movie; so despite their lower status they aren’t, in my mind forgettable moments in my life.

But ‘Better than Empire’ and A Force Awakens at number 5 on the list… explain? 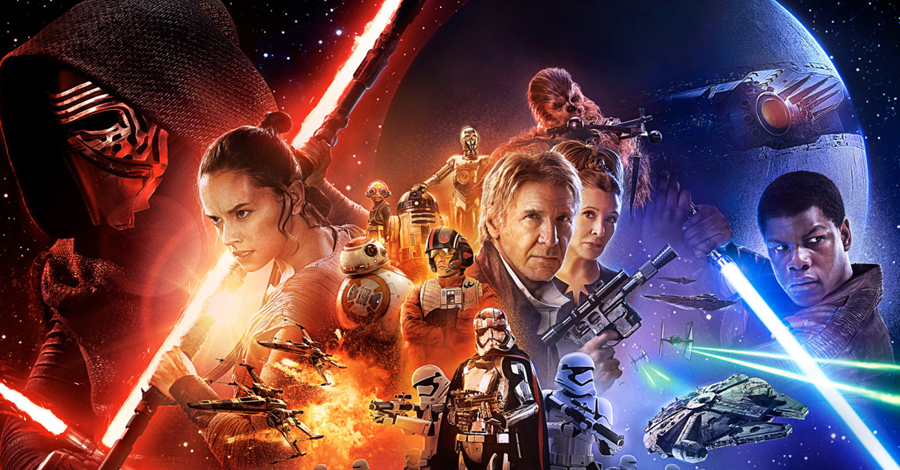 Don’t get me wrong, it was a hard decision to make and I did love AFA , as it brought us back to the nostalgic feel of the original films, but the issue is I preferred the older trilogy and feel that as much as AFA has brought us back to a golden age, it is, at its heart, just a retelling of a New Hope. Replete with our beloved heroes, 32 years on; robot chasing, death sphere, trench fight, Old wise man, and farm boy/girl looking for answers / enlightenment and their parents.

Therefore, I had no option but to place it behind a New Hope.

As for The Empire Strikes back well you have to understand how much I loved / still love that film, it was my all-time favourite Sci-Fi movie for a long time, and still was until last year; incorporating everything I love about a good war film: epic battles, fights against the odds and a dash of humour and tragedy.

When someone talked to me about Star Wars, TESB was the first film I thought of and when I played with the toys as a kid, it was always my AT-AT vs my brothers Snow speeder. There was no competition and continued to have no competition until last year; to the point that I bid on a Hoth Diorama, at a charity auction, (Dinner with the Stars ) for a pretty penny and got it signed by Brian Johnson; this artefact now resides pride of place in my man cave. 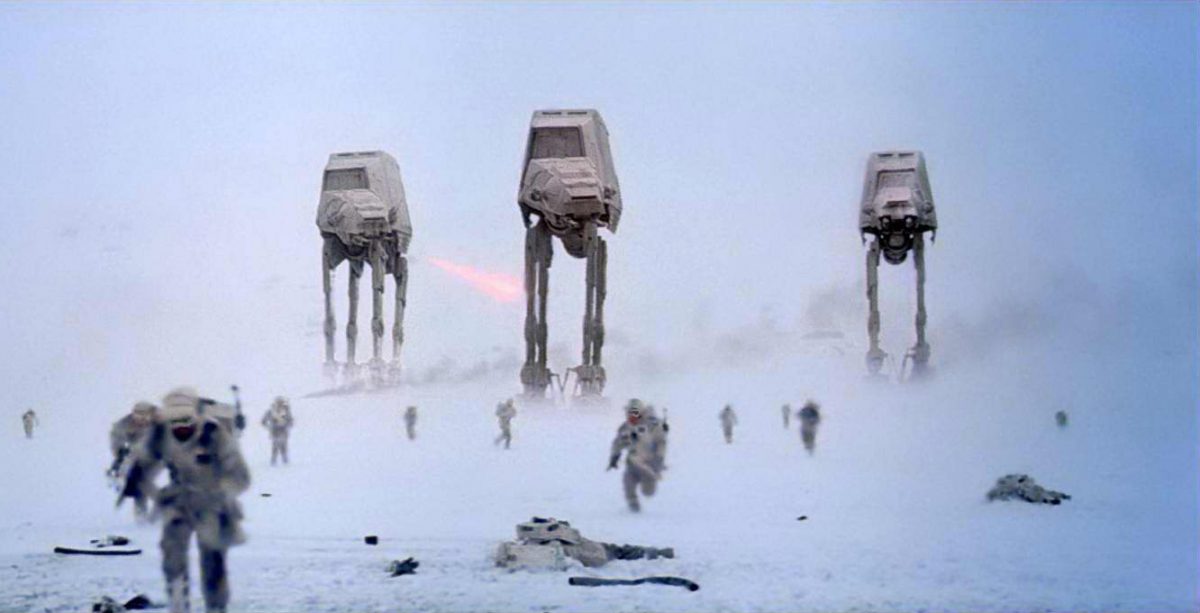 What about Rogue one?

Well I will admit that Rogue One, when it was announced did not overly ping my radar. In my mind it was just filler, something to keep us sweet while we waited for episode 8 and so not overly worth a lot of thought.

Sure I’ll go and watch it and I’m sure it will be ok / good buuuuut I can’t see it being any more than its intent, a pre show for next full Star Wars… man was I wrong; 3 screenings later and It still blows me away.

Rogue One is, at its heart, a war film, akin to the Dirty Dozen, The Devils Brigade ,  A Bridge too far or even Kelly’s Heroes. It’s about an inferior and fractious rag tag outfit taking on the might of an overwhelming force with little or no chance of success.

Not a major change from the other Star Wars films you may say BUT, where Rogue One differs, nay, diverges from it’s predecessors is its lack of Jedi / minimal use of force powers and its more adult, darker, and even morally grey direction.

No longer is it Black and White, Light vs Dark, Good Vs Evil but a morass of moral ambiguity that for some may be slightly uncomfortable.

Sure the Empire is still the Empire and it has done, and will do horrible things in the name of galactic conquest and stability but the Rebels are shown, for the first time, as not being as white as white either.

Crimes are committed, murders / assassinations carried out, hard moral choices made and it is very apparent that the only thing keeping them from succumbing to the guilt of their actions is the hate they have for the Empire and the zealous verve they have for their cause.

Added to this darker edge was a sense that the characters in this film were not going to make it; they aren’t in any of the other films and so it only stands to reason that they will be popped off but I personally felt slightly nervous when watching; with a sense of impending doom hanging over my emotions as each minute ticked on.

On top of this the shear amount of lip service to the holy trilogy was just nerdvana Including, in no particular order:

All in all, everything I wanted in a Starwars film was there:

Obviously, a lot of people don’t agree with me, maybe some of you who are reading this now but it seems to me that the current arguments towards Rogue One are rather pernickety and not something I can overly accept.

Now don’t get me wrong the CGI isn’t perfect (though it is rather impressive), the Acting isn’t Oscar winning, the plot does have holes and the characters could have done with a bit more development BUT, and this is my issue, compare it to the other films, in particular the holy trilogy, and clear your mind of nostalgic bias…. was it any different? Yes it was Matt. no it wasn’t angry Geek. Search your feelings; you know it to be true.

It is my humble opinion that the human condition, especially in us geeks, is one that tends to fixate on nostalgia, memories of the past and things that we grew up with; defending them with vigour, zeal and loyalty and vigorously seeing off anything that may usurp them; even if this means contradiction and selective memory… think Member Berries in South Park. 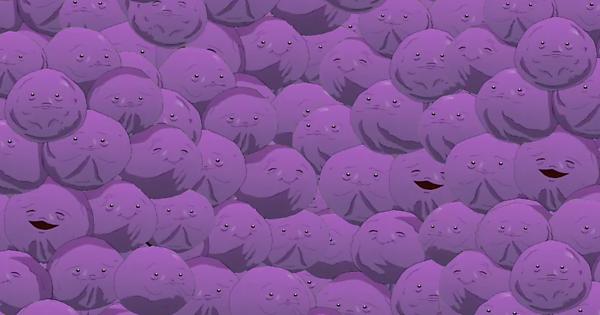 This is the very reason I think people wont say Rogue One is the best Star Wars film, and why some might even have it trailing down at the bottom of the table with the rest of the prequels….Steve.

They are adults now and their brains are more critical, more analytical more mistrusting.  As a kid you watched the original Star Wars films with awe, there was no subtext, there was no care about acting, graphics / effects, or the fact a bunch of teddy bears just destroyed an entire legion of Storm troopers, it was just the story and getting caught up in it and the thought that maybe, just maybe you could be a fighter pilot or a jedi or even Darth Vader.

Many moons ago, while at Uni I used to teach kids computers at a summer scheme in Belfast; ages between 4 and 13.

Now this was in and around the time the prequel Starwars films were coming out and so, unsurprisingly, when we got any down time, the conversation and the games we played, generally revolved around them.

Now, having grown up with the older films, I was interested in what they thought of them compared to the new ones but I was surprised to note that many hadn’t even seen the originals and the ones who had didn’t rate them, being more interested in the ‘Rodger Rodger’ robots, Darth Maul and the big CGI battles.

In their mind, they were presented with a childish spectacle and they chose what any kid would chose in their place. The one with the most things exploding and the most elaborate fights. If you were to stand the old trilogy up against some of the new films and ask kids which ones they preferred I’m pretty confident the latter would win out a lot of the time.

Now in one of our podcast the above argument did not hold water with some of my colleagues, the counter argument being that as more intelligent types we can differentiate between childish nostalgia and reality. Casting aside childish things for a more sophisticated view on what these films are really like.

Now granted, I can say there are things I grew up watching, playing, liking that I don’t anymore but equally there are also a lot of things that I will always like, nay, prefer despite being inferior compared to today’s counterparts; why? Because that’s how we are programmed.

And I’m not saying there is anything wrong with that, nostalgia is very important and it feels good to harken back to days past and how things used to be better.. member.. member. But rubbishing a film, and or set of films, just so it fits in with you views on pop culture and the current click, just seems counterproductive to me.. you may think Empire, or Jedi, or if you are younger, even Revenge is better than Rogue One, but that doesn’t make it a bad film, and all being said and done, balancing everything up fairly and equally, for the time being, I can honestly say to you that Rogue One is my favourite Star wars film and therefore, Better than Empire.

I am sure after that assault on you childhood that may will disagree, so if you do, or if you agree, let us know in the comments below and as always, play nice, no one likes ‘that guy’

I am one with the force, the force is with me….