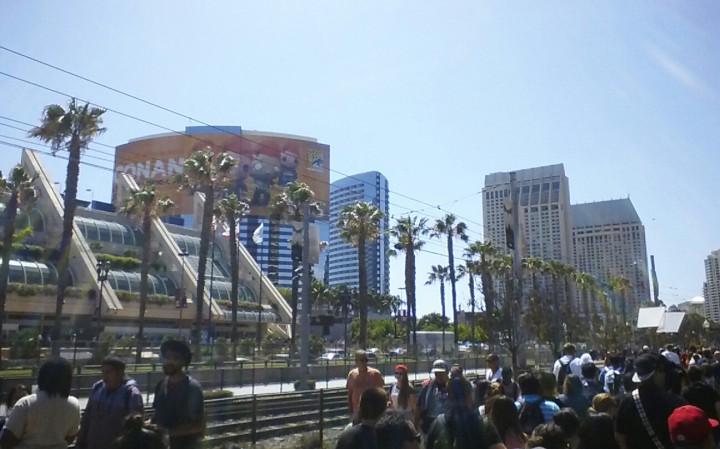 Whilst backpacking across California for a month, I happened upon San Diego during the comic con. I had no badge for any of the days, and didn’t enter the convention center ONCE.

So what did I do? What can you do besides peer through the window longingly like Tiny Tim outside at Christmas? Well I’ll tell ya!

WANDER OUTSIDE THE CONVENTION CENTER – LIKE A LOST PUPPY 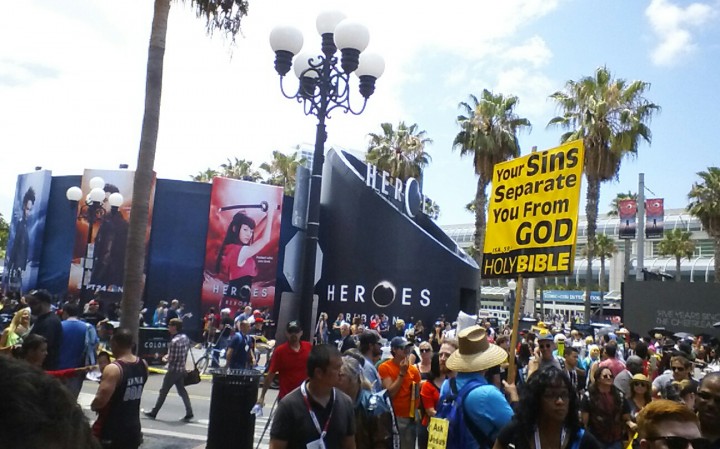 While you won’t find any stalls selling merchandise outside, there’s still plenty of promotional set ups about you can visit! Heroes Reborn, Adult Swim, Assassin’s Creed, FX, Lego Dimensions, Walking Dead, all had interactive experiences and and what not plastered around and between the Convention Center and the Gaslamp District. All free, no badge required! 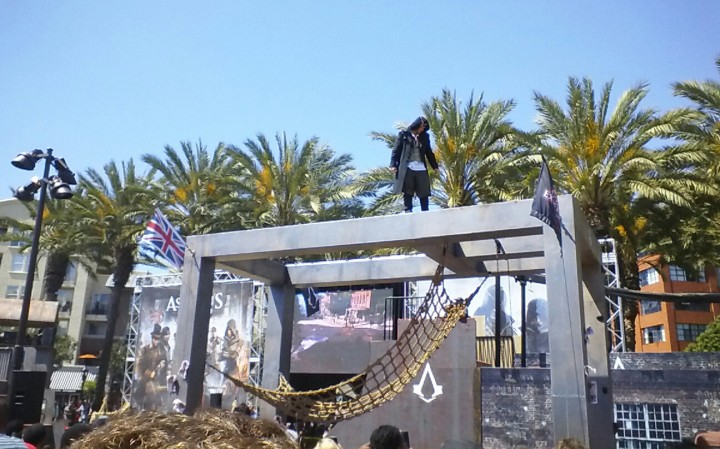 They also put on parkour shows!

Lots of free promo swag, X-men promo posters, free ice cream, Christians and Satanists having a non violent turf war with picket signs, and even some free fair ground attraction rides. You might be queuing up for a while for some of the bigger attractions, but it’s Comic Con, and you don’t exactly have a panel to be at, Mr or Mrs ‘I Don’t Have A Badge What Do Argh’! 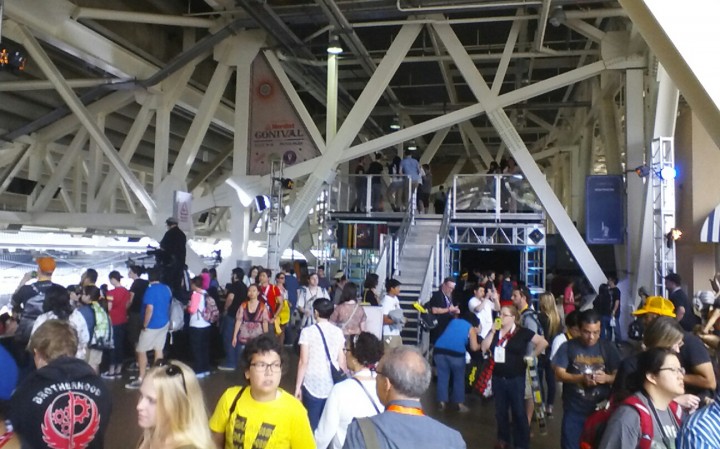 Probably my favourite free attraction was the Conival. Very family friendly with laser tag and the joust puffy thing that’s basically that 1v1 knock the other guy off thing from Gladiators.

But they have panels! From Nathan Fillion and Alan Tudyk to David Hasselhoff, Rick and Morty to the cast of Orphan Black. 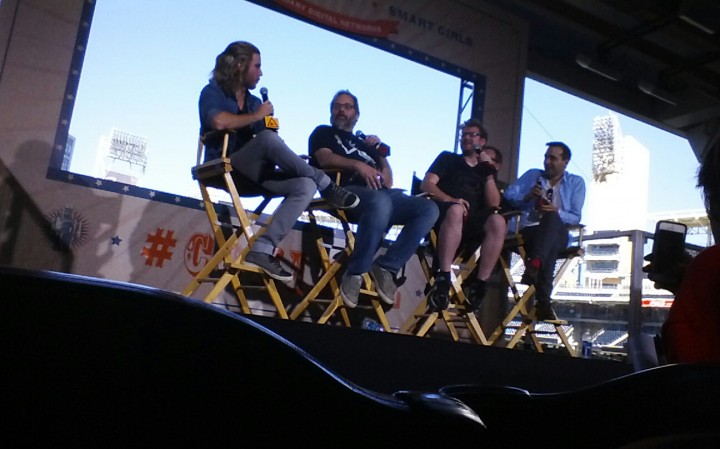 Rick and Morty panel! I was pretty much within burping distance. 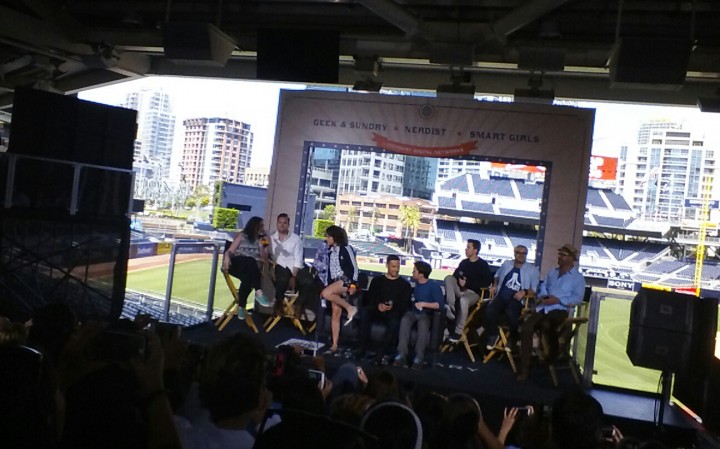 I was really surprised, especially since it involved no queuing whatsoever. Of course it’ll never have Game of Thrones or Star Wars making an appearance, but I managed to grab a tasty burrito, sit down and awkwardly ask Felicia Day a question at her Q&A! Hidden in the bowls of Petco Park, it was definitely worth a visit, plus I got some free t shirts and posters!

Here’s some real advice, behind the Hard Rock Hotel next to Petco Park is where a LOT of celebrities can be seen entering and leaving the hotel. Some will hurry inside while others might stick around. I seen Clark Gregg and some of the Flash and AoS actors taking pictures with fans before retreating inside! Look out for the black cars sneaking famous people in and out of the busy area. You didn’t hear this though… its a secret shhh…

Do you like Star Wars Battlefront? Do you want to try the new one for hours with very little queueing? Then yayyyy Nerd HQ! If you go in the daytime and have no tickets to the exclusive ‘Conversations with…’ panels, then, well, you’ll only really be able to play lots of Battlefront. But Battlefront is fun! Yay Battlefront! Battlefront. Yeah. Woo!

The Nerd HQ party (21+) however was AWESOME! Really really fun dance party at the night time if you want to end up somewhere after a booze up in the Gaslamp District. 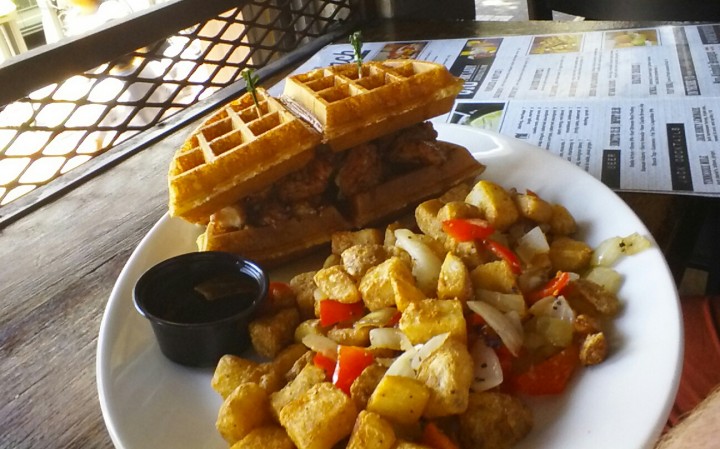 As an Englishman this both disgusts and excites me.

Great place to eat out in during the daytime! Get food, sit out and people watch, because the amount of cosplay about is like nothing you’ve seen before! But it is also really fun for a good drink. My highlight? The Dragon ball Z party at Whiskey Girl. Free cocktails, voice actors from the show giving out free swag and shouting at the crowd in character to drink more, with awesome DBZ cosplayers around to get pictures with! There was also opportunities to get access to an exclusive screening of the new DBZ movie! Only at comic con my friends. No badge required! 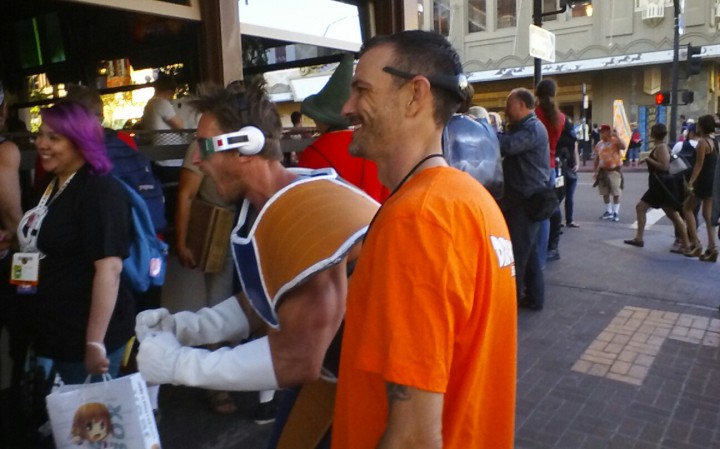 If you get lucky, you might even be invited to some of the more private parties, some hosted by celebrities in town for the con! There are also parties like the Geek and Sundry pop up that was only announced that day. If you know where to go, you can get in just fine (I missed it since I didn’t check my Twitter till the following day, but Nerd HQ did me just fine!).

One night I met a wonderful Starlord who liked my groot tattoo so much, he invited me to his costume party and I ended up partying on the Star of India Friday night with some amazing people! Shout out to Starlord Brendon and all the lovely people that night who accepted me even though I didn’t have a real costume! I just threw on my Union Jack flag left over from the 4th July. Yeah you heard that right! 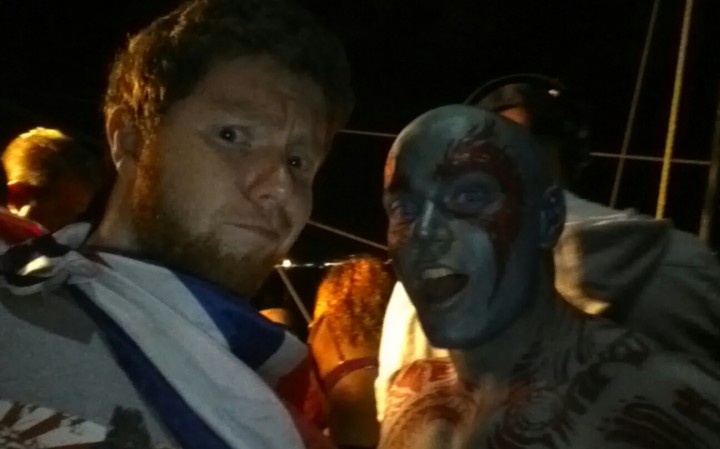 I had hardly any good boat pictures, they’re all dark and blurry. I’m on a boat though trust me!

Sunday night I got a ticket for Harmontown and did that. I’m not sure what else was on like that but that’s what I did. Yup. It was good!

So is it worth coming to SDCC without a ticket? Maybe. If you’re 21+. And just passing through. And have a ticket to Harmontown. And a Groot tattoo. And money.