Back in February we reported that Justion Monjo was working on a screen play for a Farscape feature film, well this weekend at Wondercon, series creator Rockne O’Bannon confirmed that a movie was in active development, joking “Yeah, yeah it’s the worst kept secret…We’re far from production, but yeah, the first step is Justin [Monjo] working on a script for us. We’ll keep our fingers crossed.”

O’Bannon also went on to praise Brian Henson and his contribution to keeping the project alive describing him as “…like a dog with a bone,” O’Bannon said. “He would not give up on it.” 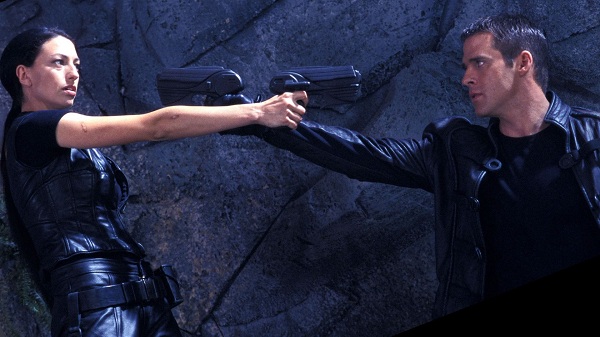 A plot description first came to light via Tor.com – Set to follow the awesome comics written by our favorite Keith R.A. DeCandido, the film would follow John and Aeryn’s son, D’Argo (or Little D, as we will always refer to him). Because their baby was exhibiting a set of interesting powers that made him a magnet for galactic villains, we find that John and Aeryn hide their son on Earth to grow up. Now the kid is 19 and ready to go into space with his parents.

Though still in early stages the confirmation that it is a in active production is very exciting for the fans of that strange and delightful breath of fresh air that was Farscape. Since it was cancelled 10 years ago there has been very little yo compete with the space opera that demonstrated such devotion to creating a variety of alien life, unafraid to push the boat out with the use of extraordinary sfx make-up, prosthetics and puppetry – seriously how many hours did that likes of Chiana, D’Argo and Zhaan spend in make-up?  It was an adventure that was committed to strong female characters, weird and wonderful story arc’s mixed in with a little comedy, intense drama and pow, pow action; let us not forget those frelling awesome long leather coats and big guns.

It is a genre that is very much missing from TV these days and I can think of very little that compares to the majesty of Farscape. And though we have no confirmation as to how many cycles it will be before we have the finished product we shall endeavour to keep you up to date with production news.

Editor and occasional writer for Geek Pride! I prefer Star Trek over Star Wars, collect comics and wish I could be a superhero one day. I tabletop RPG as well as a little gaming, design the odd t-shirt now and again, update my Geek Parenting Tumblr and when I have cash to spend (which is rare) I scour the internet for Wonder Woman collectables. Also Doctor Who and Firefly rock!!
More Goodness
brian hensonFarscapejustin monjo