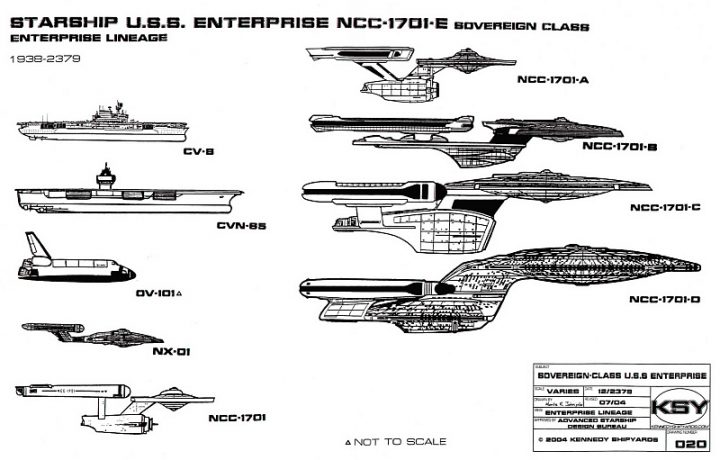 We’ve ranked the uniforms now we’re going to do it with the famous ships that have ferried our valiant crews to the final frontier. This ranking is purely on aesthetics which is of course a purely subjective trait. If ranked on sheer power alone the E and the D would kick its retrospective predecessor’s asses.  Truth be told this was one of the hardest lists to come up with so I shall be travelling very close to the bone with some of these decisions but as we all know most lists are total nonsense.

A holographic reproduction used for bizarre promotion ceremonies on board the holodeck which resemble a frat house hazing ritual. I would have liked to have seen Deanna Troi attempt that hat catch. The fact that this ship couldn’t go into space places this Enterprise firmly down at the bottom of this list. Useless!

The USS Enterprise was one of the largest “nuclear wessels” (see what I did there) ever constructed and of reveled with its association to the Star Trek franchise. Featured in the 1986 movie The Voyage Home, Chekov and Uhura had to collect radioactive particles from the ships reactor in order to power up their stolen Klingon ship. Though the US Navy were happy to feature the ship in the film the actual one depicted was the USS Ranger as the real life counterpart was on maneuvers. 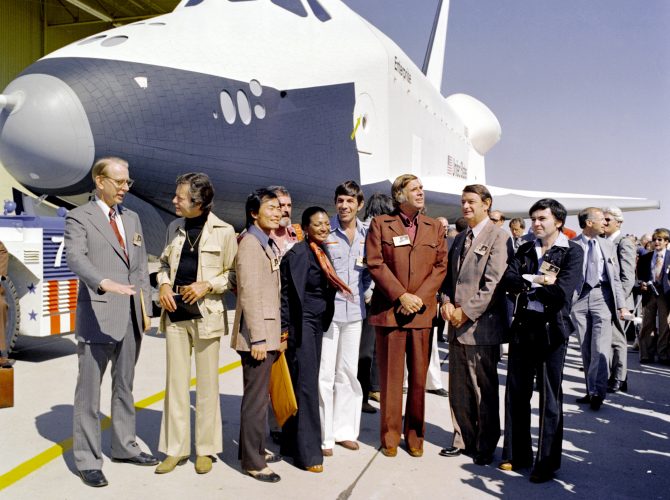 I had to include this Enterprise simply because of the real world Trek link. Interesting fun fact; a write in campaign to the White House actually prompted NASA to name their first space shuttle after the famous TV space ship. The cast of The Original Series were even invited to its roll out to the fanfare of the Star Trek theme. How cool is that? The Enterprise Shuttle was used for Approach and Landing Tests in late 1970’s to test the glider capabilities. Unfortunately the Enterprise was only a prototype and was never fitted out for space travel though there were nods to her on the Enterprise rec deck (ST:TMP) and Archers Ready Room (ST:ENT). She now lives in New York aboard an aircraft museum. 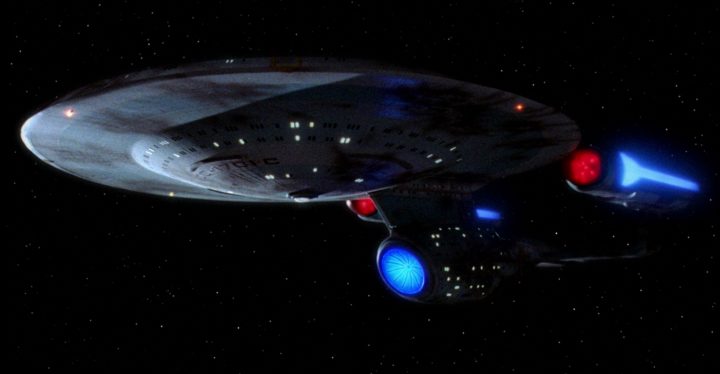 The Ambassador Class Enterprise C only made one appearance in the Star Trek universe in one of the most memorable episodes of The Next Generation. Appearing through a rift in space time the C’s disappearance leads to disastrous consequences for the main timeline. Representing a step between the Excelsior class and the Galaxy class, the Ambassador is a classic starship design with saucer section and engineering hull. However its lack of screen time relegates it low down this list. 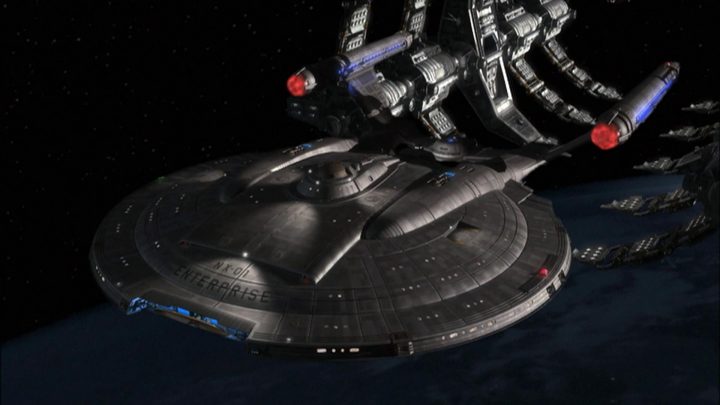 The NX class was the first warp 5 ship in the pre federation Trek universe. The challenge of designing a ship that predated the Original Series ships was a tough one; the ship has the classic two warp nacelle layout yet lacked an engineering hull and looked quite like the Akira class ship seen in First Contact. It was argued that the Akira would have been homage of a classic design in the 24th Century. Yet fans weren’t as warm to the vessel as they were to the TV show hence it coming in at number 7. 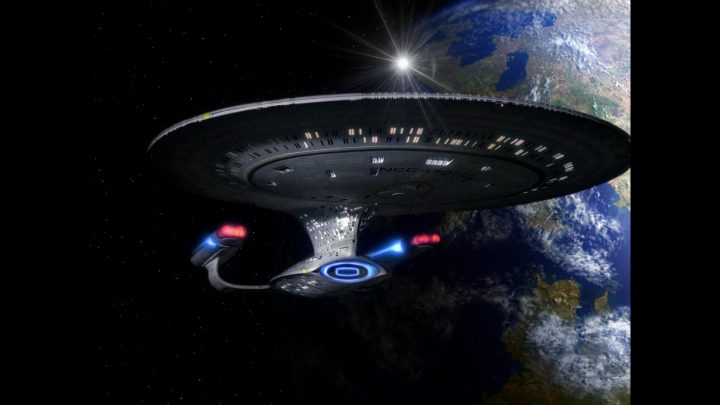 The Galaxy Class D was the ship the brought Trek into the 24th Century. With its plush interiors and fittings it looked like a intergalactic Marriot. Arguably this ship enjoyed more screen time than any of its sister ships across the franchise but familiarity breeds contempt in this Trekkie and the fact she had a rather ignominious end to a Bird of Prey (a freakin BIRD OF PREY!!!!) has left her off the top half of the table. 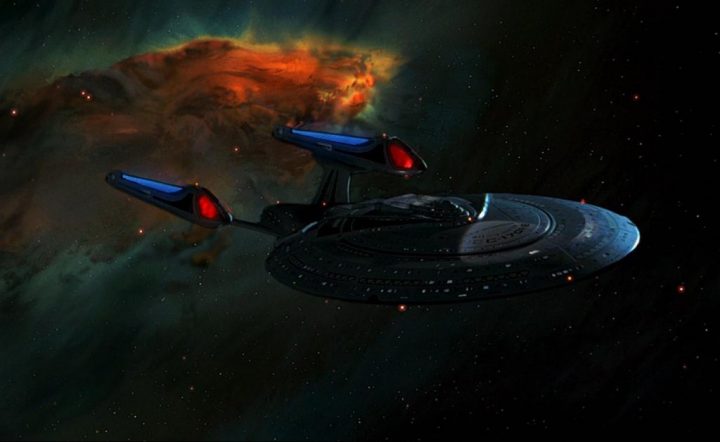 Sleeker, slimmer and brimming to teeth with weaponry, this was the ship to beat the Borg. The Sovereign Class is longer than her predecessor yet had a lot less volume than the Galaxy suggesting a move away from family orientated “city in space” explorer style starship. Whilst the principals of Starfleet had not altered by the late 2460’s the threats of the Dominion and the Borg had encouraged Command to design ships with a bit more bite e.g. the Defiant and Prometheus Classes. Overall the E is a looker in every aspect and her establishing shots in First Contact as well as her dramatic entrance to the Battle of Sector 001 is enough to earn her a place high up this list.

In at five is the new movie Enterprise which I feel is more than just a riff on a classic design. There’s been a lot of debate as to the size of this ship with sources pointing out that the scaling of the ship in comparison to the bridge and the shuttle deck puts her in league with a Galaxy Class. Like with a lot of things these days its go big or go home and this ship is a behemoth. What I do like about this ship is that its engineering areas look like engineering areas, rugged, tangible and more believable to the disco light warp core of the Next Generation. Thankfully Justin Linn toned down the lens flare in Star Trek Beyond giving us a real look at her bridge and interiors without getting blinded. Yes she looks like an flying iMac but the reimagining of the Kelvin Timeline Enterprise is imaginative and credible whilst mixing the touch screen with tactile controls. STB gave her many wonderful money shots at the beginning of the film as to heighten the loss when she is finally destroyed. The jury is still out on the new NCC 1701 – A from the alternate universe which has arched nacelle pylons. We’ll just have to wait and see what the next Kelvin timeline film has in store for us. 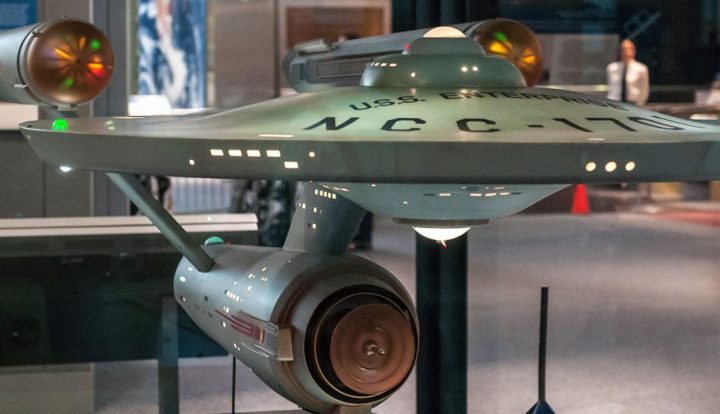 The Ship that started it all. The good old Constitution class. Kirks other woman. With it’s cigar shaped nacelles and saucer hull seeing the original enterprise tugs on the nostalgic heartstrings. This was the ship that made us dream of the final frontier. In fact the original studio model is so venerated that it resides in the Smithsonian Air and Space Museum alongside Apollo 11 and The Spirit of St Louis having been lovingly restored to full working order. How many fictional spacecraft can claim to hold that honour? Legend is oft overused but I think it applies to this starship. 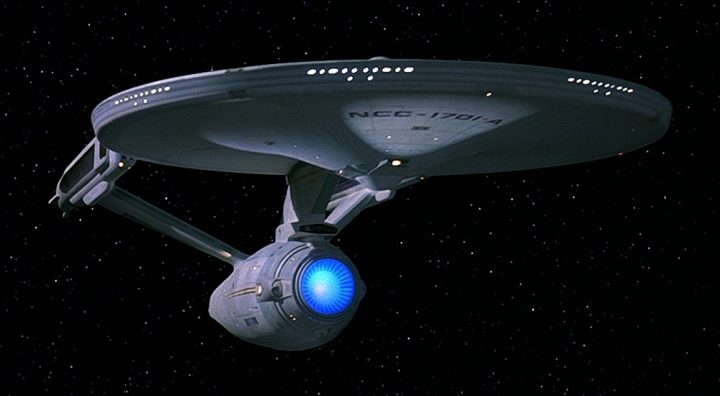 You’re probably wondering why the original NCC 1701 isn’t further down this list. How can you improve on a design classic? Its direct successor, the refitted Constitution Class Enterprise as made famous by the Trek movies, does just that. This Enterprise was centre stage at Trek’s most famous big screen moments such as the nebula battle with Khan and it’s tragic destruction in Search for Spock. But what bumps it up to the top spot has to be its premier appearance at the beginning of The Motion Picture. The slow mo reveal of the vessel in all its glory is catnip to starship aficionados, the detail in the livery, the running lights. Whilst the 60’s constitution class established the show and the franchise, it’s bright interiors and minimalist exterior have dated and leave many fans suspending their disbelief. The movie version is believable in every aspect. This is a fully living, breathing starship that can go to faster than light. For a ship that was designed in the late 70’s it still stands up there with the best of them. But what takes the number one spot?!?

Though she had very little screen time, the B, which was captained by Cameron from Ferris Bullers Day Off, is simply a gorgeous ship. Taking the already existing Excelsior class studio model the designers modified the ship with two dorsal impulse engines to the rear of the saucer section, added the flying boat style flares to the side of the engineering hull and replaced the blue trim with a beautiful teal palate. Yes she had no tractor beam, photon torpedoes or medical staff (all arriving Tuesday apparently) but that doesn’t matter. It’s what on the outside that counts. It’s a stunning looking craft and one that should deserve possible future story time.

Don’t agree with me?!?! Come at me in the comments. Cue Amok Time music.