previous
Gone Beyond the Veil - RIP Jerry Doyle 1956-2016
random
next
Superman to wear the Black Suit in Justice league?
Film and TV
0 likes

Jared Leto's joker
katana
pace
not a blockbuster like they aimed

A good movie that didn't deserve the flack it got from others. Some room for improvement though. 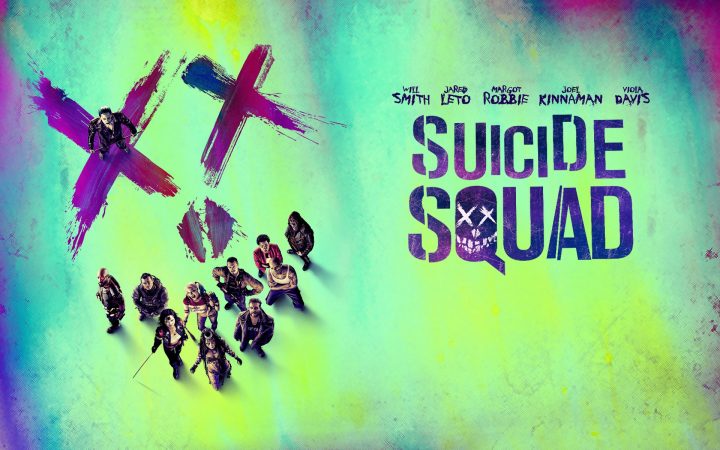 ****Make sure to check out the Suicide Squad Giveaway at the bottom of the review.***

I walked into the midnight screening at my local Vue with optimism and an unbiased mind, I had read the review that Rotten Tomatoes had done and I really couldn’t believe they hated it that much. So like a cat, filled with curiosity, I took my seat and waited for the magic to begin.

First off, before i delve into my review let’s have a run down / a quick catch up on who and what the suicide squad are! 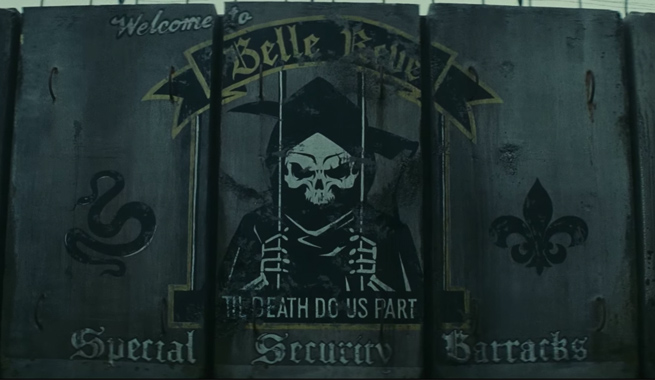 The Suicide Squad initiative functions as an unorthodox work release program, which explains why many of the DC Universe’s supervillains remain perpetually on the loose—regardless of how many occasions they are apprehended and incarcerated for their latest crimes. The modern incarnation, the Suicide Squad, is an antihero “strike team” of incarcerated, death row supervillains. Acting as deniable, covert assets of the United States government, it undertakes high-risk, black-ops missions in exchange for commuted prison sentences. The group operates out of Belle Reve Penitentiary under the directorship of Amanda Waller.

In December 2014, the cast of the film was announced.

In addition to confirming Will Smith as Deadshot we had Jared Leto as the Joker, Margot Robbie as Harley Quinn, Joel Kinnaman as Rick Flag, Jai Courtney as Captain Boomerang and Cara Delevingne as Enchantress. Out of the blue and in a remarkable twist, Oprah Winfrey, Viola Davis, and Octavia Spencer were considered for the role of Amanda Waller, with Viola Davis winning the role. Ben Affleck reprises his role as Batman from Batman v Superman: Dawn of Justice. 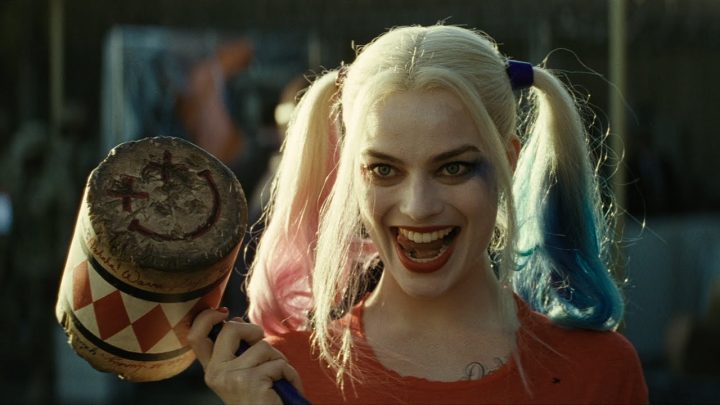 Most people have already seen the devastating review on rotten tomatoes and from other, if not short sighted critics, you could tell by the atmosphere of the cinema screen I was in that it had left a sour taste in their mouths. Well I’m here to tell you a simple truth; “it ain’t all bad”, in fact its really good!

If you stop seeing it as a standalone film but rather a bridge between BVS and JL, then you’re going to follow it really well. I laughed, I cringed, I cheered and I may have also gone “mmmm” at a few scenes but hey, I’m a red blooded male!

So let’s cover the story shall we:

In the aftermath of Superman’s death, intelligence operative Amanda Waller assembles a team of dangerous criminals, the deranged Harley Quinn; elite hit man Deadshot; pyro kinetic ex-gangster El Diablo; opportunistic thief Captain Boomerang; the monstrous Killer Croc; and specialized mercenary Slipknot at Belle Reve Penitentiary and places them under command of Colonel Rick Flag. They’re disposable assets for high-risk missions and each member has a small bomb implanted in their neck designed to detonate should any member rebel or try to escape. Enchantress is the naughty wench who does the ole ‘destroy the world’ ploy with the help of her equally magical and naughty brother Incubus, so it’s up to our merry band of misfit’s to save the city. 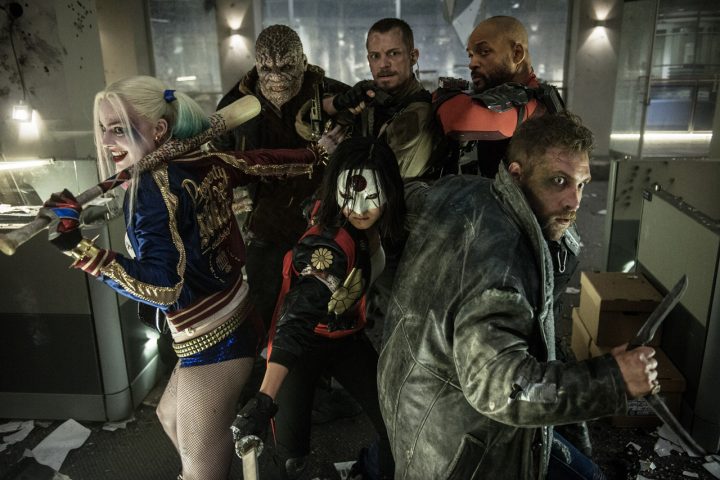 This film sets the tone just like Guardians of the Galaxy did; to a soundtrack. Which works brilliantly and you can tell David Ayer really wanted the action sequences to have an action feel and rhythm to them, so he featured music by the likes of ‘Creedence Clearwater Revival, Eminem, Black Sabbath, Panic! At the disco and Sweet’ already a soundtrack I’d love to own. Will Smith’s portrayal of ‘Deadshot’ was outstanding, with Smith taking ‘Floyd Lawton AKA Deadshot’ and almost pulling him out of the comic book. The relationship with Lawton and his daughter is well written and the emotion and attachment between the two is heart warming, if slightly tragic. 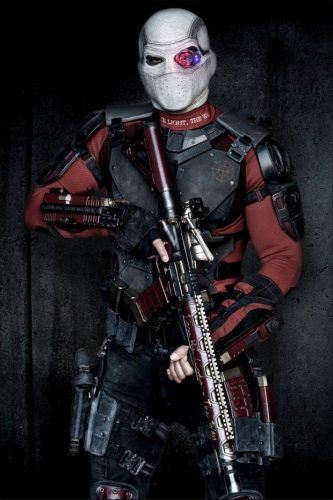 Margot Robbie as ‘Harley Quinn’, now there’s been a lot of controversy surrounding Margots version of ‘Harley Quinn’. It’s been scrutinized, picked apart, even been deemed too sexualized for the film. It’s this geek’s personal opinion that people really need to lighten up when it comes to a comic book character who over the years has had a very colourful array of costumes and may I add skimpy ones too, some border lining on BDSM. ‘Harley Quinn’ is in my eyes a great addition, she’s the perfect blend of cute, crazy, sexy and lethal all wrapped up in hot pants and a baseball bat. So in review, let’s just appreciate the fact Harley is on the big screen and her finer moments aren’t with her “puddin”.

Jai Courtney as ‘Captain Boomerang’ was in my eyes the Comedic asshole we all know him to be and his scenes did leave you chuckling, his arrival into the film was welcomed by a great cameo from our very own Scarlet Speedster. Jay Hernandez as ‘El Diablo’ and Adewale Akinnuoye-Agbaje as ‘Killer Croc’ have some of the best scene stealing moments in the film, to the point I really wanted to see more of them especially Diablo. 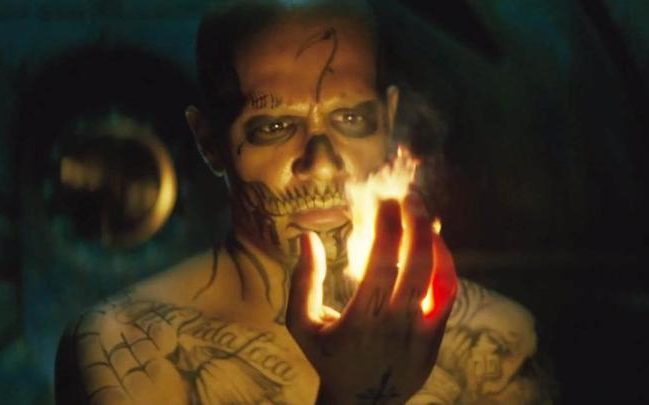 The action sequences in Suicide Squad are just that but the thing that makes them really good is that the Director had the foresight to add some fun into them. Consider the Suicide Squad the dark side version of the Guardians of the Galaxy, once you except that and stop being so cynical about it you can actually enjoy the film. The CGI and special effects are something else, from Enchantress and her mists, diablos fire and the prosthetics covering three quarters of Adewales body, you almost believe he’s a croc. 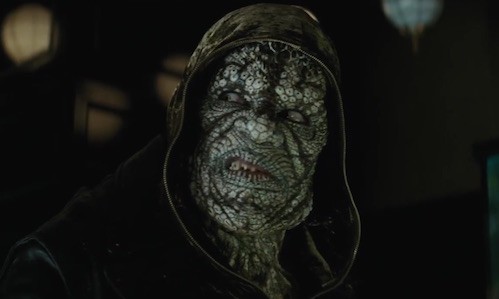 The Batman! Even though his scenes were minor and short lived, it was fresh to see Batman from the bad guys POV, silent, deadly and badass exactly what we’ve come to expect from Batfleck.

Jared Leto as the Joker… 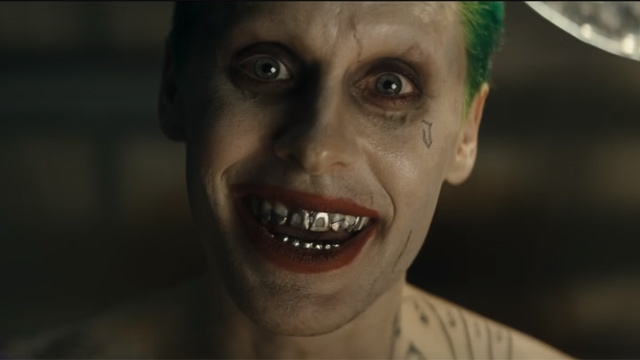 He was never my first pick as the clown prince of crime, as a fan of the joker I always wanted Willam Defoe to play him but Leto it was to be. Now, I know the writers and Production Company wanted a new and up to date joker; a Gangster, a mob type, almost cocaine fueled maniac, ala Heath Ledgers Joker but hat we got was a James Cagney, tattooed, teeth grill, eye brows shaved joker type Kardashian that couldn’t laugh on cue if his life depended on it.

The laugh alone I think was a deal breaker for me; like an old man who’s been constipated for weeks and only now the laxative he took has worked. That’s the joker laugh of Jared Leto! Forced!

The relationship between Joker and Harley is something I wasn’t expecting, Mr. J is obsessed with getting Harley back from Belle Reve, to the point he’s willing to die for her. That’s not the abusive and violent not giving a crap about Harley Mr. J that we all know and love. Instead, it’s more of a dependent on her, he can’t be without her and goes to great lengths to get her back.

Kitana, I honestly feel there was no point to her character being there, she didn’t play a huge role and didn’t have to be added to the already stella cast line up. Shame as her character is an interesting one and Karen Fukuhara was an excellent choice for her; unfortunately this was no maximised and so her character was left pretty ineffective.

Finally, the pace of the film!

I have never witnessed a film more wanting to go from start to finish in record time. Suicide Squad started and then before I knew it they were out, mission was a go, fighting in the city, hooray they won and the lights were coming on in the cinema. The story was there but the pace of the feature was all too fast to keep up with what was going on.

Rotten Tomatoes and other critics didn’t, in my opinion, give the film a fair review, in fact, it makes me wonder if they even saw the film  at all or just used the trailer footage to come up with their sham use of webpage space.

This Geek? I enjoyed the film. Bright, loud, humerous and a hell of a lot of gun fire; Suicide Squad is a great bridge movie and undeserving of the recent ridicule from over zealous ‘critics’

NOTE: there is a mid credits scene, so don’t leave the cinema straight away! 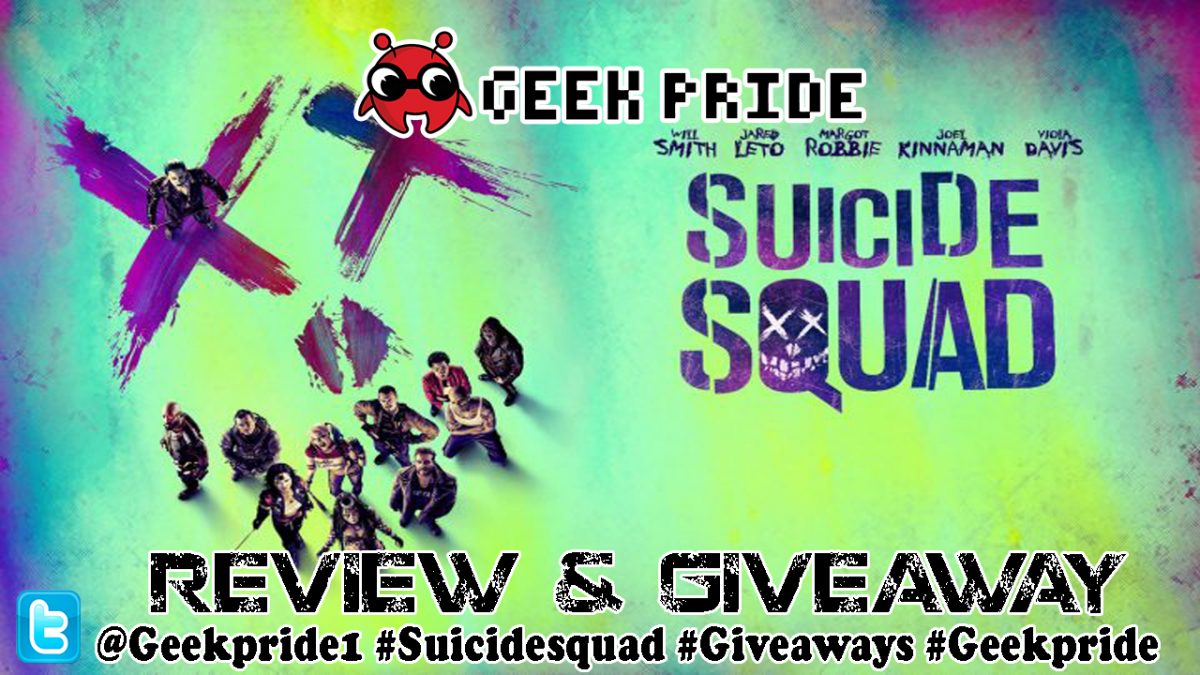 On August 5, meet the worst heroes ever when Suicide Squad arrives in UK cinemas!

To celebrate the imminent debut of the bad guys from Belle Reve, we’re offering you the chance to win an incredible prize bundle, which includes: a black hat, LED Power Bank, playing cards and more!

All you have to do is answer the following easy Question, Tweet the Answer (A, (B or (C with the hastags #Suicidesquad #giveaways #Geekpride and make sure to follow us  @geekpride1

Question:
Suicide Squad stars this Australian actress as Harley Quinn – aka Dr. Harleen Quinzel – a former psychiatrist who fell for her most famous patient – the Joker – and now views life as one big joke. This actress is best known for her breakout role in Martin Scorsese’s The Wolf of Wall Street and the recent Whiskey Tango Foxtrot. Name this actress.

It feels good to be bad… Assemble a team of the world’s most dangerous, incarcerated Super Villains, provide them with the most powerful arsenal at the government’s disposal, and send them off on a mission to defeat an enigmatic, insuperable entity.  U.S. intelligence officer Amanda Waller has determined only a secretly convened group of disparate, despicable individuals with next to nothing to lose will do.  However, once they realize they weren’t picked to succeed but chosen for their patent culpability when they inevitably fail, will the Suicide Squad resolve to die trying, or decide it’s every man for himself?