previous
The Hobbit: an Unexpected Journey ( 3D IMAX) 8GPP
random
next
“Berlin to me, meant boys” Christopher and His Kind review - 9GPPs
Film and TV
0 likes

Straight to the Point: “The Snowmen”, the eagerly awaited Christmas special of Doctor Who was a whirlwind journey of nail biting adventure into a world where Frosty the snowman isn’t so jolly as first expected, and, I loved every minute.

The episode made it to our TVs on Christmas Day and the programme begins with us meeting a young boy, isolated from the other children, who found that the snow started to talk to him. As a grown man, Dr Simeon (played by Richard E Grant) now runs The Great Intelligence Institute, a clever front for a darker motive. We then meet The Doctor (played by Matt Smith), now living in a box on a cloud, no longer wanting to meddle in the events of the world below, until he meets a spunky barmaid named Clara (played by Jenna-Louise Coleman) who doesn’t run from the crazy truth of what is happening; sentient snowmen, frenzied ice women, the reptile lesbian Madame Vastra, (played by Neve McIntosh) and a “psychotic potato dwarf” Strax (played by Dan Starkey). Together, they must stop Dr Simeon from taking over Earth with human/ice creatures but first, can they get the doctor to help? Yes, of course they can. 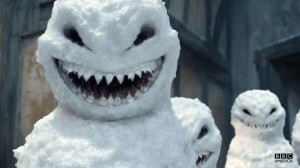 It was an emotional reunion with The Doctor on my part, now with his grumpy bear face and tinted with cynicism. Not the Doctor we knew, however, there is always the curiosity and concern he has always had just underneath his thick exterior, and as the storyline progresses, he struggles more and more to hide this. The show has not lost any of its humour, wit or charm and the hauntingly beautiful music only accentuates the emotionally charged decisions he has to make.

I found myself on the edge of my seat from the very beginning and a flurry of spine tingling came into play as we meet the new companion. I liked her; and she reminded me of someone don’t you think? Yes, that’s right, soufflé girl from “Asylum of the Daleks”.

A new companion to accompany a new TARDIS interior; sleek, shiny and riddled with Gallifreyan writing. I have to give this a giant thumbs up. Badass, in a single word. Even more excitement came into play, having me jump up and down with excitement when The Doctor finally succumbs to temptation, and stomach tingling as he adjusts his bowtie, yes, it is still with us, and then kicks some snowman ass. 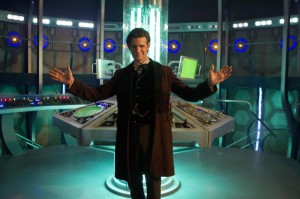 One tiny minuscule criticism I have would be the link between the tears of a family at Christmas overpowering the snow consciousness, making it rain and thusly washing away the snow was a bit tenuous for me. Made me shrug my shoulders and would have made me raise an eyebrow (if I could do that). However I accepted it and saw the link through the misty fog of relativeness.

To finish us off it is a great sadness when Clara dies, and just as quickly we are back to anticipation as we end the show with an image of the newly reincarnated Clara (name yet unknown) stood next to her ancestor’s grave.

All in all, a fantastic special and as usual, like with all the other episodes, I will never look at snow the same way again. I will always ask the question, “Is this snow going to read my mind or is it ash from a fallen spaceship?” A journey of a man who wants to be forgotten but the universe, contrary to his belief, does care, and will not let him disappear as the universe needs The Doctor, just as much as he needs it. 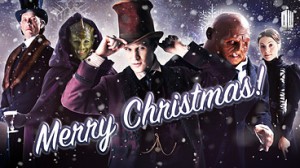 Here is me in the form of a haiku: My name is Jodie, Love fun, love hugs, loving life, To write is to be.
More Goodness
breakingchristmas specialDoctor Who