Lorraine and Ed Warren (Vera Famiga & Patrick Wilson) are demonologists with a reputation for dealing with hauntings and possessions, and disproving supernatural events with rational explanations- amongst numerous other cases, they gained fame for dealing with the Amityville Horror.  In between handling cases they give lectures on demonology and what they have seen.

Roger and Carolyn Perron (Ron Livingston & Lili Taylor) and their five daughters have just moved into a farmhouse; it doesn’t take long for the Perrons to realise that something is very wrong in their new home, and Carolyn tracks down the Warrens for help. 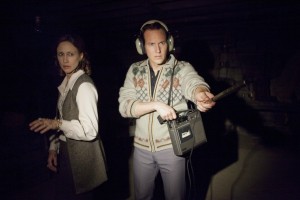 The Warrens doing their thing.

surprising to see that Wan has apparently turned his back on such things and become quite the auteur of modern atmospheric horror. Insidious may have been impressive but The Conjuring has Wan really coming into form.

Of course a pretty common initial response will be ‘It’s a haunted house story? They’ve been done to death’ which is true, but one of the many impressive facets of The Conjuring is that, although initial disturbances will be very familiar, this is an impressively subversive way of lulling the viewer into thinking it’s ‘just another haunted house film’ before things really start to happen.

The 70s setting is well realised but it’s never done in a blunt in-your-face manner, more via the wardrobe and style of the characters.

The Warrens and the Perrons initially feature in their own separate narratives with Ed giving lectures whilst Roger and his wife move their large family in to their new home. A long tracking shot serves both to introduce the numerous members of the family, with the sisters bickering over rooms, but also sets up the geography of the house.

Wilson and Famiga have a good chemistry and make a believable couple, and some mythology for the pair is quickly established with Wilson giving a reporter a tour of their extensive collection of occult items all from previous cases. This establishes the Warrens as being used to dealing with the supernatural- even though Ed states 90% of the time things have a perfectly rational explanation.

Livingston, one of the best character actors around, doesn’t really get much to do as the patriarch to a family besieged, although it’s quickly summarised why they don’t just move out in a scene which deals with one of the pertinent questions always aimed at this sub-genre. It falls to Taylor to really carry the narrative along with Wilson and Famiga  becoming more and more desperate for answers.

The reason The Conjuring works so well is this story is composed of numerous separate pieces of a larger puzzle; watching the Warrens try and fit these pieces together before another disturbance occurs is absorbing. 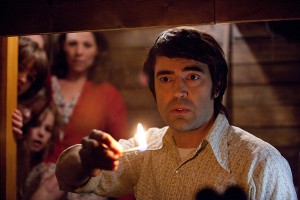 What was that noise?

There’s a lot to be said for the power of the imagination and the mind’s eye and this is something that Wan clearly understands, utilising sound -a scene where the Warrens listen to a tape recorder being particularly effective- and darkness well. Some of the most memorable and effective scenes are those which invert the regular perspective, with the frame settling on the terrified face of one of the younger Perron sisters as she reacts to something off camera for example.

Atmosphere is a hard thing to get right, however there are no such problems here as the tension gets cranked higher and higher and just when things seem to have peaked there’s another sudden jolt. Wisely there are some well timed comedic touches too as the story keeps building towards an impressive crescendo.

Whilst it’s not flawless, the ending is somewhat disappointing given what precedes it; writers Chad and Carey Hayes together with Wan have used the numerous cliches associated with the ‘haunted house’ film to excellent effect, added their own twist and crafted one of the most impressive modern horror films in quite some time.

Andy Haigh started writing to counteract the brain atrophying effects of Retail Hell, now it's an addiction. Andy is an unrepentant sequential art absorbist and comics are one of his passions. Other interests include Film, Music, Science Fiction and Horror novels and quality TV like Game of Thrones. He can talk about these at great length if only someone would listen. He lives a somewhat hermit like life in The Shire, spends too much time on social media and is still waiting to go on an adventure.
More Goodness
breakingCinemaFilm