I’m a Teen Wolf fan and I’m not ashamed to admit it (I would have been if I had liked season 1, but that’s water under the bridge now). Regardless, hearing that one of the cast members of this show (Dylan O’Brien) was going to star in a new comedy with Owen Wilson and Vince Vaughn, made me buy a ticket and see what the fuss was all about.

I don’t like comedies in general, most of them rely on poor humour, hoping to make the audience laugh, but while it might achieve that goal, I would still leave the theatre with a bitter taste in my mouth. Smart comedy is hard to find and while The Intership is not some masterpiece of comedy, it was still incredibly amusing and along with the rest of the people in the theatre I found myself rooting for 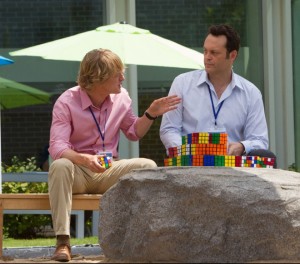 The story is simple and I’m sure we’ve all seen it before. The Internship doesn’t pretend to be ground-breaking, but while it uses the beaten path, it does it in a way that manages to seem fresh. Let’s see: we have two forty something, unskilled individuals who find themselves out of a job right before they thought they were going to make the deal of their lives. It’s something a lot of people will be able to related to, that awful wake-up call when you find out you’re obsolete and all of your work for the past decades has been in vain, because ultimately it doesn’t matter. The film doesn’t lay it on thick though, it’s still a comedy, but while it focuses on the dramatic parts, it does so carefully, because it does tell the story of anyone that has found himself or herself in that situation.

Billy(Vince Vaughn) is the half of the magic duo that has a brilliant idea to solve their monetary problems: applying for an internship with Google. While Nick (Owen Wilson) is initially reluctant, he accepts that this might be the thing to change their lives and they ship off to San Francisco to be met with an unexpected sight. Hundred of young people, some barely out of high-school, who will be their competition. It’s where the movie takes a bit of a cliche stand: the underdogs are grouped together, they struggle with bonding with one another and winning the challenges set up in order to determine who is the best. I won’t tell you how it ends, but I’m sure you could have figured it out for yourselves already. Still, the journey from the very first moment to the credits is hilarious, the jokes are for the most part in good taste, though I’m sure there will be a lot of people commenting on the perpetuation of certain cliches: the 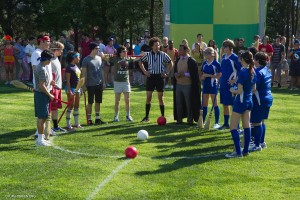 nerdy virgin girl (Tiya Sircar), the smart Asian that has an overbearing mother(Tobit Raphael), the rebel without a cause (Dylan O’Brien). Still, they somehow work, because at the end of the day they all learn something and become better people for it.

It wouldn’t be a movie if there weren’t a villain, portrayed by Max Minghella. His character, Graham, is amusingly nicknamed Draco Malfoy, made all the more amusing by the Quidditch game they are forced to play in order to win one of their challenges. This movie abounded in references to comics and sci-fi, as well as fantasy books. It actually made me a little sad when I noticed half of the people in the theatre seemed confuse as to who Charles Xavier was or a plethora of other things that seem so natural to me.

We have the good guys, we have the villain, what do our heroes need? Or at least one of them? A love interest, of course. While a bit far-fetched (but we’ve already established that The Internship is less about accuracy and more about fun) Nick ends up smitten by a gorgeous Google employee, Dana (Rose Byrne) who returns his affection, if only briefly. Our rebel without a cause and our nerdy girl also seem to hit it off, leaving things to our imagination.

The Internship isn’t groundbreaking, but it’s funny and really, I think it made everyone in the room eager to work for what looked like the largest playground in the world: Google. While I don’t know if things are as cool there as they are portrayed in the movie, it still made me want to pick up a book and learn all that there is to know about the world of coding and apply for a job there. My advice? Go watch the movie, I can promise you you won’t leave the room with a straight face.

What's there to say about me? I love the sci-fi and fantasy genre when I read, but I am in no way limited to that alone. I do think Frank Herbert deserves a statue for his writing(if there is one, point me in that direction, please). I enjoy writing quite a lot, but I am also kinda lazy. If you want to make me happy give me books or Doctor Who collectibles. Or a real TARDIS, in which case I will love you forever.
More Goodness
dylan o'brienowen wilsonVince Vaughn