previous
Transformers: The Last Knight - Not-so good knight?
random
next
What Is The Best Season Of The Walking Dead?
Film and TV
0 likes

May help you with your insomnia.

In an age where premium quality TV is everywhere The Mist really doesn't deserve anyone's time. 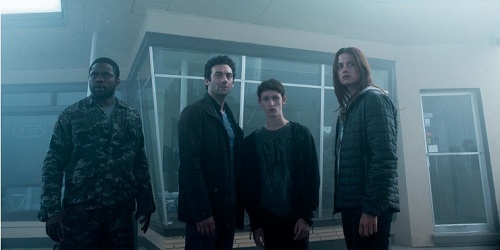 The Mist, based on a short story by Stephen King, has a pretty simple concept. A strange mist descends upon a small town in America. There are things in the mist. Bad things. A selection of characters, who have various histories between them, hole up to wait it out.

One of the major differences between this show and the story it’s based on is there are far more characters, and those characters are scattered throughout the town, Bridgeville, Maine, when the mist hits rather than holed up in one place together.

Eve (Alyssa Sutherland) has just been suspended from her teaching job for the crime of wanting to teach sex education.  Kevin (Morgan Spector) and Eve also really don’t agree on parenting styles for teenage daughter Alex (Gus Birney). The main cause of conflict being Eve is hyper protective of her daughter, whilst Kevin is more laid back thinking she has to actually get out and live life.  Alex, with Kevin’s permission and without Eve knowing, goes to a frat party, has her drink spiked and wakes up the next day having been raped. The towns star footballer Jay (Luke Cosgrove) is apparently the culprit, his father is the town sheriff.

Alex’s best friend Adrian (Russell Posner) is the town outcast, an eye shadow wearing woke gay teenager with a father who can’t bare to look at him and a mother that happily tolerates his father’s behaviour. Elsewhere in the town junkie Mia (Danica Curcic) is desperately searching for, well, something, after being caught trying to dig something up someone’s shed and Bryan (Okezie Morro) is an amnesiac soldier who wakes up on the outskirts of the town seeing the mist roll in, and also seeing Rufus, the dog he presumes is his, meeting an unpleasant end in said mist.

The Mist presents such a cliched slice of small town America it’s surprising that there isn’t a school shooting or some overt racism and police brutality. Crucially though it gives you very little reason to care about any of these people for the main reason that with few exceptions they are either incredibly bland or horrible. There’s little tension generated when you don’t care about the characters. At all.

When the mist rolls in Alex and Eve are in the same place as Jay, a shopping centre, whilst Kevin and Jay’s father are holed up in the local church. So the victim of a sexual assault is trapped with her alleged attacker, and various other people, whilst her father is with the local sheriff, the father of the alleged attacker, who is probably the most horrible character of them all. The Mist relies heavily on the sexual assault of Alex and how it impacts various people to generate drama and tension because apparently it’s impossible to make a TV show that doesn’t feature sexual assault now. The official line is it was inspired by a disturbing rape case in America with the sexual assault of Alex being a display of “an underlying hatred and misogyny that I thought was incredibly timely and relevant,” to quote show creator Christian Torpe.

Beyond the borderline exploitative narrative device of sexual assault playing a fundamental part there’s a reliance on shock scares which don’t really work for several reasons. Things happen to characters that have been barely established and when they do they’re not done well from a visual effects perspective. More than its bland characters and contrived drama the thing that really stands out is The Mist clearly doesn’t have a high enough budget to pull things off. Everything that happens to people in the mist is done via unconvincing rough looking digital effects. This in itself wouldn’t be so bad if everything else wasn’t so lacking too.

The Mist is completely and utterly lacking in any sense of atmosphere, which is quite an achievement for a show that has an atmospheric environment at its core. The only real reason to keep watching is to hopefully see these characters die horribly in some way, a bit like cheering on Jason as he methodically kills teenagers in a Friday The 13th film.

The Mist could work really well as a TV show. A tense and atmospheric exploration of a small town community slowly but surely giving in to the pressure cooker effect of being cooped up together. Grudges old and new flaring up, friends becoming enemies as paranoia runs rampant whilst the mist lingers outside, unfortunately this isn’t that show.

Andy Haigh started writing to counteract the brain atrophying effects of Retail Hell, now it's an addiction. Andy is an unrepentant sequential art absorbist and comics are one of his passions. Other interests include Film, Music, Science Fiction and Horror novels and quality TV like Game of Thrones. He can talk about these at great length if only someone would listen. He lives a somewhat hermit like life in The Shire, spends too much time on social media and is still waiting to go on an adventure.
More Goodness
TV review