Notice how none of the positives were connected to the storyline? Yeah. 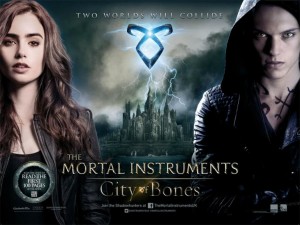 A while back someone recommended the Mortal Instruments book series to me and, after determining it’s basically your run of the mill young adult fantasy book, I read it. I actually liked it a lot more than I expected and the prospect of a movie had me excited about seeing the characters I ended up loving,  come to life on the big screen. Then I went to see the movie and all that excitement deflated like a balloon. After months of anticipation (with way too many trailers and bits of the movies released until its due date for it to be healthy) I finally bought my ticket, happily telling two of my more skeptical friends that they will love it. Funny enough, they actually ended up liking it more than I did.

Here’s what’s wrong with this movie, at least in my humble view: it tries to do too much with too little time, cutting out important parts of the story that are more or less the foundation of it; the little bits and pieces that bring some form of logic to the tale. At least on paper. Maybe the editor or the screenplay writer wasn’t aware that (shockingly, I know) not just the book fans would watch the movie. Too many details were missing, making it nothing but the tale of a girl that likes a boy that’s liked by another boy that’s liked by a warlock and so on. If that last sentence made no sense, don’t worry, the situation makes less sense in the movie. Why? Because somehow the director, the writer, the producers and maybe even the actors, forgot that in order to have a believable story, particularly one that delves in a world of demons, werewolves and vampires, you need to build it up. You need to show me, and the other viewers, why A+B=C, without me having to pull out the book out of my pocket to try and make sense of what’s going on and why.

Here’s the basics: Clary Fray (Lilly Collins) starts drawing a random pattern over and over again. Her mother (Lena Headey) wants to protect her from whatever it is that’s hiding in her mind, but fails to do that when she’s attacked by demons and two old enemies, sent in by her husband, Valentine Morgenster (Johnathan Rhys Meyers). He’s after an important thing she stole from him years ago, one of The Mortal Instruments- the Mortal Cup. Girl meets boy -Jace Wayland, played by Jamie Campbell Bower- and in five seconds flat falls for him and vice versa. She also discovers she’s not quite human and has to journey through the murky secrets of the past to figure out how to deal with this revelation.  So far so good, except everything is set up awkwardly, the actors that form a stellar cast are severely underused, making important characters in the books look like nothing more than extras on screen and the story is chopped up into little bits, thrown into the air and pieced together in a completely arbitrary fashion, making for a whole new different story. 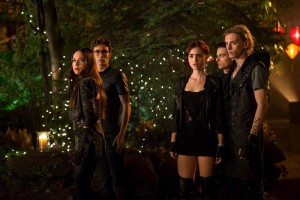 Aidan Turner, who plays a scruffy werewolf in this story (yes, I did snicker at that a bit) is barely in the film, Kevin Zegers, playing Alec Lightwood, yet another important character, is demoted to eye candy and nothing more, making him seem like a jealous individual with no redeeming qualities, despite the fact that he has them. I promise you that. Those five seconds of him trying to save Clary pale by comparison to him being an ass throughout the film to a girl that has just lost her mother to the greatest villain of the Nephilim world. And don’t even get me started on Valentine Morgenstern, who is here nothing more than a hopped-up-on-power lunatic, while in the book he was a charismatic and suave manipulative bastard.

My problem with this film isn’t necessarily that they didn’t follow the book to the letter, I know that’s impossible and more often than not an actual hindrance to the story, however, there’s a difference between adapting a story to make a film and completely Percy Jacksoning it for the big screen. Through the plot holes that were so wide that the Titanic could’ve easily sailed through them, they’ve set themselves up for a major retconning sessions in later movies.

Which, incidentally, might never happen, since supposedly the filming, which was scheduled to start next week, was indefinitely postponed due to the movie faring rather badly on the box-office. Again, I think that everyone forgot or ignored that all it takes today is for someone to make a tiny post about how bad a movie is, for it to become viral. They also forgot that the Mortal Instruments has not only the tame fans that gritted their teeth through two hours of book butchering, but also the type of fans that would take to Twitter, Facebook and Tumblr and present their vitriolic opinion on seeing their beloved book reduced to a simple love story. Surprisingly, while the love story is a focal point of the books as well, if it’s removed, there is still a decent plot. 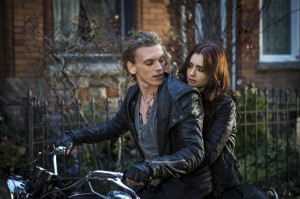 Again, on paper. Take love out of the equation in the film and not much is left, because this was the Campbell Bower/Collins show. It wasn’t so much an adaptation as a different story, whose characters happened to have the same names and a somewhat similar plot device. Like London with Zeppelins and Rose as a puppy.

All in all, the movie is watchable and entertaining, if you’ve never read the books and if you would rather google things when you get home to figure them out, instead of seeing them neatly presented on screen. But again, watchable. The effects are not bad, though the demons made me laugh a little, since in my mind they looked completely different; the soundtrack is lovely and the acting is decent (too bad we see so little of it, since they were too busy throwing us off with neat special effects and confusing storytelling).  The rest of it though drags it down severely, making it one of the many (because I’m sure many more will follow) book adaptations that will not find the same success as the Hunger Games. Funny enough, THG was also made for those that had read the books, more so than for the rest, but it managed to explain everything much better, without throwing random information at you,  letting you puzzle over where exactly it’s supposed to go.

Ultimately it’s a matter of taste. I didn’t like it from a reader’s perspective, but I’m sure others have positively gushed over seeing the characters on screen. If you liked it, by all means, tell me why, I might have a change of heart. If you didn’t, let’s eviscerate it together. It’s what the comment section is for.

What's there to say about me? I love the sci-fi and fantasy genre when I read, but I am in no way limited to that alone. I do think Frank Herbert deserves a statue for his writing(if there is one, point me in that direction, please). I enjoy writing quite a lot, but I am also kinda lazy. If you want to make me happy give me books or Doctor Who collectibles. Or a real TARDIS, in which case I will love you forever.
More Goodness
alec lightwoodisabelle lightwoodjace wayland