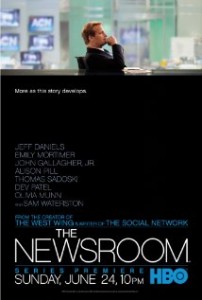 When The Newsroom was initially recommended to me I was nervous. I didn’t want to dislike a show that the recommender loved so much but I was apprehensive because it has a political lining; something I tend stear clear of, for fear I might not understand it. However, I decided to give it a chance and I regret nothing.

Created and written by Aaron Sorkin, who is more popularly known for writing the scripts for The Social Network and Moneyball,  The Newsroom centres on the behind the scenes of ‘News Night’, a news show on the fictional Atlantis Cable News (ACN) channel. Focusing primarily on its workings, as well the crew: anchor, executive producer the producers and researchers.

The first scene of the pilot is fantastic, brilliantly written, captivating and the show doesn’t lose your attention from then on. In fact, it is so interesting that I watched all 10 episodes of the first season in a period of just over 24 hours! Not great for my eyes, but great for my mind. The script is serious and intelligent but with enough humour to lighten the mood and complete a delicious recipe for some great watching.

The acting is great, especially by Jeff Daniels (Dumb and Dumber, Speed) who plays the main anchor. Will McAvoy. The cast does seem as though they’ve been plucked from a great variety of places and you’ll see some familiar faces including Dev Patel (Skins, The Last Airbender, Slumdog Millionaire). 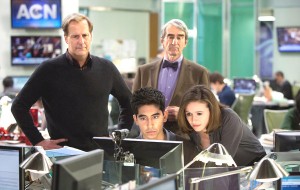 The Newsroom is heavily character driven and what interested me most about the cast is that I was expecting to dislike some of them from their first impressions but they are so well developed, even those who don’t seem especially crucial to the overall show, that you can’t help but like and understand them and their actions.

The blend of a fictional TV show reporting on real life events makes the concept of Newsroom much more intriguing and had me wishing that News Night was on our own television screens. It isn’t even essential to have knowledge of American politics or of any of the events reported by Will McAvoy, as it’s not the focus of the show. There is a romantic element to it but not too overbearing; although I feel it could be toned down just a little bit.

If you like Suits, you should love The Newsroom; fast talking, intelligent dialogue and a great cast.

As you can tell I love it and thoroughly recommend you give it a watch. Season 2 is airing in the US on July 14th and I cannot wait.

I'm a movie lover of all genres, particularly comic book films, as well as some television shows such as Community. I enjoy fiction writing and blog writing and I sometimes dabble in reviews.
More Goodness
hbojeff danielspolitics

The Umbers Ruse, Lady Stone Heart, Coldhands and the Door