Logan (Hugh Jackman) now living in self imposed exile in the Canadian wilderness, is tracked down by Yukio (Rila Fukushima) on the behalf of Yashida (Hal Yamanouchi) a man from Logan’s past. Yashida, the head of a massively successful tech company, is now dying and wishes to see Logan before the end. Reluctantly agreeing to visit Tokyo at the behest of his dying friend. Logan finds himself dragged into unexpected events.

After the mess that was X-Men Origins: Wolverine, this latest from the Fox stable of Marvel films has a lot of pressure on it to be the film that Wolverine fans have been wanting.

Inspired by a fan-favourite Wolverine story from the early 80s written by Chris Claremont and illustrated by Frank Miller, this latest outing for Logan is definitely an improvement on the last.

For a start, transplanting the setting from the generic USA of previous films to Tokyo makes for a refreshing change, the crowded and illuminated streets are rich with 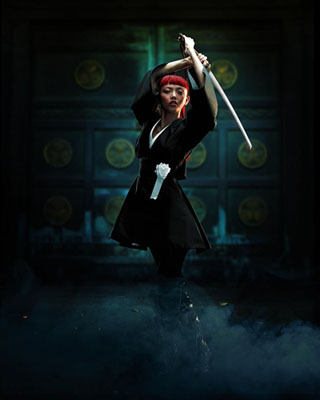 atmosphere and numerous elements of Japanese culture feature from bullet trains to love hotels. There’s also a distinctly subversive edge to having a summer blockbuster film which features a cast relatively unknown to Western audiences- it’s a risky but most welcome move.

A prologue featuring Logan as a prisoner of the Japanese in WWII, where he meets and saves the life of a young Yashida, establishes the context for everything that follows.

This isn’t just a ‘bad man does bad things let’s go hit him’ affair; the story revolves around the dynamic of the Yashida family, who are all aware of Logan to some extent due to him being the subject of numerous stories throughout the years.

Shingen (Hiroyuki Sanada) is Yashida’s son and running the Yashida company in his father’s stead and Mariko (Tao Okamoto) is Shingen’s daughter.

Mariko is engaged to be married to Noburo (Brian Tee), a marriage arranged by Yashida to strengthen the political ties of the family which Mariko is going along with not wanting to dishonour her father and then there’s Harada (Will Yun Lee) a childhood friend of Mariko’s .

Only Viper (Svetlana Khodchenkova) a mysterious mutant and doctor with her own agenda seems a little out of place in the ensemble cast.

There does seem to be a catch-22 problem for comic-derived films: if they feature too much action and not enough characterisation and story they come off as dumb and shallow, but too little action leads to accusations of being boring and slow.

Whilst there are undoubtedly those that would say the latter applies here, it’s always better to know the what and why behind a character fighting rather than just seeing them fighting and in this respect The Wolverine is unlike any of the previous X-Men films. Its more of a noir esque story, an exploration of the character’s tormented psyche, with a love story and shady individuals than it is an action oriented blockbuster.

This might prove to be a jarring or disappointing experience to those that just want to see Jackman’s Wolverine letting rip for a few hours. 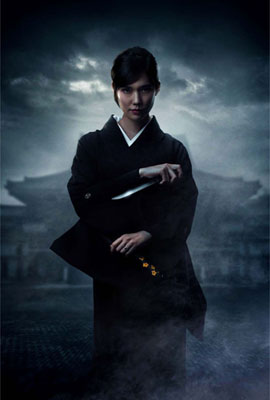 It should be made clear for anyone living in a cave for the last several years that Hugh Jackman is Wolverine, in the sense that Robert Downey Jr is Tony Stark and Ron Perlman is Hellboy. From the physicality to the attitude to the psychological fragility Jackman impresses. The Logan here is wracked by nightmares and plagued by visions of Jean Grey (Famke Janssen) Not only does this tie the film to the events of previous films in a way that doesn’t baffle or confuse viewers that might not have seen all of them but it also neatly establishes why Logan is so tortured.

Fukushima impresses as Yashida’s bodyguard and Mariko’s ‘sister’ who is clearly disliked by Shingen. Her combination of rebellious attitude ‘badass in boots’ as Logan puts it and the more traditional attire makes for a good combination and will no doubt inspire a few cosplayers. Her initial encounter with Logan in a dive bar dealing with some callous meatheads establishes her as more than capable of looking after herself.

Okamoto’s Mariko is essentially a damsel in distress but the chemistry between her and Jackman is believeable and the idea that Logan has been made out as almost a myth to her is a recurring theme . Sanada is as good as would be expected as the nefarious father figure whilst Yun Lee makes an impression as Mariko’s ‘brother’ even if their roles are somewhat perfunctory to the story.

James Mangold’s 3:10 to Yuma showed he can handle action but Walk the Line showed he can handle character drama too. The Wolverine blends the two and throws some great imagery in to the mix, especially the third act which features a great sequence in a snow covered village.

Whilst there are plotholes (but not to the point of breaking the film) and maybe the odd superfluous character, the only problems with The Wolverine are those that big fans of the Wolverine comic will pick up: the dramatic licence that has been taken with the story that inspired the film. These problems don’t really affect the film, and to those with only a passing knowledge or no knowledge of the source material won’t be noticeable, but those expecting references to things from the comics will be left wanting.

Andy Haigh started writing to counteract the brain atrophying effects of Retail Hell, now it's an addiction. Andy is an unrepentant sequential art absorbist and comics are one of his passions. Other interests include Film, Music, Science Fiction and Horror novels and quality TV like Game of Thrones. He can talk about these at great length if only someone would listen. He lives a somewhat hermit like life in The Shire, spends too much time on social media and is still waiting to go on an adventure.
More Goodness
breakingFilmFOX