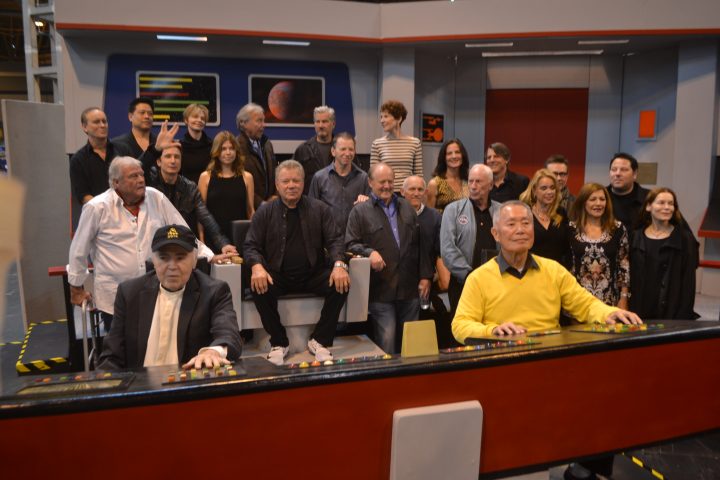 Geek Pride boldly went with a tonne of other Trekkies this weekend and sent resident Trekkie Mark Hughes (TrekkieMark) along to the NEC in Birmingham for the largest gathering of fans celebrating Star Trek’s 50th Birthday, Destination Star Trek Europe, organised by Massive Events . Here’s what we learned. 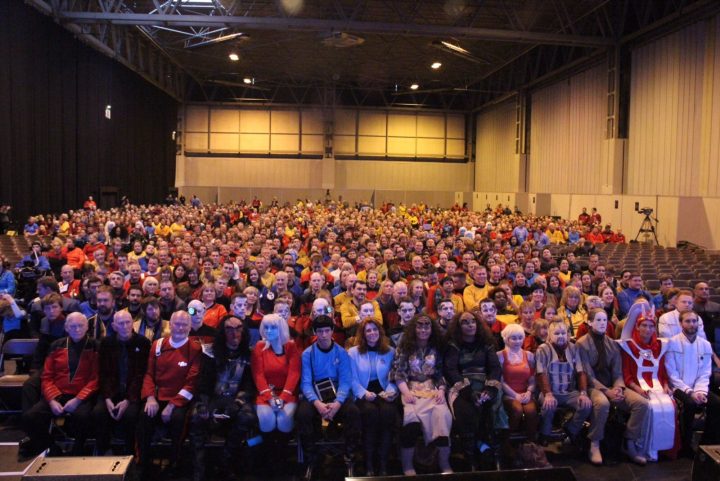 Whilst Europe lost the Ryder Cup to the American’s we can still punch above our weight when it comes having the most people in Star Trek costumes in the same room. Having taken the record off Las Vegas in 2012 in London we managed to do it again in 2016. 1,137 people bedecked in their finest Starfleet uniformed packed into the Enterprise Hall on Saturday Night and celebrated once they found out they had become record breakers. Relive the moment with our live stream. 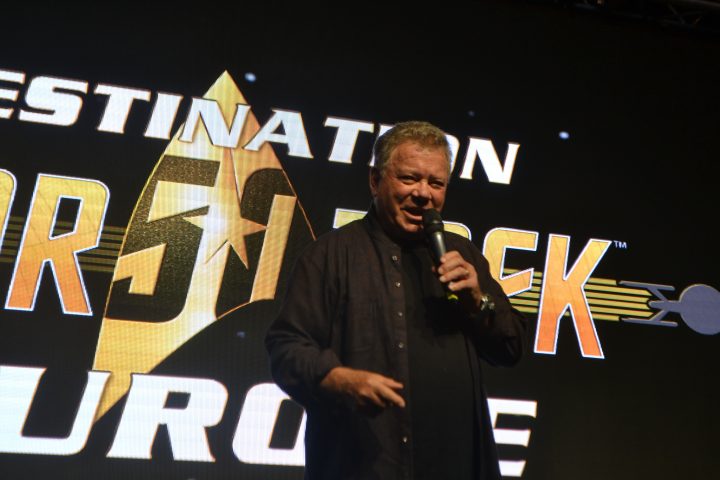 When I asked him at the talk what television shows he is watching these days Bill admitted that he hasn’t watched fictional TV in about twenty years. “I’m a news-a-holic, I watch sports, I watch nature documentaries but I don’t watch any hour long TV programmes, including Star Trek.” He also indulged the audience with his passion for science and shared a fascinating story about an encounter with physicist Stephen Hawking. “When interviewing Stephen you have to send your questions weeks in advance due to his disability. He uses a device under his eyes that helps him write out answers to questions. After filming a segment for a documentary I am making he told me that he had a question for ME! He wrote out his question, very slowly ….”What was your favourite episode of Star Trek….” Hawking is obviously a fan, as we know he’s appeared in The Next Generation.

I also managed to ask him if he was working on any more music in the future and the answer is yes and he’s working with Yes! Two former members of the prog group Billy Sherwood and Tony Kaye. Whilst he has enjoyed making albums he self mockingly admitted he can’t sing (as we already knew) and that he did enjoy speaking poetry over the music . 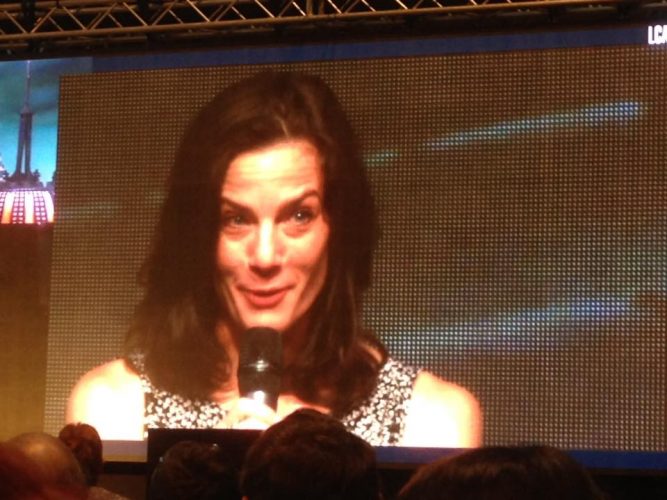 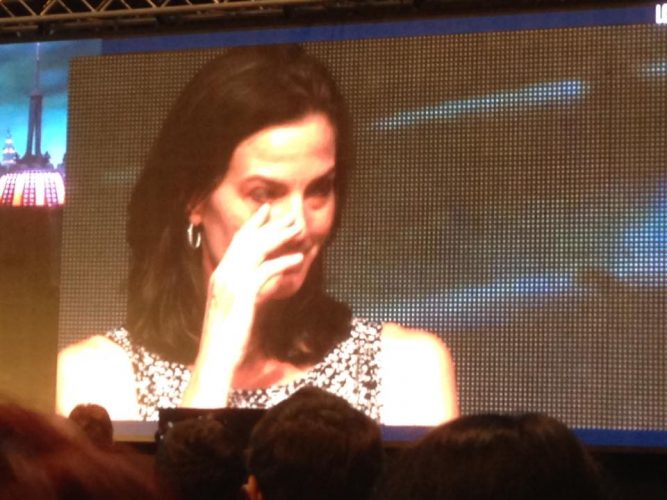 Whilst it started off as a rather light affair things took a turn for the emotional as a fan asked actress Terry Farrell who played Jadzia Dax why she left Star Trek Deep Space after only six years. Fighting back tears Farrell told us that she wanted to ease up the work load for the 7th season and be moved to the peripheral cast. However the producers would not relent and she was forced into a position where she had to leave and thus her character got killed off.  “I wanted to stay” exclaimed Farrell who also admitted that she never watched the final season of DS9. “I am Dax” as far as she was concerned. 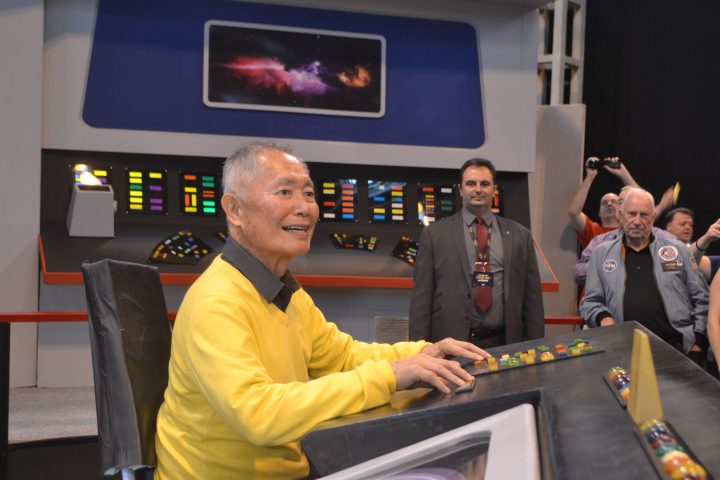 As we all know George Takei is a fearless campaigner for human rights. He shared with us the traumatic experiences of being taken to internment camps for Japanese Americans during WW2 and how they translated that experience into a Broadway musical. When I asked if Star Trek had done enough for LGBT rights he told us that he kept his sexuality a secret during his early life because it was tantamount to career suicide. “It was a non issue, as far as American society back then was concerned we didn’t exist.” He then went on to tell us that he told Gene Roddenberry, the creator of Star Trek, in strict confidence to do a story that focused on same sex relations. The resulting negative fallout in southern states due to the interracial kiss in the original series “Plato’s Stepchildren” put an end to that. 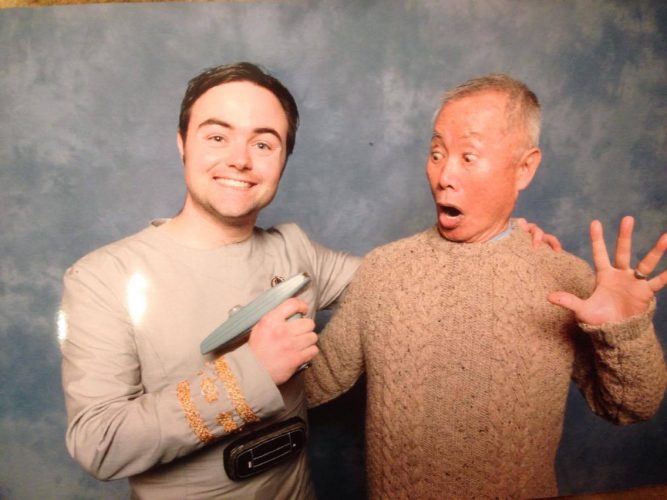 I got my professional photo taken with George later that evening. He complimented my uniform and I struck a standard pose facing towards the camera. It was only when I received my photo that I realised what he had done! Such a funny guy and a gentleman to boot.

Another personal story at the autograph table I had shared with me was with Alexander Siddig who played Dr Julian Bashir in Deep Space Nine. In my opinion I think he was one of the finest actors in the whole franchise of Star Trek and one of the best characters. I also told him that his on screen friendship with Miles O’Brian proved to me that even in the 24th Century an Englishman and an Irishman would be able to get along. He laughed and said that was the point! He went on to say that Colm Meany who played O’Brian would take him to Irish bars in LA and get him to get the drinks where they would get a little ruffled at the sound of his high English accent much to Meany’s amusement.

Appearing at the convention was veteran Apollo 15 astronaut Al Worden who really had gone where no man had gone before; he was one of the 24 men who have flown to the moon! Not only that but he holds the Guinness Record for being the most isolated man in history whilst being alone in the command module during the Apollo 15 lunar mission and the first man to make a deep space walk. Appearing on Stage with the Trek actors he told audiences the influences that shows like Star Trek had on getting people into the Maths, Science and Engineering fields that make going into the final frontier possible. He also has had television experience himself appearing on the children’s show Mr Rodger’s Neighbourhood. Here’s a clip of him showing us how his space suit worked.

At the Deep Space Nine retrospective the actors were quizzed on what other species they would rather play other than the ones they had portrayed. The unanimous response was the one with the least make up. Robert O’Reilly, who played Klingon chancellor Gowron, mentioned that if the air conditioning would breakdown on set people could squeeze the sweat from his forehead. Armin Shimmerman mused later on that whilst the make up was exasperating at times it did pay for his house! 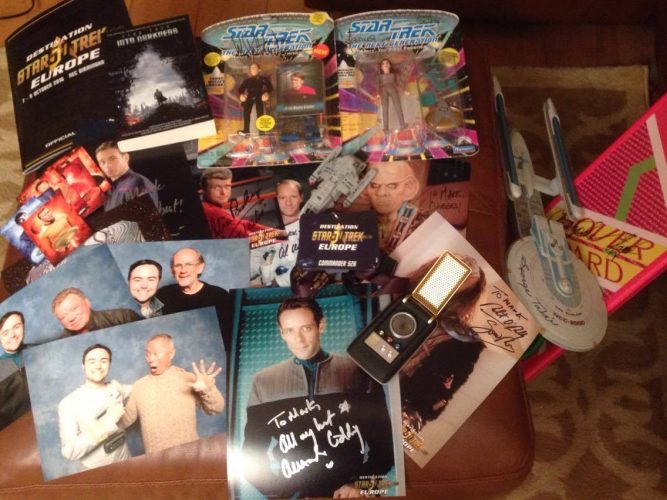 Whilst the convention was fun and we got real insights from the actors many commented that the prices of the autographs were a tad expensive in particular that of Will Shatners (£65) and Will Wheaton (£45). Lets just say I’ll be on beans on toast till Halloween. And with all these conventions there’s a lot of queuing. I myself brought over a tonne of merch to get signed including a certain remote control phaser which we will be giving away as a prize!!! Details to come soon.

One of the best things about Trek conventions is the fans. There are people who come from all around the world and there’s people you only see at these events every two years. For me its one of few times I can talk to people about Star Trek (none of my friends are into it). Whilst we were not comparing uniforms and discussing the finer points of Trek stories we were all partying and dancing at the two big parties they had organised at the Hilton. The Saturday night was a real treat with the Star Trek Rat Pack (Casey Biggs, Vaughan Armstrong, Jeffery Combs, Max Grodénchik and Armin Shimmerman) performing some rather groovy hits and Walter Koening cutting the 50th Birthday cake.  And what convention would be complete without cosplay and DSTE had its fair share. Check out some of my favourites! 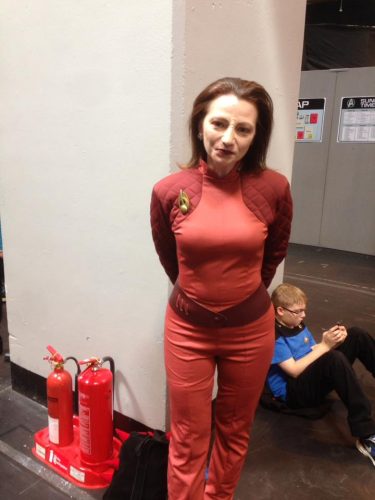 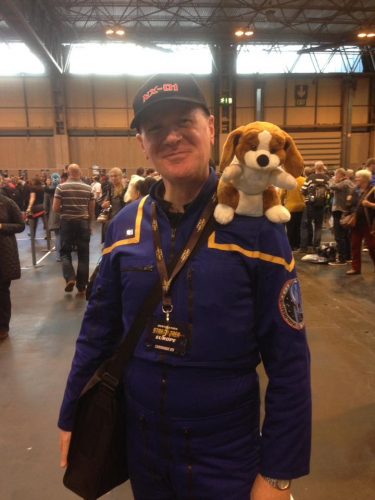 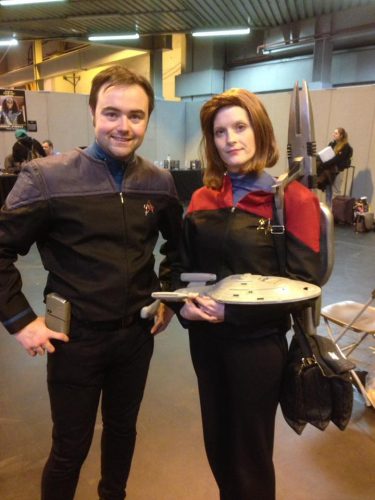 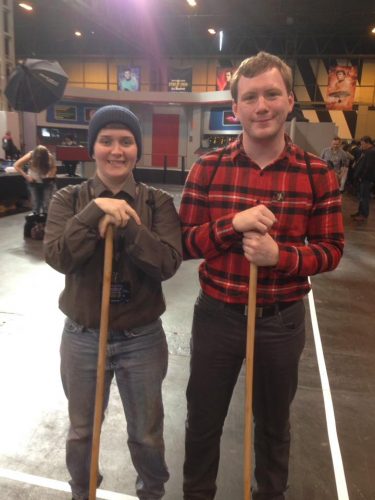 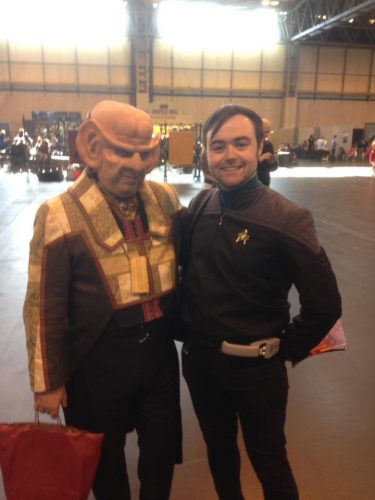 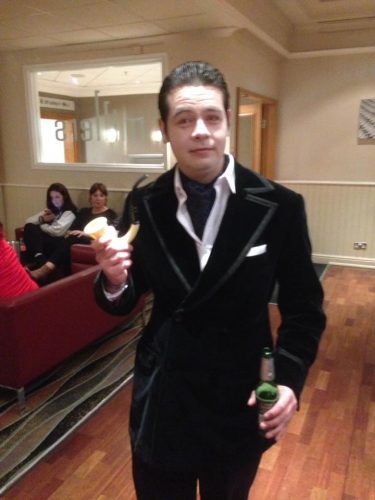 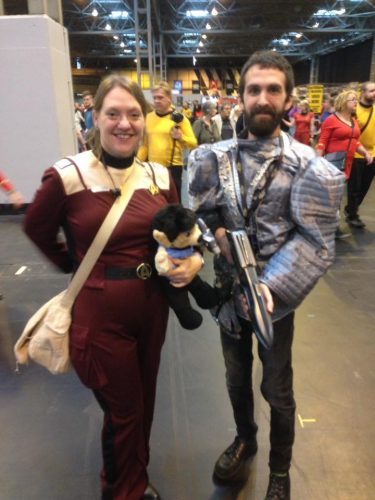 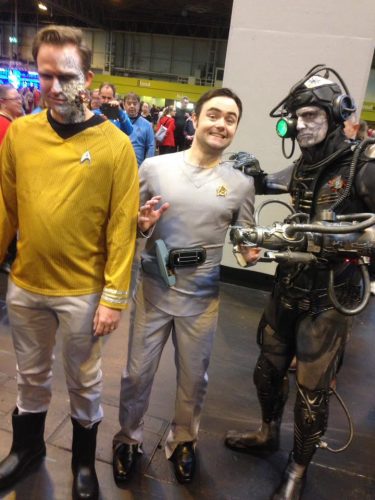 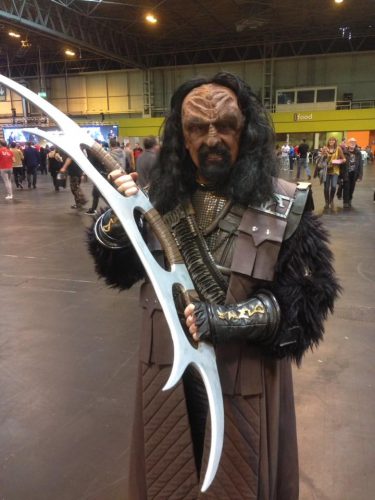 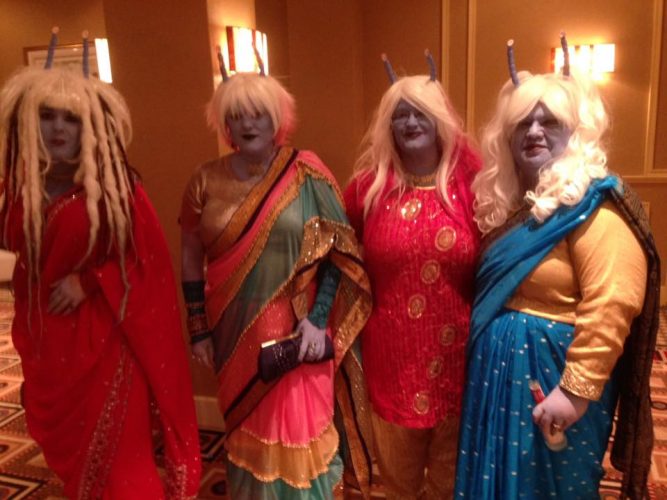 Well that was Destination Star Trek 2016. We’ve got a few more pieces coming your way from Geek Pride including our video interviews with Walter Koening (Checkov), Marina Sirtis (Troi), Garret Wang (Harry Kim) , Jeffery Combs (Weyoon) , Nicole de Boer (Ezri Dax) and Casey Biggs (Demar) as well as highlights from the press call and our Big Competition to win the Star Trek Phaser Remote Control from The Wand Company SIGNED by none other than Captain Kirk aka William Shatner. Also a big shout out to my friends Tanja and Amie who got engaged at the convention! For now Live Long and Prosper!!!

Mark lives in Belfast where he runs a ukulele club, plays board games and watches old TV shows. His interests include Cold War architecture, trawling for vintage toys on eBay and reading Starship schematics on Memory Alpha. He was a finalist on the UK version of King of the Nerds.
More Goodness
ArcherconventionDeep Space Nine