It was Jerry Seinfeld, of Seinfeld fame, who popularised the meta-concept of celebrities portraying caricatures of themselves in television and movies. John Malkovich in Being John Malkovich, Tom Jones in Mars Attacks, the entire cast of Coffee and Cigarettes and Woody Allen in everything he’s ever done being a few notable examples. Though my personal favourite has to be Bill Murray’s turn in post zombie apocalypse comedy Zombieland.

This Is The End follows the format. A group of Hollywood celeb-types get together at a debauched house party only to suffer the eponymous end of days. Hilarity certainly ensues as Jay Baruchel, here our everyman, is invited by long time pal Seth Rogen to hang out at James Franco’s place in the City of Angels. Baruchel, a Canadian, isn’t a fan of the over the top American celebrity scene, and initially we see Baruchel’s reticence at beign forced to attend the gathering. 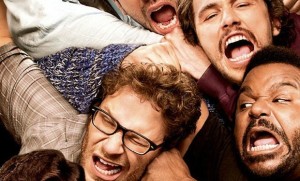 As the partying grows wilder, biblical Armageddon rages outside, complete with fire from the sky, violent earthquakes and foul hellbeasts. Franco’s palace becomes a fortress for the ensemble cast, which also includes Jonah Hill, Danny McBride and Craig Robinson. As supplies run low and tempers flare the gang are forced outside to face their fate, the extent of their friendship and whether any measure of redemption is even possible.

There’s a whole slew of celebrity cameos, as to be expected, with Emma Watson and Michael Cera ones to watch out for. There are many more, but to say too much here might spoil the comedic surprises in store for cinema goers. Written by Seth Rogen and Evan Goldberg, who collectively put on Director’s hats for the first time, they do an excellent job of parodying themselves, their careers and that of the cast. 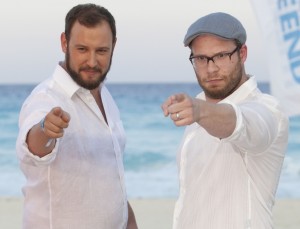 Perhaps because they seem so likable in reality, the pair have managed to create a wonderfully self-deprecating comedy which, after the failure of Movie 43 earlier this year, could have been a very different situation. Obviously it’s a pastiche of Hollywood we see, poking fun at the cult of fame, but it’s played oh so well. A tip of the hat has to go to Danny McBride, the excellent lead from Eastbound and Down, who does an incredible job of being an expert tool.

Not only is the comedy on top form but the effects work is, for the most part, seamless. There’s a welcome horror element to the film, necessary if you’re going to portray the apocalypse, with just enough slapstick gore to keep it on the right side of funny. Hell, even the soundtrack is pretty good.

Of 2013’s comedies, so far, This Is The End clearly beats such mediocre fair as Identity Thief and the third installment of the Hangover franchise to the top spot. While it can be said that This Is The End is nothing more than a series of sketches knitted together, neatly framed by the literal end of the world, it is however an instantly quotable, immensely enjoyable tale. This isn’t one for the youngsters, or even over sensitive religious types, with drug use, Christian mythology and foul language aplenty. But if you’ve seen a Rogen-Goldberg film before, and you’re a fan of their proto-slacker style, you know what to expect and you wont be left wanting.

You can view the trailer for This Is The End here.

Richie Janukowicz has been a cameraman, knight, web developer, farmer, graphic designer, telesales agent, carpenter, gardener and chef, though not necessarily in that order. He has been forced by Officers of Her Majesty to sign the Official Secrets Act. Twice. He possesses a deep and unwavering love for playing acoustic guitar, dissecting movies, reading fantasy and science fiction, superheroes (both real and imagined), martial arts and bacon. Right now he's trying to juggle a blossoming writing career with being a full time dad. He enjoys the challenge, but would like some more sleep.
More Goodness
ApocalypsebreakingEvan Goldberg