This superb brand new HISTORY documentary gets the viewer closer to Titanic than ever before. 3D cameras deliver real time images from the ocean floor… 2 and a-half miles down. This immersive 3D voyage allows us to experience Titanic as its passengers did 100 years ago.

Advanced sonar technology and 3D footage reveal startling details and give new meaning to first-hand accounts from passengers and crew. 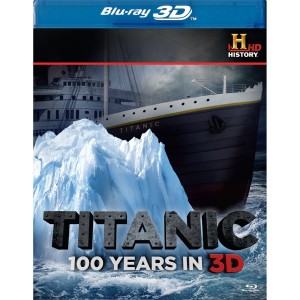 Straight to the point: Beautiful y depicted, amazingly clear and sharp pictures of the Titanic’s wreck; did you know it’s in 3D?

First off before I ‘Dive’ into the review, a caveat i you will : I’m from N.Ireland and my farther designed the Titanic Museum in Belfast  ( I know how impressive is that) Suffice to say  I have been battered with Titanic history since a young age… and I hated it! To say I was not looking forward to reviewing this DVD, was an understatement and I can’t say I’ve ever watch any of the recent Titanic documentaries on the History Chanel due to this…. BUT I powered on, stuck it in my DVD player and watched.

Stunning – Despite being told every 5 minutes it was recorded in 3D you can definitely tell the difference between it and other such documentaries, the pictures are stunning and it was eerie to see items of cloths and personal effects still sitting at the bottom of the ocean floor.

Voice actors and use of peoples memoirs – the use of voice acting (despite the dodgy Irish accents) for the passengers and the members of the crew, added a sense of reality to a subject that every school child will have been taught at some point in their lives, and gives you a sense of dread about their impending doom.

CG and Maps of the ship – the CG showed digital reconstructions of the areas the underwater probe was looking at, like the staircase and the boilers; how the ship broke up and where in the ship the people telling the story were during certain times. This game it depth and added substance to the wreck pictures.

Irish accents – Comical as always, could they not find any Irish actors to say begora or potato in an authentic  way? Didnt take away from it at all but if you can get English actors to talk in regional accents, why not an Irish one?

Didn’t learn as much as I thought I would – It seems to be more focused on the (once again) 3 D footage and less on content, which is a shame. I would have loved to have seen a bit more about its construction, about the people it picked up and more about what was on the ship itself.

A short review, for a short DVD. Ooooookkkkayyy, wasn’t as bad as I thought it was going to be, I did enjoy it, but more for the spectacle and not the historical content. I just found it really annoying that they kept trying to club me to death with the fact it was in 3D… FFS  its mentioned 6 times in the blurb at the top.. AGHHH! I KNOW ITS 3D, I CAN READ!