previous
Infographic: Every significant Bat-suit from TV, Movies & Comics
random
next
A New Perspective On The Bat Family?

The moment Gal Gadot was announced as Wonder Woman for Batman Vs Superman, the criticism began. I, like many others,

immediately pointed out that her current body shape is not the same as the iconic one we have seen in comics for years and that she needed to do some epic training to be our Amazon princess.

Gadot has finally spoken at getting the iconic role and the criticisms she has faced when it comes to her body. She was interviewed for Good Evening with Gai Pines, an entertainment show in Gadot’s homeland Israel. Batman News provided the translation for those of us that don’t speak Hebrew.

When first asked about her reaction to finding out the news she had this to say:

[quote]I was just on my way to shooting at LA. I landed at NY in a connection flight when my agent, Hadass Lichtenstein, called me. She says to me “Wonder Woman!” and I’m like “What??” – “The role is yours!…and it’s a secret and the news are not yet announced and you can’t tell anyone…”. I’m saying to her “Are you serious??”- and we both scream! Now it’s a plane from Israel to NY and I can’t make loud noise, and so I lean on a window, bending down to my legs, and just try to understand. Long story short – I was totally alone in NY, I got to a hotel at 12 pm, I needed to wake up in the morning for shootings. I remember laying in the darkness by myself, staring at the ceiling, and I was telling myself “It’s not real!”…it shouldn’t be like that, I’m supposed to be like… “where’s the champagne?”.[/quote] 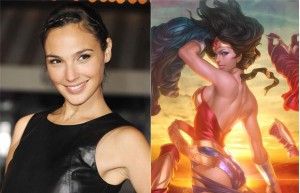 Next came the controversial topic of her boobs not quite having the same presence as Wonder Woman’s:

[quote]Hmm. I represent the Wonder Woman of the new world. Breasts… anyone can buy for 9,000 shekels and everything is fine. By the way, Wonder Woman is amazonian, and historically accurate amazonian women actually had only one breast. So, if I’d really go “by the book”…it’d be problematic.[/quote]

Okay so issues with the boobs may be a little petty but you can’t get away from the fact the Wonder Woman is visibly athletic and stronger and not a typical Hollywood shape. Well worry a little less because Gal gave us a hint of her new regime:

There we have it confirmation that the studio and Gadot are taking this some what seriously by ensuring we get our strong Amazon. Now all we need worry about is the costume and whether they are going to do Diana justice or whether she will remain in the shadow or Batman and Superman.

We’d love to know what you think? Can Gadot pull off Wonder Woman? Are Warner Bros actually going to get it right?  Share your opinions below.