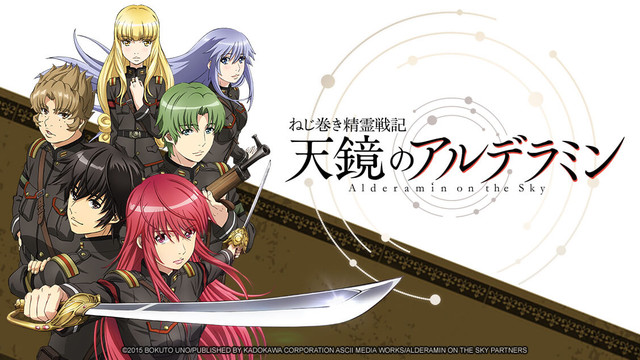 Aloha! Craig here. It’s my turn on the good ship Animeniacs, following Daniel and Lianne‘s offerings to this new series of articles.

Now, I was torn as to which anime series I wanted to talk about in this review, because there have been a few that I’ve been watching recently which have really grabbed my attention. I managed to narrow it down to either Food Wars or Alderamin on the Sky, but Lianne has told me that her next review is going to be Food Wars (excited to read that one!) so Alderamin it is!

Alderamin is a currently airing anime series which is on Crunchyroll‘s simulcast list at the moment, with new episodes every Friday. Initially, I have to say there wasn’t much appeal for me. I’m not usually a fan of military drama. However, it was described as being a fantasy setting and I had ran out of new episodes of Berserk to watch so figured I’d give it a try.

Needless to say, I was not disappointed.

Our first episode introduces our main cast of characters very nicely, including protagonist, Ikta Solork and his childhood friend Yatorishino Igsem. They’re all on their way to attend a military entrance exam via boat (Ikta wanting a nice, quiet life as a library assistant). Their boat sinks and our cast find themselves shipwrecked deep within enemy territory (there’s a war on, don’t you know!). Now, this is all well and good, but for reasons that I don’t want to spoil, one of the group is a little more than just the rank and file, shall we say.

Using Ikta’s strategic genius (one of the main focuses of the show), he and his friends manage to infiltrate their way through enemy grounds and return to their homeland to give a full report of the situation, finding themselves promoted and commended, leaving Ikta’s hopes of a cushy library job in the dust behind him.

The series has a wonderful flow to it and, with episode 13 being due for release this week, it’s still very easy to catch up with. But, we only talk about episodes 1-5 here and give first impressions, so:

The first five episodes of this series are more focused on the development and training of our team, finding their specialisations and how they bond as a unit. It feels a little slow going, but the character interaction is so rich and deep that I really didn’t mind at all as a viewer. Plus, there are plenty of dramatic and emotional developments to keep us captivated.

The characters are all wonderfully fleshed out, with Yatori and Torway both being from rival noble families and both reflecting this with their specialisations, Yatori being a literal melee machine and Torway being a top class marksman. Torway, I think, is my favourite character of this series. While he is very capable as a soldier, excelling at long range marksmanship and even developing the first sniper unit in their military, he is very humble and modest – a trait that infuriates Ikta, who sees Torway as a rival with his pretty boy looks and cool attitude.

Matthew is a very doubtful character, from a noble family still, but of lesser repute than Yatori and Torway, so this has him constantly seeking approval and recognition, and striving to better himself as a soldier. He’s very endearing and I find it easy to relate to him as a character, often out of his depth but never giving up and always trying his hardest.

Haro is our tall, shy, kind hearted medic. Naive and beautiful, she is often the target of Ikta’s shameless flirting. I think that, within these first five episodes, it is Haro and Matthew who are developed the most and have their characters grow, both finding their roles and resolve, and growing stronger as a result.

Then we have our two main characters, Ikta and Yatori, childhood friends, with episode five being flashback exposition to them as children, growing up together. It’s a very beautiful and complex relationship, told wonderfully throughout the series, but especially in this fifth episode. Yatori often refers to herself as Ikta’s right hand, with him being her left. This really symbolises their closeness.

Overall, if I had to compare this series to anything,I would say that there is a close likeness to Code Geass, only without the superpowers or giant robots. Ikta shows a lot of similarities to Lelouch Lamperouge as a character, with his tactical genius, strategic and scientific approach to situations, and the ability to face heartbreak and loss with resolve and determination. They’re both very strong protagonists who face incredible hardships.

I’m delightfully surprised at how a show which I initially dismissed as not for my tastes has absolutely pulled me in, kept me hooked and even had me in tears along with the characters at times. Definitely give Alderamin on the Sky a try if you enjoy military drama,  with a hint of fantasy and slice of life elements

Until next time, I’ve been and shall remain Craig, and I’m waiting patiently for episode 13.