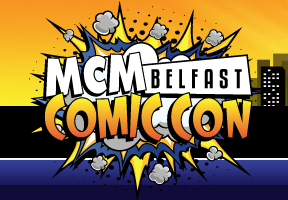 Its Saturday 10am on a typically rainy early May day, and in the leafy suburbs of South Belfast something strange seems to be happening. Amongst the usual sight of men in 4x4s nipping to the Balmoral golf club for a quick 9 holes, and women in Porsches sneaking in a quick latte before they go shopping, there appears to be a host of new additions to the local population.

By car, train and bus they come – a range of genders and ages, some of whom are dressed in various incredible and outlandish outfits…but all with a smile on their face! It can be only one thing: it’s Comic Con time!!

Now in its second year, the MCM Belfast Comic Con continues to explode in popularity, with the event (yet again being staged at the Kings Hall convention centre) being a sell-out over the course of its 2-day duration. The event’s organisers claim that around 16,000 people attended the event, breaking previous records for attendance and money generated in Northern Ireland-based film/TV/comic events.

But how does the Belfast event rank in terms of quality? 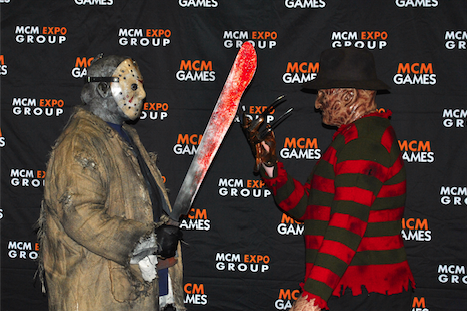 Firstly, I’ve got to say that I really like the Kings Hall Convention Centre as a hosting venue. Yes, it’s essentially just a big metal shed at the back of a crumbling, unused complex (which is in serious danger of being demolished, if reports are to be believed) – but I still think that it suits this type of event better than say the Odyssey Arena, Waterfront Hall or Titanic Belfast.  Those other venues may have a better quality of facility in terms of travel routes, restaurants and toilets – but they simply wouldn’t have the square-footage to accommodate an event of this size (it would either have to be downscaled or take place over multiple floors/rooms). Being able to walk around all of the attractions and it be on one open, self-contained level is definitely a major bonus.

Overall, the centre was well laid out, providing plenty to see and to keep attendees occupied. The queues for signings/meet and greets were very well organised, meaning that waiting times were kept to a minimum. I would also commend the staff (both MCM and the local crew) and the stall owners for their attitude – all that I interacted with were incredibly friendly and helpful (kudos on giving on rain ponchos to all that were leaving into the heavy rain on both nights – a very nice touch).

On a personal note – special thanks has to go to the MCM E-Sports booth, who had to suffer the Geek-Pride crew taking photos next to them all day (sorry for the noise!), and also the owners of the only wrestling-based stall at the event – embarrassingly I forgot to take a note of their names on the day, and a google search has been fruitless – but many thanks for the amazing El Generico and Kenta dvds!!

That said, there are a few recommendations that I would make to further improve the event facilities going forward: 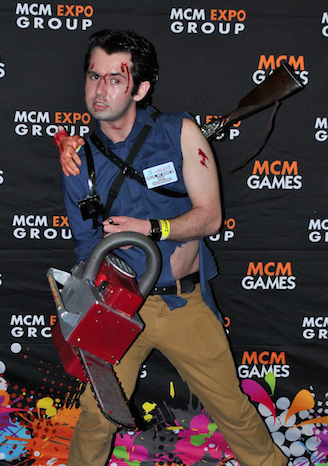 While the number of special guests had decreased this year, the quality of had certainly improved, with a genuine worldwide film/TV star attending this year, as well as an up-and-coming star from a fan-favourite TV show, and a few UK TV favourites.

The most recognisable guest was of course John Noble, the veteran Australian actor best known for his menacing performance as Denethor in the ‘Lord Of The Rings’ trilogy, as-well-as his recent forays into mainstream US Sci-fi TV in ‘Fringe’ and ‘Sleepy Hollow’.  His panel was fascinating, ranging from his love of Peter Jackson (“a truly wonderful man…a visionary!”) to anecdotes regarding Jean the Cow (Walter Bishop’s laboratory pet in ‘Fringe’ – “there were three different cows, all lovely…but they would shit everywhere”). He spoke in length about how important the role of Denethor was to his career (“a once in a lifetime experience”), but also how tricky he found the process (“I had to be very careful with the character, to research the role thoroughly, as it would’ve been so easy for him to be just a simple psychopath. But he wasn’t – he was misunderstood. He was heartbroken that he had lost one son, but blind to the fact that he was slowly losing another because of his own anger.”).

John also took time to discuss the new ‘Batman: Arkham Knight’ game, in which he provides the voice for the main villain, The Scarecrow. He described voice-acting as “long, demanding, but incredibly rewarding”, and then left the majority of the audience happy by confirming that he had seen and played the new game, and that it was “incredible”. I for one, can’t wait!

The stunning Katrina Law was another guest, and one that proved extremely popular with the younger fans in attendance during the weekend. Currently wowing audiences as Nyssa al Ghul in smash-hit superhero series ‘Arrow’, she described her training for the part of a trained assassin as “intimidating, but a challenge that I relished” and talked about her pride in playing an openly gay character in a mainstream US TV show. She finished her panel by taking a mass selfie with herself and the audience, confirming that Nyssa will return in the next series of ‘Arrow’ and announcing that she was about to fulfil a life-long fantasy by visiting the Giant’s Causeway.

Other guests included Danny John-Jules of ‘Red Dwarf’ fame – who discussed his time in the famed sci-fi comedy show (“It’s coming back!”), as well as describing ‘Maid Marion and Her Merry Men’ as a forgotten British TV masterpiece; animation voice-talent superstar Hynden Walch – voice of Princess Bubblegum in ‘Adventure Time’ and Starfire in ‘Teen Titans’ – who’s booth had a queue of teenage girls so long, you would have thought it was One Direction doing a signing; and the comically out-of-place Shane Richie and Jessie Wallace (Alfie Moon and Kat Slater from ‘Eastenders’). Why the organizers thought that having these two attend a geek/sci-fi/comic event was a good idea, is beyond me – but at least they seemed to be genuinely appreciative of the warm welcome that they received from the Belfast crowd.

The Comic Village also made a welcome return with a range of well respected comic-book artists in attendance to interact with fans, provide custom sketches/art and even provide guidance on the fan’s own art. Of particular note were the beautiful Anime-like stylings of DestinyBlue, and local comic heroes John McCrea (Judge Dredd, Preacher, The Boys) and P.J. Holden (2000AD, Warhammer). 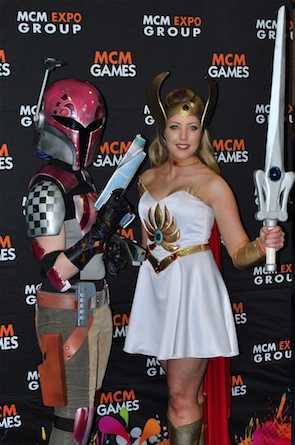 As was the case last year, there was an amazing range of attendees at the event – from babies dressed in Spider-Man baby-grows to pensioners in 1980s Dr. Who t-shirts, the one thing that you could never accuse fans of the ‘geek’ genre of being, is one dimensional.

There is always such vibrancy about Comic Con events – you never know what characters you’re going to spot as you make the rounds. One minute there’s a massive custom-built Hulk lumbering around with a load of kids chasing in its wake attempting to get a photo, the next the next there’s a gender-swop Joker/Harley-Quinn-dressed couple discussing which superhero-themed belt buckle they wanted to buy.

Cosplayers were out in force, with a ton of incredible costumes on show. All were happy to stop and pose for photos when requested, not only from the various press/bloggers in attendance, but also from the normal fans who just wanted to congratulate them on a job well-done and to grab a selfie.

The most popular cosplay outfits seemed to be Oliver McQueen/Green Arrow (‘Arrow’), Deathstroke, Link (Legend Of Zelda), Harley-Quinn and various characters from ‘Attack On Titan’ – but there were a multitude of other well-known characters. My personal favourites included a pair of young siblings (they must have been around 7-8 years old) whose mother had constructed amazing outfits for each – one was a Predator, the other an ‘Alien’ Xenomorph; a full-sized Ninja Turtle in the style of the original 90’s movie; and an Ace Ventura who remained in character during the whole day (complete with the strutting walk), and who had a multitude of props on hand for photo opportunities.

It was encouraging to see so many families in attendance, and that so many young children were able to take part in all of the attractions available. Here’s hoping that events such as this (along with the current success of the superhero genre) implant an interest in the younger fans that will grow as they get older, exposing them to new characters and genres. 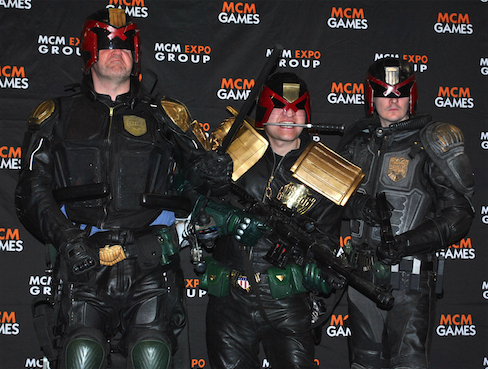 In conclusion, I’m more than happy to report that this year’s MCM Belfast Comic Con was a rousing success. While the event itself is still building momentum, and there are definitely subtle changes that can be made by the event organisers to improve the overall experience for attendees – there is most certainly a market in Northern Ireland for this type of event.

With each year that it is staged, the word of mouth and publicity around the event will improve – this will in-turn lead to an increase in range of facilities/stalls/attractions available for fans, the quality and amount of guest stars will considerably improve (please, let’s never have another Shane Richie fiasco!), and of course the potential audience will multiply.