I was once a proud PS3/4 trophy hunter. So glorious were my achievements that I was featured as “Mr Trophy Hunter” in PSM3 UK’s Aug. 2012 issue. My life changed after I bought the New MH4U 3DS XL at launch. I had played the entire Monster Hunter series before and knew how addictive it was. Yet, I was confident MH4U would not enthrall me so much. How wrong I was!

So I created my character (who looked like a king), chose my starting weapon (Greatsword), and burned through the low rank village quests. I took my time upgrading weapons and making whatever peice of armour was better than the last with no regards to full sets. I got friendly with my palicos which were there for aesthetic purposes. 15 hrs went by in a flash.

Boredom sank in. I decided to check out online play. Keen to show off my skills, I joined some gathering hall, and all of a sudden, I was fighting this gargantuan spider called a “Nerscylla”.

It was intense, but very enjoyable with the other hunters there. I pulled no punches and didn’t die, I ended up getting some tantalizing spidey parts. Awesome! They seemed to enjoy having a proficient hunter around that didn’t cart (die) all the time, so they begged me to stay for their next mission. With my ego stroked, I relented.

Before I knew it, I was on a  wafting rock in a thunderstorm. There’s this massive hideous thunder rock dragon creature that took a huge chunk of my health, so I kept my distance and hit it when there’s an opening. We won, and I acquired more monster materials. Woot!

My friendly team told me that I should get a full set of the same armour, which I had no idea was useful. They recommend a full Tetsacubra set. We farmed him a bunch of times, and lo and behold, I had my first full set! My triumph was superficial as the addiction got worse. Like a famished Tigrex, I craved for more. (GROWL!)

“Hunt, get loot, hunt for better loot”. It was a familiar tale. I juggled between solo and online play. Time elapsed seamlessly. I had meals at irregular times (at least, I didn’t eat raw meat), I did bathe though (didn’t want my stench to repulse monsters, I got stink bombs for that).

My social life consisted of talking to monster hunters online. I made a lot of cyber friends while losing a few real ones. Due to my competency, I even created a reputation which did no favors to my already-inflated ego.

It took me over 100 hrs before I made it to the G-rank hall in Dundorma. I stood in awe of his “immenseness”, a giant king with a high forehead. He gave out blank scrolls to me which are filled up with strange symbols by completing quests.

With the addition of Apex monsters, the G-rank quests were harder than the others. You needed wystones to survive them, and the way to obtain them is to complete more solo and online quests. Tough as they are, it was nothing a decent group can’t handle.

So I have done all the low, high, and G-rank quests. It’s over right? I’m finally freed from MH4U bondage, right? WRONG! It was only the beginning! There were guild quests to get the elusive relic weapons, and my loot fetish only made my addiction worse.

Even with a strong armour set, the beasts found in lvl 140 guild quests could kill you in a few hits. The drop rates for the ultimate relic weapon were abysmal as well. After witnessing countless deaths, increasing my blood pressure with verbal curses, a month of consistent farming, I finally found…a powerful relic Greatsword. It wasn’t the best, but it was pretty good.

My joy at being liberated was short-lived, however. My loot proclivity may have diminished, but the game fed on my trophy hunting ways with its own varied achievements. Some were easy while others were very time-consuming (getting all 60 monsters of a small size)

As it stands, I’m still trying to get all of em! My PS3 n’ 4, Xbone, Wii-U, are all collecting dust as we speak. What’s worse, I’m bed-ridden for all the wrong reasons. Meals are being served on a tray by my royal maid, I NEED HELP! 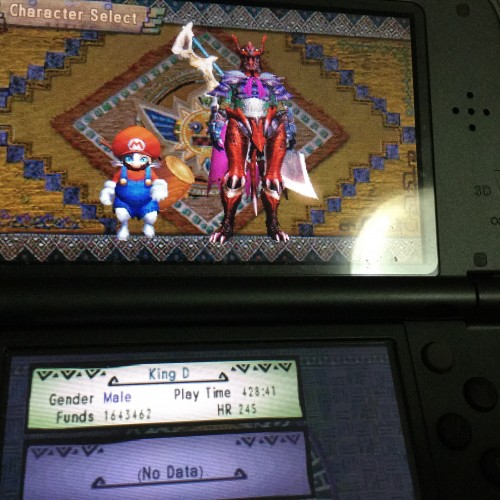