Soon after Improper Books announced the launch of their silent comics: Butterfly Gate and Knight&Dragon, the news of another original story came out. It seems like Benjamin Read and Chris Wildgoose, alongside Jordan Boyd and Jim Campbell are ready to bring yet another dark tale to the table – Briar – focusing on European myth and its folklore. We’re still a few months away from its release, in early 2014, but by the looks of things, it’s going to cause quite a splash. I don’t know about you, but I am excited. 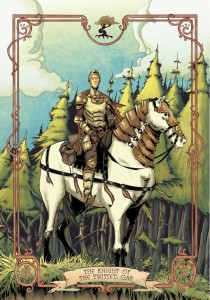 Written by Benjamin Read and illustrated by Chris Wildgoose, with colours by Jordan Boyd and lettering by Jim Campbell, BRIAR follows the story of the cursed Princess Layka, and Kaye, The Knight of Thorns, who searches for a way to break the curse and set her free.

Cursed by the shadow-sorcerer, Celik, Layka is trapped behind an impassable wall of enchanted briar, and seeks an end to the magic that keeps her shut off from the world. Trapped for years behind the living wall of the briar, she awaits her one true knight, Kaye, who has been tasked with the quest to break the curse and set her free.

Inspired by European myth and folklore, Briar is an episodic series of nested stories woven into the fabric of Layka and Kaye’s ceaseless quest.

About his illustration for Briar, Chris said, ‘We also wanted to push the boat out art-wise, so we’ve gone incredibly detailed with all the interior artwork. Storytelling is paramount, but I’ve tried to go as intricate with the art as Ben’s tale. I’m also so excited to have Jordan Boyd on colours with us. He gets what we’re aiming for and brings a whole other life to my inks.’

‘Briar is one of the books I’ve always wanted to write,’ said Benjamin Read. ‘Set against a background of eastern European folklore, it’s a Russian doll of nested stories, wearing a coat of fairy tales but subverting every trope within them.’

A limited UK indie edition of Briar is scheduled for release in 2014.

A free colour preview of the first part of Briar will be available at the THOUGHT BUBBLE COMIC CON 2013 from the Improper Books tables. You can find us in NEW DOCK HALL, tables 51-53. Copies of the free preview will also be available from supporting retailers. 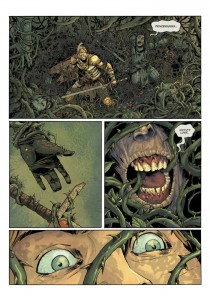 What's there to say about me? I love the sci-fi and fantasy genre when I read, but I am in no way limited to that alone. I do think Frank Herbert deserves a statue for his writing(if there is one, point me in that direction, please). I enjoy writing quite a lot, but I am also kinda lazy. If you want to make me happy give me books or Doctor Who collectibles. Or a real TARDIS, in which case I will love you forever.
You might also like
benjamin readbreakingbriar