The news of Facebook buying Oculus VR has led to a massive storm of controversy. Isometrics looks at the history of VR and asks what it is that is so powerful about the concept…

Welcome to Isometrics, the Visually Radient cybercolumn about the literary world of computer and video games, and this week we dust off the power gloves and cybergoggles as we take a look at Virtual Reality as it was, as it is and how Facebook thinks it can be in the future, all the while poking at those little literary implications we love so much, and seeing if this collective pipe dream can ever really be our nightmarish dystopian future while the world caves in on itself. And on that delightful note of optimism, let’s begin our exploration of virtual reality by talking about the theatre.

I’ve mentioned in a previous article [link here] when discussing the nature of literary gaming that works of experimental literature actually had a place in the lineage of video games before there was enough computer technology to render a noughts and crosses game, and the same is true of virtual reality and the theatrical space. The term itself can be traced back to the 1930s as the way in which playwright, poet, actor and director Antonin Artaud describes theatre as the link between the real world and the purely illusionary phantasmal world of the alchemic. The principles behind it and the applications in both the artistic and utilitarian world can be traced back as far as the mid 19th century, with 360 panoramic murals giving the impression to onlookers of a virtual reality. Running parallel to this as well was the early advent of simulators, particularly the early hydraulic-based flight simulators, which despite lacking screens or really any visual feedback, with the cockpit covered gave a fairly accurate (for the 1920s) simulation of flying via instruments, if for example you were flying at night in unfamiliar territory. 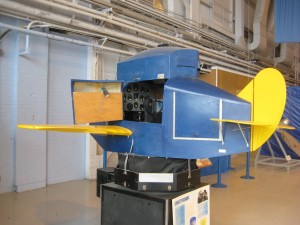 As ambitious and interesting as some of these early solutions were hampered very heavily by technology. Without some kind of digital output, these ambitious devices were always going to struggle. The Sensorama, Morton Heilig’s prototypical VR cinema device is a case in point. The theory behind it was very ambitious, that not only could it provide stereoscopic 3D (at a time when a lot of filmmakers were struggling to work with anaglyph 3D) but could also simulate smell and even the wind blowing through your hair. The problems were all fairly readily apparent though, not only was astonishingly expensive for the time (A steal at $1.5 Million, worth nearly $12 million today), but also was a very limited concept. It could do one film just fine, but in order to do another film almost all the components had to be replaced, making it far from cost effective, which probably was the thing that put the nail in the coffin of pretty much all VR up until the advent of computer graphics technology, around the mid 1970s. 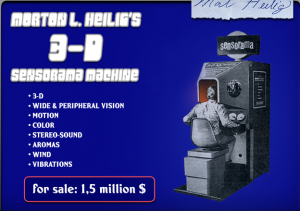 So it’s this, or a small island nation… Tricky one

Once computers were involved however, VR stopped being something that could only exist to ruin people’s lives in sci-fi short stories and became something that ruined people’s eyes in real life. There were so many attempt and interpretations of VR that it’s hard to get them all down here, but you had holograph domes (which were nowhere near as impressive as they sound), rooms with multiple screens like in Flight Simulators and of course the good old head mounted display, which brought such amazing masterpieces of technology as Nintendo’s Virtual Boy. 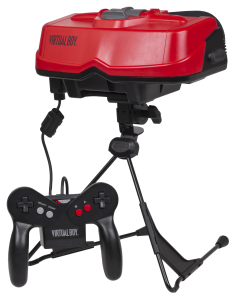 Ladies and Gentlemen, THE FUTURE!

In all seriousness, there were a ton of attempts to bring some form of VR or 3D technology to games, but without enough technology to pull it off they almost never worked, and almost always hurt to try and use, with the risk of permanent eye damage putting off more than a few prospective buyers. Despite this (or perhaps because of), VR was a cultural phenomenon, and pretty much everyone in the late 80s and most of the 90s tried to capitalise on the concept, some of which I will have to expunge on in later articles, as it made cyberpunk and video games as they were in the 1990s, the forefront of youth counterculture.

Asking whether the rapid improvements in 3D acceleration, head tracking, graphical fidelity and everything else that makes VR possible actually killed it as a cultural phenomenon is kind of a chicken and egg question. VR as a cultural thing kind of disappeared for about a decade after the release of the Matrix, a film that suggested the descent into a virtual reality might not be quite the amazing fantasy of light and colour as we thought, and interest slowly tapered off.

It’s safe to say that the Oculus Rift, the VR headset brought to you by the donations of giddily excited Kickstarter donators likely helped bring back the idea of VR one more time. By this point, it was 2013, and motion tracking, head tracking, graphical fidelity and sheer processing power had all been massively improved, and the Rift really has impressed a lot of people that have seen it either with the development kit or at trade shows for genuinely providing a level of immersion that other VR tech aimed at home users simply hasn’t had the processing grunt to, to the point that Sony, when debuting a competing VR headset currently known as Project Morpheus explored the effect Oculus has had on modern VR and effectively made the cyberpunk dream come to fruition. 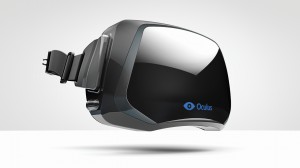 Man, imagine the ads you could watch with this!

Then of course Facebook bought the rights and turned it into a nightmare.

Now, it has only been a small amount of time since the big announcement that Facebook purchased Oculus VR for $2 Billion, but the reaction has been so very hostile. Nobody outside of shareholders wanted to see this indie start-up with a fantastic bit of kit paid for by the Kickstarter faithful be poached by a social media giant of increasingly questionable ethics, particularly when Facebook themselves struggle to offer any concessions or assurances that their involvement will not affect the release of the Rift, and indeed has already affected its relationship with the gaming world.

The logic behind the announcement, at least as Facebook dressed it, actually confused me at first, given that the main stories behind the Rift is its success at making VR a legitimate option for playing games. But given some of the other tech demos that have gone around, including a massive VR cinema, there’s something to be said for claims it could be the future of social media.

The problem comes from the fact that it’s Facebook.

Facebook, they of the intrusive ads, the questionable usage of the reach and feed systems to generate ad revenue, they are simply not suitable caretakers for virtual reality, be it in gaming or in wider uses. The potential for things to go wrong are so great, that no developer will risk it, which lead of course to Notch’s pretty immediate reaction of cancelling a potential Oculus version of hit game Minecraft. 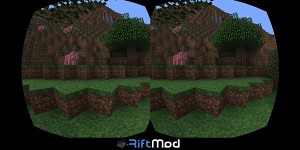 And Facebook, which is dealing with declining revenue and brought out a bunch of questionable tactics in order to address this, isn’t exactly in this for the potential of VR and to see what can be done with the technology, but to see how it can expand a Google-esque technological empire, and have the pleasure of having technology that can put adverts right into the user’s face.

So how awful will the Facebook feed look in virtual reality? Is there any actual positives to the Facebook takeover? If you have any comments leave them in the wonderful thread below, on the Geek Pride Google + Page or on Twitter, either through Geek Pride or Myself.