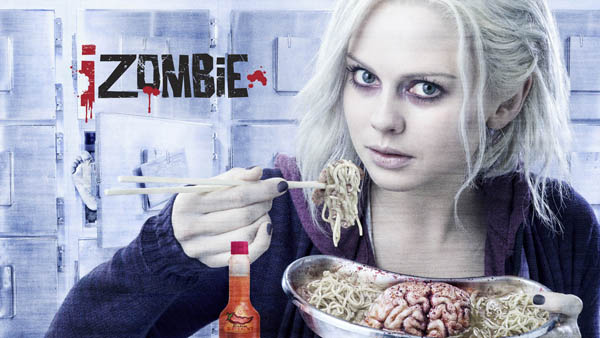 The latest in the seemingly endless production line of TV shows based on comics, iZombie is the new venture from Veronica Mars creator Rob Thomas with co developer Diane Ruggiero-Wright .

The story revolves around Olivia or “Liv” Moore (played by Rose McIver) a medical resident who after a fateful experience on a boat party is now a zombie and needs brains, a side effect of the whole zombie thing. Liv is the assistant of Coroner Ravi (played by Rahul Kohli) who soon discovers her secret, realising a body she dealt with was a little light in the brains department. Rather than freaking out though he is intrigued and Liv is relieved to find someone she can share her secret with.

Clive (played by Malcolm Goodwin) is a police detective newly-transferred from vice to homicide who ends up using Liv to help out solving cases after he and Ravi discover she is “psychic-ish” retaining some of the memories from the brains she eats.

iZombie is completely different to that other TV series which features zombies, although if you’re sick of the whole zombie thing in general that won’t make much difference. The core aspect at the heart of iZombie is what happens to Liv’s perfect life with the great fiancé, awesome roommate, job she loves and the loving family when she wakes up as a zombie.

As if it needed saying this bares little resemblance to the rather excellent, quirky comic it’s based on by Chris Roberson and Michael Allred,having more in common with Diana Rowland’s White Trash Zombie novels.

Despite having very little in common with its source material iZombie somewhat contradictorily also seeks to constantly remind viewers of its comic origins with the excellent title sequence featuring art from original comic artist Allred that rapidly explains the story behind Liv’s condition (shame about the music mind) and scenes opening up with comic panel framing and caption boxes. 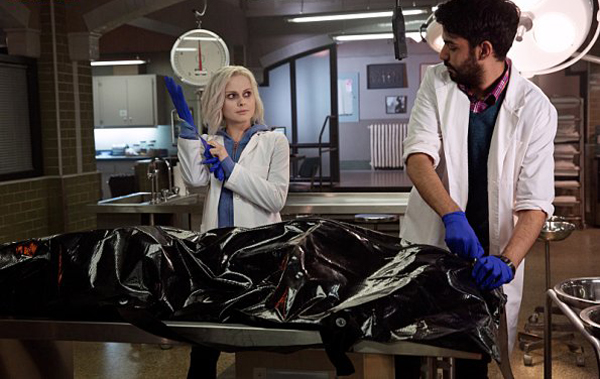 Whilst these touches are great and give things a quirky vibe, everything else about it falls unfortunately flat with a resounding thud. By far the worst aspect of iZombie is it tries too hard to be witty. Maybe it’s because I’m way outside iZombie‘s target demographic but the  dialogue between characters doesn’t seem even remotely natural. This isn’t because of the delivery, McIver is actually great as Liv, but more because  the writing tries so hard to be witty and just utterly fails. This is so blatant that you almost expect a flashing “LAUGH NOW” sign to pop up constantly to prompt you and remind you this is supposed to be funny, like, hilarious because they’re being so damn witty.

Whilst Goodwin’s police detective, in a refreshing change to the norm, isn’t either a) a dysfunctional drunk with a broken marriage or b) a strapping alpha male hunk/love interest any dramatic narrative is torpedoed by how disengaging the “witty” dialogue is and how much of it there is. The main character’s name is Liv Moore, get it? That is a worrying demonstration of the level we’re operating at.

Things might improve over time but as first episodes go iZombie is a flatlining corpse.