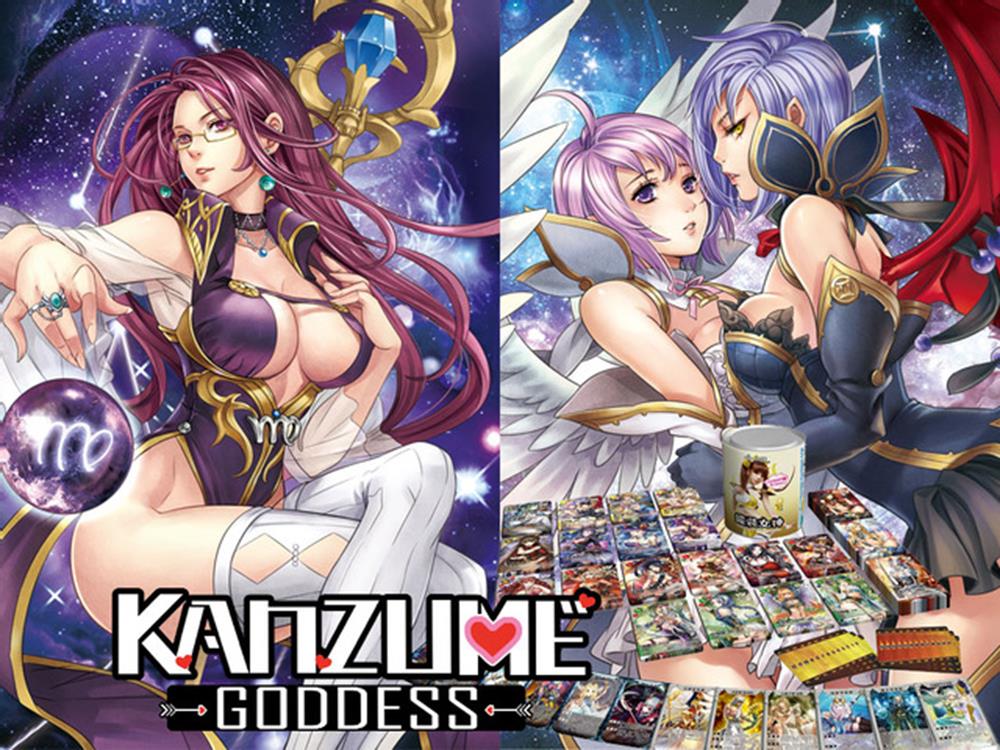 Right, so it’s not often I come across a game I can say I didn’t enjoy on some level. I don’t know whether I’ve just been lucky, hung about with a discerning crowd of gamers who only bought the best or that I just have low standards (not blinking likely!). So when Kanzume Goddess turned up, I got a pretty nasty shock. It looked like it ticked all the boxes: deck-builder archetype, cool manga style artwork, compact design with high production values. So why did Kanzume Goddess fall flat?

The premise is you play a god/goddess from either Greek or Norse mythology, represented by a player card with its own special abilities. Players then get a deck of basic Disciples and Sacred Guardian cards. The former generate Faith, which is the resource used to buy more powerful cards whilst the Sacred Guardians allow a player to defend themselves from damage and negate the abilities of opponent’s God cards.

The rest of the cards in the tin are Warrior cards. These are arranged into six random decks in the middle of the table, and have more powerful abilities than the basic cards each player starts with. As mentioned, Faith points are used to buy these Warrior cards, which then go onto top of your own deck. Like most deck builders, the plan is to buy better and better cards each turn to improve your own deck as you strive to put together stronger hands each round. At the end of each round, players discard their hand and draw from their deck, recycling their discard pile if they can’t draw a full one.

So what’s the point? Well, winning is accomplished by either killing all the other players off or reaching 25 Energy (essentially life points). This is done by either attacking your opponents directly using your newly purchased Warrior cards or healing yourself with them, depending on whatever abilities they have. Others will have defensive abilities, which either directly block damage from attacking Warriors (hence why players draw a new hand of cards at the end of their turn) or negate certain abilities.

To make things interesting KG features a combo chaining mechanic, where Warrior cards have three coloured dots printed in their top left corner. The largest is the card’s colour (Warriors that Attack tend to be red for example, whilst healers are often yellow). The two smaller dots denote what colour card is allowed to follow. In theory this creates a strategy to what cards you need to buy to make sure you can play correctly in some thunderstorm of card draw, super attacks and smug 10-card ultra-combo of deck emptying awesomeness!

In practice, it’s actually a boring struggle to get the right cards at the right time. Even when you do, the majority of the occasions every other player can either defend the damage, or just heal up in their own turn. To make it even duller, many of the cards will only allow you to draw a single additional card, in theory just replacing itself in your hand and only being playable if you are lucky enough to have the right coloured dots on it. Instead of being clever, it’s just restrictive and few of the cards make good use of what cards have been played already in a turn. Suffice it to say, KG has hit the table several times in our house and every time has out stayed it’s welcome as the game grinds down into a ‘I hit you’ ‘I defend most of it’ ‘OK, your turn’ ‘I heal back up, then hit you’ ‘Fine, I defend all of the damage’, rinse, lather, repeat.

Remember those God cards? Well, each player gets one with their own special abilities; these powers can be played as often as the cost can be paid. It sounds like a fantastic way to make each game different and improve the replayability of KG. The reality is the Gods are woefully unbalanced, and I don’t think KG has been playtested extensively enough to compare all situations between all the potential card combinations. Some Gods just blast the others to pieces before they can get any traction, whilst others just extend the game into a tedious tit-for-tat of minor damage and healing.

The artwork and component quality are the only place where KG really shines. The artwork is amazing, if you can handle a gratuitous amount of cleavage. Manga-esque fan service is very much in full swing here, as all the Warrior cards are female with varying amounts of preposterous endowments and flesh on display. This aside, each is beautifully drawn and coloured and the cards don’t look horrendously cluttered with symbols so the graphic design has been handled well. The text is very small however, which can cause detraction during game play as players are forced to pick up and peer closely at each new card as it is revealed.

The rulebook leaflet is decently written; we had no trouble getting going without numerous references back. There are also some interesting variants such as team play which can add a little back to the flat nature of the game, but at the risk of introducing alpha gamer syndrome into an already lacklustre game.

So in summary, the game looks and feels like it should be great with some cracking ideas for mechanics. In practice however, it’s a slow, dull grinding affair where the mechanics act against the enjoyment of the game. Between this and the unbalanced God cards the whole experience is one of style over substance, and I have a sneaky suspicion that play-testing was not high on the agenda when Kanzume Goddess was designed.