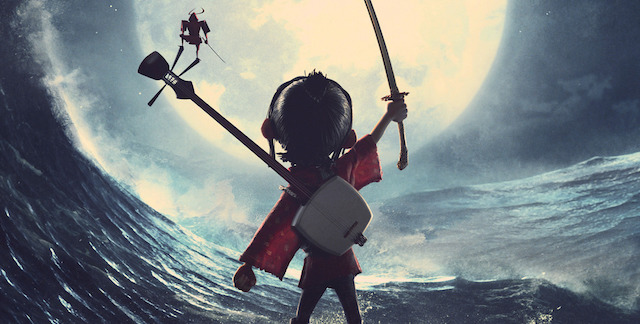 Yesterday saw the release of the trailer for the next film from Laika, the stop-motion studio responsible for two of my favourite animated films Coraline and ParaNorman. A teaser trailer was previously released for the film back in December, but it lacked spoken dialogue and so kept the plot of the film relatively secret. With the updated trailer, we have a better idea of what the film will be about. Additionally, the musical score that goes throughout the trailer is a shamisen cover of the Beatles song “While My Guitar Gently Weeps”.

Kubo will be the directorial debut of Laika CEO Travis Knight, who has experience working as an animator at the studio, and features a voice talents of Art Parkinson (Game of Thrones), Charlize Theron (Mad Max Fury Road), Ralph Fiennes (Spectre), Rooney Mara (Carol), George Takei (Star Trek The Original Series), and Matthew McConaughey (Interstellar). The plot revolves around Kubo, the son of a legendary samurai, who inherits his mother’s shamisen and through it is able to use magic – pursued by vengeful spirits and monsters, Kubo seeks to find the armour of his father so he can survive.

Laika films have always done well at the box office, and have been always well-received by critics – they have also accumulated a number of awards for their work, from Academy Awards to BAFTAs – and most of the awards revolve around the genre ‘stop-motion’. Awards which are richly deserved, as the animation is always of high quality and is such a joy to watch.

Kubo and the Two Strings is set for an August US release, and arrives in UK cinemas on the 9th of September 2016.