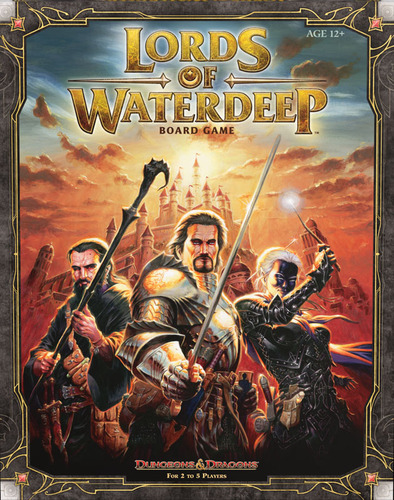 Straight to the point – Simple game play coupled with numerous actions and strategies, LoW delivers euro game style board-gaming in the D&D universe in a focussed and elegant package.

Winner of the 2013 Origins Award for Best Board Game, Lords of Waterdeep is based in the D&D universe of Forgotten Realms. Unlike it’s roleplaying pedigree, LoW is pure euro board game, combining resource management and points scoring to bring about accessible strategy: in short, anyone can play but practice is needed to become a master.

Firstly, the gameplay. Each player is given a sect to represent them in the city, which boils down to a set of colour pieces representing your agents as they travel the city. Each player is also given a random ‘Lord’ which they keep secret; this Lord will have text that tells the player how they can score bonus victory points at the end of the game depending on the choices they make. This is a bit of a double-edged sword; whilst having a random Lord dealt at the beginning of each game adds variety, it does tend to ‘dictate’ a player’s play style as they strive to complete those Quests or actions that gain them the bonus points.

The city itself is the playing board, with a selection of different locations that each player can send their agents to each turn. Some locations allow you to recruit (these recruits are either fighters, clerics, rogues or wizards, and are represented by different coloured cubes), some will allow you to draw new ‘Intrigue’ cards or play ones you have already drawn, whilst other locations allow you to gather new Quests. There are even locations that allow you to gather gold, whilst another allows you to buy buildings. The twist here is that once a location has an agent in it, no other players (including the one who owns the agent) can visit this location again this turn. In effect, each location is a one off, forcing players to think ahead; do I recruit some fighters now or hope it’ll still be available in my next go this turn?

As mentioned before, one location allows you to build new buildings in the city. Buildings are effectively new locations that any player can visit with their own weird and wonderful effects. The kicker is, when someone visits a building they don’t own, the owner also gets a little bonus (usually a recruit or a little gold). Buildings can therefore be very lucrative!

So what’s all the recruiting and Intrigue and gold for? Well, each player has Quests (insert Monty Python reference here!) that they must complete in order to gain victory points. These come in five flavours: Commerce, Warfare, Piety, Arcana and

Skullduggery. Each will have a set of requirements you must fulfill to complete them (for example, you need to have recruited 4 rogues, 2 wizards and pay 2 gold to complete the Skullduggery Quest ‘Prison Break’). The reward for completing them is usually victory points, however some have additional benefits (‘Prison Break’ gives 14 victory points, recruits you two new fighters and allows you to pay an Intrigue card for free. Very tasty!).

Confused? Don’t worry, so was I at first! Now it’s one of my favourite games in my collection. The cards have simple designs and numerous reminders. The board is straight forward and clear, making decisions easy and not requiring numerous references to the rule book. Of the ten or so people I’ve played with, all had it down pat within the first two turns, and each have asked to play second and third games every time!

This brings me on to gameplay. Each turn consists of players sending their agents to locations on the board one at a time, going round the players until everyone has placed all their agents. Every time an agent is played, you gain the bonuses of the chosen location and the option to complete one of your missions. Player downtime is low, as each player only gets to play one agent at a time, and everyone is constantly watching everyone else, checking that the location they want next time is still available (cue much sighing and head holding as someone sneaks in and recruits that cleric you wanted!). In addition, the game has a set number of turns, meaning playtime is more predictable at around 60 minutes; the game even adjusts itself depending on the number of players, giving smaller games with 2 or 3 players more agents to use each turn for example. The rule book is well written and clear, with expansions on some of the trickier concepts, such as some of the buildings, just in case further clarification is needed. This demonstrates the level of thought and play-testing that has gone into LoW, giving the feeling of polish;  all the elements of this game have been honed and work together in cohesion, with no jarring mechanics or bizarre rulings for obscure situations that only come up once in a blue moon. Replayability is therefore massive for this game.

The game even boasts a strong theme and design. The D&D universe is always going to provide plenty of fluff for a game theme, and LoW takes those elements most recognised (taverns and the classic character classes) and uses them in style! The artwork and box design are also excellent. The illustrations are crisp and colourful with the ‘epic’ look you expect from a D&D theme. The box is designed with the OCD gamer in mind, with compartments and clever card holders that allow quick tidy up, set up and protection of components. Plus the box is built to resemble a book, a cool nod to the role-players who own the weighty tomes called ‘Games Master Guides’. One niggle I have here is the card stock used for the Intrigue and Quest cards, which has a strange ‘linen’ feel and are quite thin. My worry would be the survivability of these cards after numerous shuffles, but I’m sure for casual play these are more than tough enough!
Lords of Waterdeep is a game that shows a lot of love from its designers and publishers. Theme, game-play and content are cohesive and complimentary, making a near perfect unit. This game is a classic in the making!