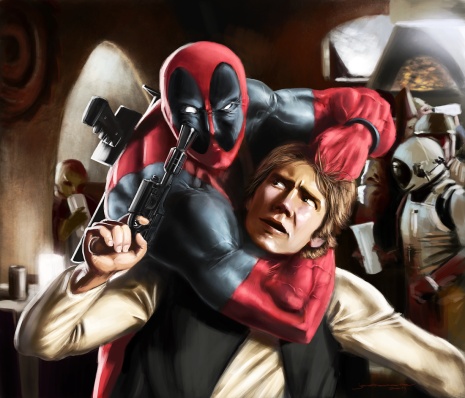 Oh Han, shoot me first if you want, it won’t matter – Lucas will just change it around anyway. Art by Jonathan Moore.

On Thursday the 23rd of January, 2014, the Star Wars Twitter account introduced the #askstarwars hashtag. Amid the usual questions on what precisely can be done to Jar-Jar Binks in a family film and how teddy-bears could adequately produce an insurrectionist movement, Marvel joined in and it became, well, really rather geeky.

Incidentally, the Deadpool/Solo pic up there is from IGN here. That article has a bunch of similarly great images by artist Jonathan Moore.

I was born very early in my life and now live on a diet of scorn and sarcasm. Follow me @ryezuul
You might also like
breakingdarth vaderDeadpool