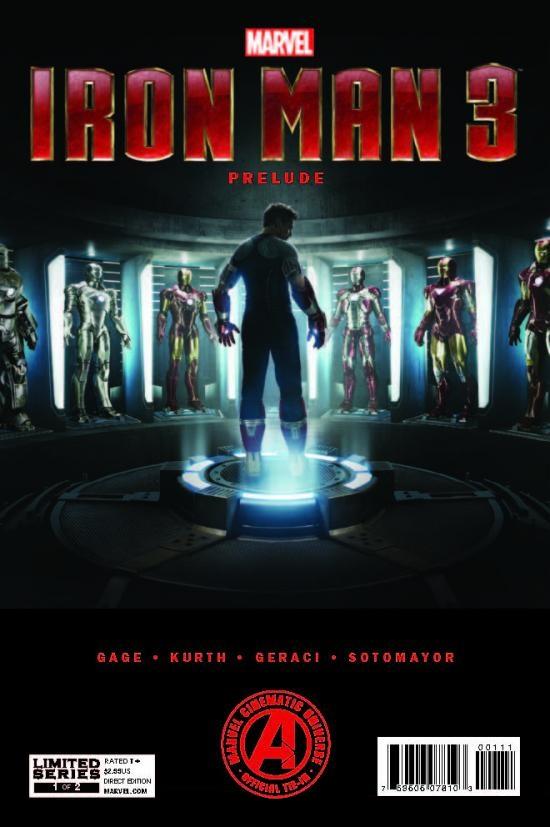 Obviously you’ve all seen the Iron Man 3 trailer and felt all the feels from “Don’t die, Pepper!” to “Holy shitsnacks, is that Iron Patriot?!” If you haven’t -maybe you’ve been trapped in an ice cube since WW2- go YouTube that shit right now, and then get your ass back here.
Marvel have decided to ramp up the excitement factor to ball-busting proportions by releasing a two-parter, explaining a little bit of what happened between The Avengers and Iron Man 3. So naturally I picked it up with an enthusiasm that can only be described as “sofa-bouncing”.
Sadly, though, it was all a bit… meh. There’s a pretty sweet opener with Tony unveiling the new War Machine armour he built especially for Rhodey, but mostly it’s just a retread of the Tony vs. Ten Rings bit from Iron Man 1, but with War Machine replacing Iron Man, and an unnamed military dude replacing J.A.R.V.I.S. It makes an effort to explain where Rhodey was during the events of the Avengers movie (fighting the Ten Rings) and why he didn’t turn up to help against the Chitauri (Tony called him, but he was all the way in Asia) It’s a nice thought, but unnecessary  the audience either didn’t care or didn’t notice that War Machine was missing from the Avengers, or we’ve already come up with our own internal theories to justify his absence. The “to be continued” final page sparks curiosity for the next issue, but not enough to make up for this lackluster installment. 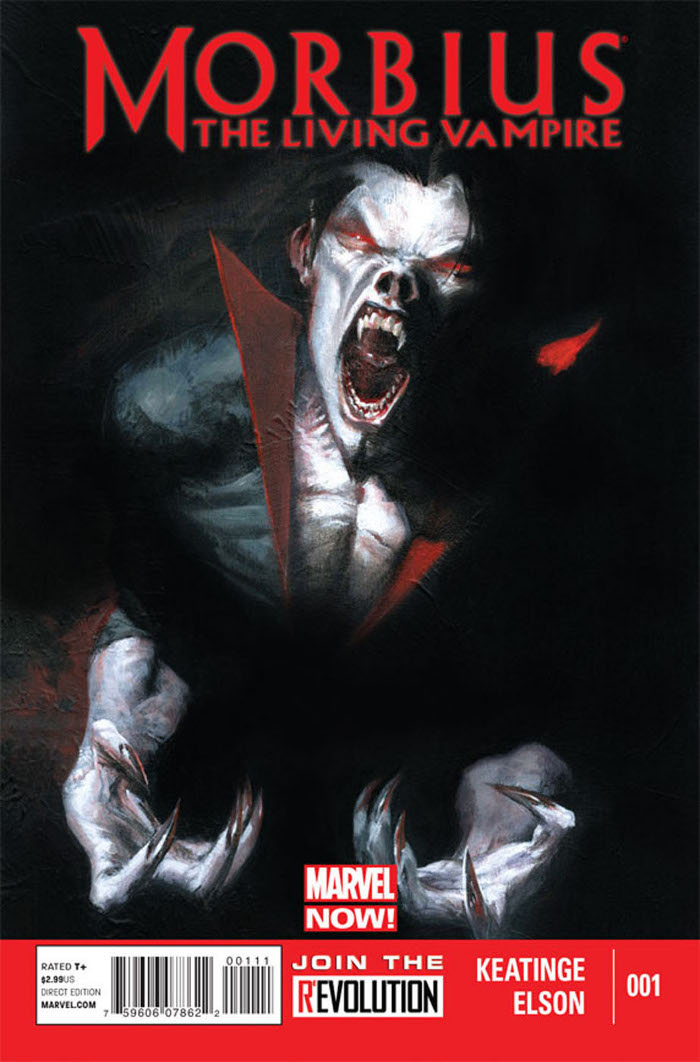 I am sick to the back teeth (no pun intended) of vampires. It’s not Twilight that’s ruined them for me, so much as all the post-Twilight vampires who are compelled to constantly reference how terrible Twilight is and how much cleverer, better written and more sophisticated they are than the Cullens. So, when Morbius opened with a tongue-in-cheek internal monologue about the perks and downsides of being a vampire, I braced myself for the inevitable snide debunking of the sparkling vampires myth. I was pleasantly shocked to find no such thing, but instead a cute little joke about pesto. Vampires aside, it’s a pretty standard tale of a villain trying to do good in the world, the type that Marvel seems very fond of recently. There’s a lot of potential for inner conflict here -the drive for blood against the will to not kill people- but so far it’s just been mentioned in passing, like a heroin addict declaring that they desperately need their fix, but will get it on Friday when they get paid. Hopefully this will become more of a problem in later issues, and we’ll get to see some fights more interesting than vampire vs. street thug. 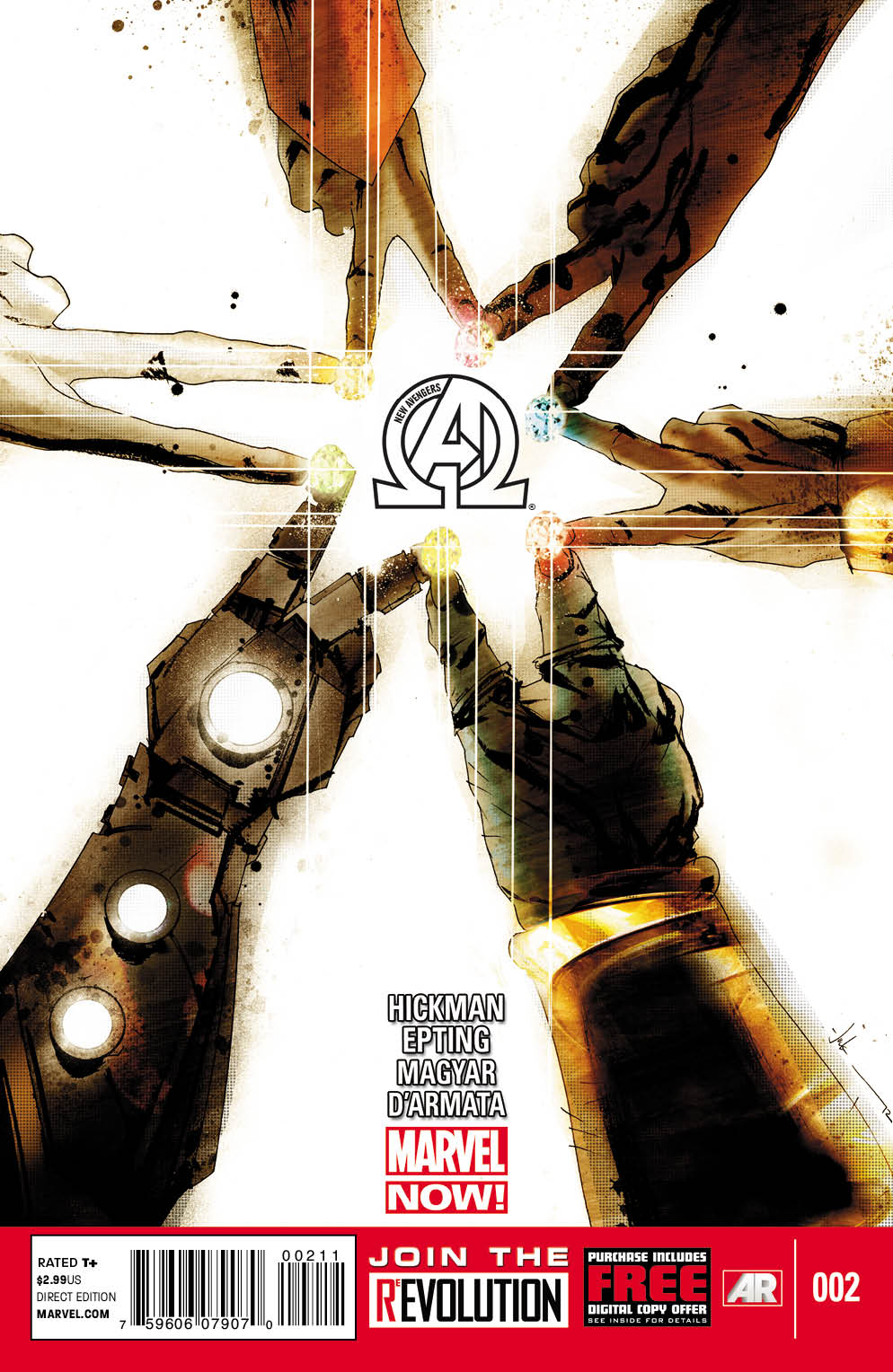 The last New Avengers followed Luke Cage and his peeps, and whilst I welcome the change of focus (and think Jessica Jones should stay out of the limelight until someone can write her a decent story) I’m a little dubious about focusing the entire series around the Illuminati. The Illuminati, aka the six most intelligent men on the planet, originally formed to guard the infinity gems, and now deal with the big problems in life, like an Ancient Sumerian called Black Swan calmly telling Black Panther that she’s going to destroy the Earth, before killing his three young proteges.
I have some quibbles with the line-up (Captain America as one of the world’s smartest men? Really?) but overall I think this series has potential, so long as it doesn’t have the heroes act out character by being too action-heavy, or get lost in wordy pseudo-science.

All-New X-Men #5: Jean Grey decides that the best possible time to absorb memories of her multiple deaths is when she’s assisting in psychic surgery.

Daredevil: End of Days #4: The noir take on the death of Daredevil continues, with a dead Bullseye and a hooker dressed as Elektra. Hilarity ensues! I’m kidding, it doesn’t. It really, really doesn’t.

Iron Man #5: Iron Man gets a new suit with a pretty sinister-looking face, a new AI based on Pepper, and jets off to explore the wonders of space.

Punisher: Nightmare #1: Punisher gets a sidekick. I’ll just leave that to sink in.

Venom #29: Venom and Valkyrie disagree on how to describe their relationship- boyfriend/girlfriend or friends with benefits? Meanwhile I discover that when I’ve beaten certain bad guys multiple times on Marvel Avengers Alliance, they stop impressing when they turn up in the pages of a comic.

At the time of character creation, Laura Maier made the mistake of putting all her points in charm. While this was probably an unwise decision, it's served her well so far. Her power animal is the platypus.
You might also like
breakingiron maniron man 3