previous
Why Aren't You... Watching NBC's Hannibal?
random
next
Geek Pride Lets its Inner Monster out at Demoncon9

Geek Pride are ahead of the game! Last month we told you about the fabulous potential of Google Cardboard: cheap and cheerful virtual reality for the masses. In fact, I described it as “half old school Viewfinder, half poor-mans’ Oculus Rift, and completely awesome!”

Well today Mattel have announced the launch of their new product, the next generation Viewmaster, utilising Google Cardboard to give kids access to the VR we all dreamt of when we were kids. 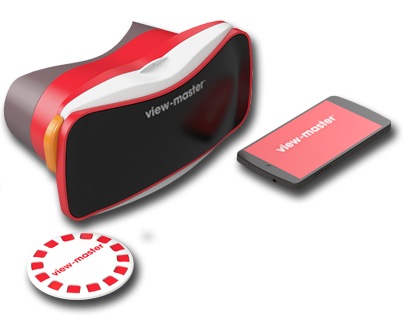 The new Viewmaster is a plastic housing built around the same specs as Cardboard (just like the new LG G3 housing shipping with new phones). The case holds a smartphone and give the viewer a stereoscopic 3D VR experience. They will be using their own Viewmaster app which sounds like it will give detailed photospheres, possibly with video or movement and with information tags, and likely going way beyond the photospheres of Orbulus, Immerview or Google Camera, maybe more like the tour of the Palace of Versailles offered on the Google Cardboard app. To keep to the original format they will also be releasing discs, which look a lot like the ones from back in the day, but these instead link to the app and install new data and act as a positional anchorpoint. So far they have demonstrated tours of Alcatraz, a simulation of the moon landing and a dinosaur experience.

I guess it’s inevitable that this technology should be targeted at children: they are the generation that will live in the world that’s going to be shaped by this, though I suspect a lot of parents will be gleefully wrapping one of these this Christmas, waiting for the chance to ‘show the kids how it works’. The Viewmaster should be selling for around £20.00, with disc packs for about £10.00, very affordable if you don’t count the £200 smartphone required to actually use it.

In my mind this technology is the first step towards the dystopian future of Ready Player One, and I welcome it. Maybe I’m too excited by it all, but the potential for education and information sharing through VR apps and toys like this is amazing. Children in their bedrooms back in rainy Britain can learn about the ecosystems of Africa, the history of Europe and the art galleries of the world. I’m sure nothing beats really seeing things in person, but this has such great potential. My hope is that through toys like this we will see this technology become mainstream and equip the next generation to use the open source system to push the limits of this technology in the everyday world, and shape an amazing future for us all.

I'm Mel, currently living in Sheffield, but originally from the other side of the Pennines. I'm a lifelong gamer, RPing from a worryingly early age, and basically raised as a geek - I don't think I ever had another option! Any spare money I have gets spent on comics, photo gear or lucha masks, and any spare time I have, when not gaming with friends, is wasted on Sims, Minecraft and trashy movies.
You might also like
3dGoogle Cardboardnews