If you don’t know anything about Minecraft you probably had a lobotomy in the last 3 years. The wildly successful game has sold over 50 Million copies worldwide and is smashing records at every given opportunity.

Its creator, Markus “Notch” Persson has been working on a new game for a while now, after the legally tied-up prototype for “scrolls”, Notch has released a new Alpha for his latest concoction, Cliffhorse. 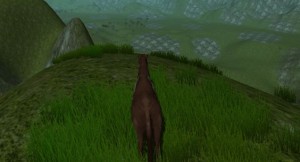 We don’t know either, sorry.

Yeah. The name, much like Minecraft, is pretty self explanatory: you play a horse on a precedurally generated set of cliffs. So far that’s it. No news as of yet as to the plot, gameplay, why it’s a horse and what Notch is thinking, but an educated guess is that lightning strikes twice and Cliffhorse becomes a Godzilla hit.

As for some gameplay footage, thanks to YouTuber MrLegendaryFin for this lovely… playthrough? (can you call it that? Is this even a game? How do flies land upside down? )

Hailing from Kent, England, Mike is a writer, editor and podcaster who has just finished his degree at CCCU. He also is a drummer of 11+years, plays in several bands, and is available for session work. His other interests are Batman, music which doesn't suck and pizza. Follow Mike @The_Dark_Mike
You might also like
Minecraftnotchspotlight