MULP: Sceptre of the Sun is an all-ages anthropomorphic comic that will be released in about two months, at the beginning of May. Set to have five parts, the tale will take us along on Jack Redpath and Vicky Jones’s adventures, both set to solve a mystery that will take them all around the world.

Created by Matt Gibbs and Sara Dunkerton, with letters by Jim Campbell, MULP is an anthropomorphic comic, a Pulp adventure set in a world of mice. Suitable for all ages, SCEPTRE OF THE SUN is the first story in this series.

On the anthropomorphic nature of the comic, Matt said, “Ever since reading Brian Jacques’ Redwall series as a child, I’ve enjoyed stories with anthropomorphic characters, especially ones featuring mice and rats. Working with Sara on MULP allows me to explore that fascination, as well as my passion for archaeology and history. Sara is also the perfect collaborator, sharing that same fascination, and I adore how she has brought our characters to life.”

“It has been a delight to submerge myself in the world that Matt and I have created, being in a mouse-made environment threw up so many questions, possibilities and inventive answers” said Sara, about creating and illustrating MULP. “Mice markets where they slice up giant fruit to order, domesticated lizards and beetles, trees that are to the same scale as the Great Pyramids, and planes made of wood. MULP has been a great pleasure to work on, I can’t wait to explore the rest of the story with our characters.”

It seems like we have a new adventure to look forward too, this time set in a slightly different environment than that that we’re used to.  The people behind the comic are: Matt Gibbs, a freelance writer and editor, that has worked on games such as Creative Assembly’s Total War: ROME II, Sega’s Binary Domain, and Ubisoft’s Driver San Francisco. Alongside his freelance editing, he is the Managing Editor of Improper Books; Sara Dunkerton, an Illustration graduate living and working in Bristol. She has illustrated comics for the Bayou Arcana anthology, Dark Harvest: Resistance, Sugar Glider Stories 2, and Into the Woods: A Fairy Tale Anthology,  and last, but not least: Jim Campbell an Eagle Award nominated letterer, whose work can be seen in titles from Classical Comics, Dark Horse, Image, Markosia, Renegade Arts, Timebomb, and Zenescope.

Gosh (London):www.goshlondon.com, Page45 (Nottingham): www.page45.com and Travelling Man (Leeds, Manchester, Newcastle, York): www.travellingman.com are some of the places that you can already pre-order your copy of the first issue.

Matt Gibbs and Sara Dunkerton will both attend the BCExpo 2014, for the convention launch of their story, with Sara sketching at their table, so do your best not to miss them if you’re there. Stay tuned for the review of the first issue, which will soon follow. 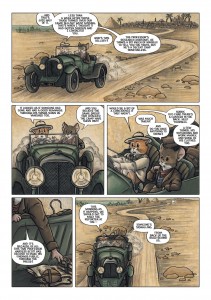