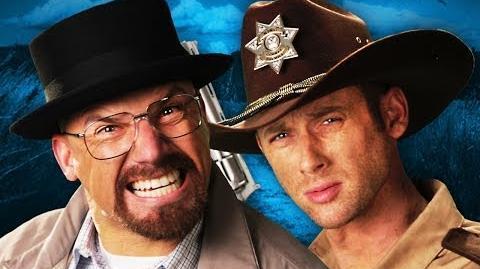 I’m a huge fan of the guys over at Epic Rap Battles of History and they’ve certainly had some gems over the years. That said, there have also been some pretty poor attempts that haven’t really played out well.

If you’re not familiar with ERB, the team consists of Peter Shukoff (Nice Peter) and Lloyd Ahlquist (EpicLLOYD) who have had their own YouTube channel since 2011. The guys create a series of videos that pit historical or cultural figures against each other in a rap battle. From Darth Vader vs Hitler to Rasputin vs Stalin, these guys cover it all. One of my favourites came back in 2012 with Master Chief vs Leonidas, partly due to the line ‘more teabags than Lipton’. Yeah, I’m immature, what of it?

However, ERB’s latest offering which was uploaded yesterday has certainly topped the list, pitting two of the biggest lead characters from television against each other. I present you with Rick Grimes vs Walter White.

With some fabulous impersonations and lines such as the repeated ‘Carl stay back’ and ‘no one saw Shane coming, except for your wife’ this really is genius. Who wins? You decide!