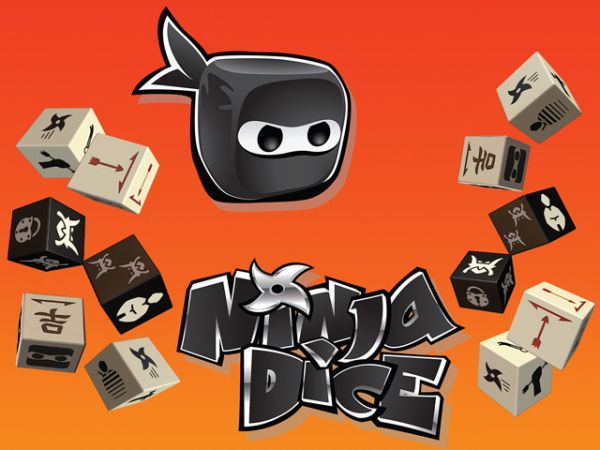 If you see a ninja, you’re already dead…. unless it’s on a dice, in which case you may have to try again. Ninja Dice is the push-your-luck designed by Rocco Privetera and published by GreenBrier Games. It’s a cool premise; ninjas and dice, what else do you need? Let’s dive in and take a look.

In a bit of a twist, I’m going to start with the look and feel of this game. Ninja Dice comes in an amazing little black fabric cube made to look like the head of a cartoon ninja, complete with angry eyes and a knotted bandanna. It looks awesome on the table, even when you unzip the top of the little fella’s head to get at the dice inside. Whilst we’re on it, the dice are high quality with no sign of colour leak or mis-print as you sometimes find in custom dice games; perfectly sized and weighted, it adds to the quality feel of ND and lets you know the publisher hasn’t just rushed this game out. Finally, the little plastic coins used to mark the treasure players receive for beating the House dice (more on this below) actually feel OK and not tacky, a rare accomplishment for coins which aren’t any more substantial than the toy money you could pick up at your local toy store.

Next are the rules. The dice come in three flavours: House, Skill and Threat. House dice are rolled to determine what challenges the current active player-ninja has to overcome to score gold, by this Residents, Guards or Locks.

Skill dice are rolled by the active player-ninja to determine what Skills they use this round. These include Sneak and Fight (used to evade/beat up the Residents and Guards), Pick Lock (to break any Locks, dur!), Arrow Catch (to prevent Arrows affecting you, see Threat Dice below) and Fortune (these are matched up to the previous Skills, quardrupling their effect). Each of these are matched up on a one to one basis, so if the House dice have three Residents, two Guards and three Locks, you’ll need to roll at least five Evades or Fights (or a mix, so long as you only use one Skill for each House occupant, so you couldn’t use two Fights and an Evade to take out the three Residents for example) and three Locks. Or you can use Fortunes to quad-up the Skills, so you’ll only need to roll one Pick Lock and a Fortune to pick all three Locks in the example above. Confused? It’s definitely a game that needs to be played to understand, but it only takes a round or two to get your head around.

The last dice are the Threat dice. These are dished out to all the other players, who roll them at the dame time as the active player-ninja rolls the Skill dice. The dice include faces for Arrows (which allow you to steal from all the other players), Hourglasses (if four of these appear during the active player-ninja’s turn, it ends and they earn no treasure) and Catch Arrows (these, like the ones on the Skill Dice prevent you from being targetted by the Arrow effect).

Players score is based on how many challenges they beat in the House, with bonuses for beating the whole House or not using Fight dice. The active player-ninja doesn’t need to stop on the first roll however; they can choose to move their dice to any location on the table (why this is important is discussed below) then reroll any dice they wish to try and get better results. The downside is your opponents also reroll their Threat dice, giving them more opportunities to steal treasure or even catch you with the Hourglasses. This is the push-your-luck element of ND, and can get quite tense if you only need one more Pick Lock to completely beat the House!

An interesting mechanic of this game is that the position of the dice on the table matters. Some of the faces of the Skill and Threat dice have lines across them; any opponents’s dice in front of this line mean the owning player can target them. For example, if a player rolls an Arrow on their Threat die, they could only steal treasure from opposing players whose dice have landed in front of the line across the Arrow face. It’s clever, but can cause quite a swing in the gameplay and be very frustrating when that Fortune result you sooooo needed just happens to facing the complete wrong way.

The rules leaflet is well written and structured in an intuitive manner, meaning you can dive straight in (albeit with the caveat of needing a few games to get it down). It does need a couple of read throughs though, as some of the rules aren’t clear on their own; the examples help a great deal in this respect, such as whether a Wild face can be used as a Catch Arrow (it can’t BTW).

The game takes about 30 minutes to play, which to me feels about 10 minutes too long. ND is a filler game, not one to fill an evening of gaming. ND does a great job of keeping all the players engaged with the use of Threat dice, but being a dice game the only real choice you have is whether to plush your luck or not; min-maxing your dice against the House is almost a no-brainer (you may have to choose how to apply Fortune results, but even then it can only affect the dice in front of the line on the Fortune face of the die), and choosing who to hit with Arrows often only came down to one player to choose from with the prevalence of Catch Arrows on the other dice. Now I’m not saying a luck based game is a bad thing, but if it’s near-enough pure chance, it has to be short. ND is just that bit too lengthy and I found I was starting to lose interest around the middle of the second round, especially if one player was starting to run away with it.

Ninja Dice looks amazing, is simple and easy to teach and has some interesting mechanical twists on the yatzhee dice concept. Unfortunately, it just takes too long for a light filler game and despite the use of Threat dice to remove virtually any player downtime, I still lost my engagement before finishing the final round of play. If you get a chance to play, I’d recommend keeping this to three players, four max.

Images from boardgamegeek.com and greenbriergames.com